Climate change, the greatest threat to global health in the 21st century, is affecting every corner of the world. According to the World Health Organisation (WHO), between 2030 and 2050, climate change is expected to cause approximately 2.5 lakh additional deaths per year due to malnutrition, malaria, diarrhoea and heat stress alone. It is high time we act to restrain the effect of this phenomenon.

Here are some interesting lessons on climate resilience from Indian communities:

In Jagatsinghpur district of Odisha, 20 villages came together to plant over 50 acres of mini forests as natural cyclone barriers.

In 2020, Science of the Total Environment published a research paper stating that the district will see an increase in flood hazards from 12.55 per cent to 27.35 per cent by 2040. In addition to this, the port city of Paradip in Jagatsinghpur received the title of one of the ‘severely polluted’ cities in the country by the Central Board of Pollution Control. All these reasons prompted the villagers to create mini forests. “Except for the occasional aid provided by the forest department, there was no external intervention,” reported News18. Jharbhagda, a village in West Bengal’s Purulia district solved its water woes and overcame the harsh heat waves by reforesting a barren mountain. The village was surrounded by 50 km of barren land which brought in extreme weather conditions. 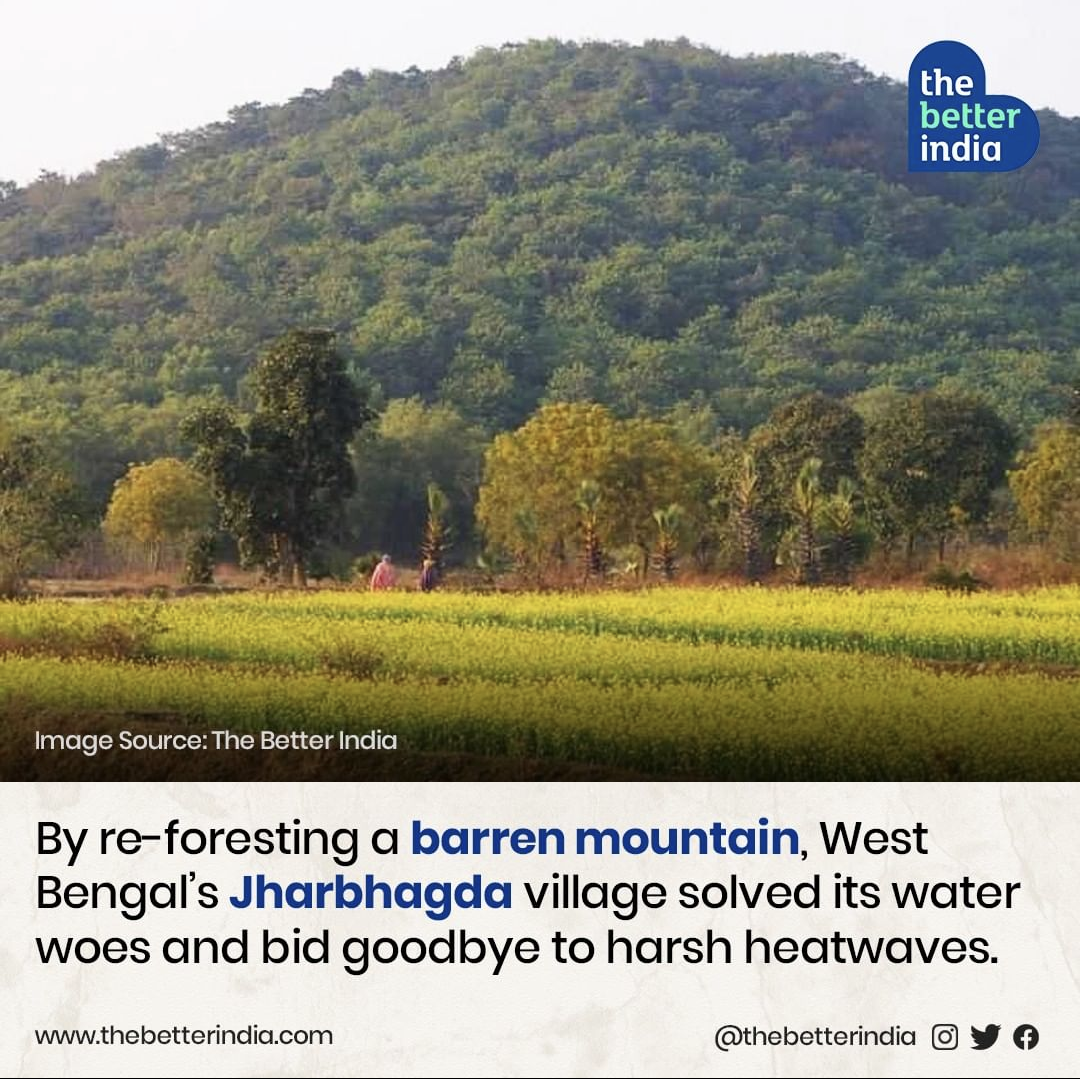 Till 1997, the 300 families in the village tolerated the weather. Today, the hill and its surrounding 387-acre land are covered with lush green forest which is home to several wildlife species. It was implemented with the help of an NGO called Tagore Society for Rural Development (TSRD). The village now has cooler air and high groundwater levels.

By increasing the water-carrying capacity of river Kajali, Sakharpa and Kongao villages of Maharashtra have become flood-free after 70 years. Over 200 people were killed in the 2021 rains in the city of Chiplun, Maharashtra. Every area, except the above-mentioned villages, was affected even though a river flows between them. This is the result of restoration work that happened in the river between 2019 and 2021 after witnessing a harsh flood in 2015. Naam Foundation, an NGO that works for the cause of solving the water crisis in the rural areas came to help the villagers in the process. Another NGO called Natural Solutions also lent a helping hand.

The artificial ice stupas in Ladakh provides one million litres of water to irrigate 1,500 plants during the summer months April and May. 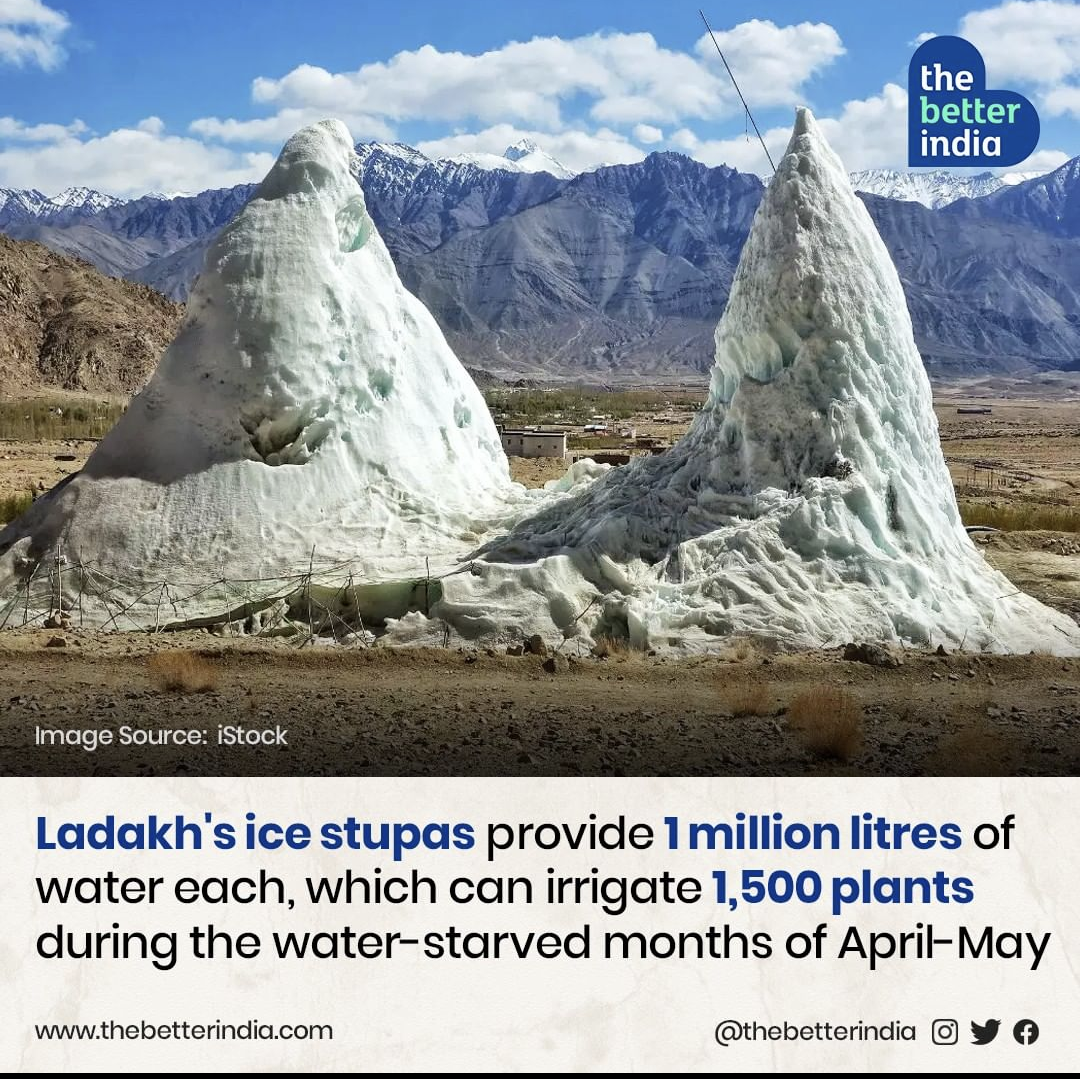 The artificial glaciers or stupas is a simple irrigation system to store water during summer. During the spring planting season in Ladakh, farmers use this method to conduct successful cultivation. This technique becomes significant as the population of the place is around 3 lakh but the precipitation per year is just 10 centimetres. The technique to freeze and store winter fresh water in huge, towering structures was first developed by engineer Sonam Wangchuk in 2013.

Central Maharashtra is a drought prone area. But the watershed management of the residents of Hiware Bazar has made its place as one of the most prosperous villages in India. Hiware Bazar is a semi-arid region in Ahmednagar district of the state. Constant drought and crop failure were usual stories here. In the year 1998, as part of the Employment Guarantee Scheme (EGS), water conservation work started here which changed the life of the villagers, especially farmers. “Today, a fourth of the village’s 216 families are millionaires,” reported DownToEarth. The per capita income of the village is twice the average of the top 10 per cent in rural areas nationwide (as in 2008).”

Meghalaya is a state that receives the highest rainfall in the country. But it runs the risk of frequent flooding and cyclones. During monsoons, heavy-flowing rivers and storms take out all the bridges except the unique living root bridges. To counter this, there are more than 100 natural bridges in 70 villages of Meghalaya. It is a combination of nature and human creativity. Firstly, a bamboo structure will be placed across the river. Later, the roots of a tree, usually the rubber tree, will be entwined with the structure until it becomes strong. The roots are left to grow slowly. The root bridges were submitted to UNESCO’s tentative list for the coveted world heritage site status.

“Villages in Odisha Grow Mini Forests Over 50 Acres to Fight Climate Change”, published by News18 on 10 May 2021.

“Hiware Bazar – A village with 54 millionaires”, published by DownToEarth on 31 January 2008.

“‘The knowledge of our elders’: India’s living root bridges submitted to Unesco”, published by the Guardian on 1 April 2022.