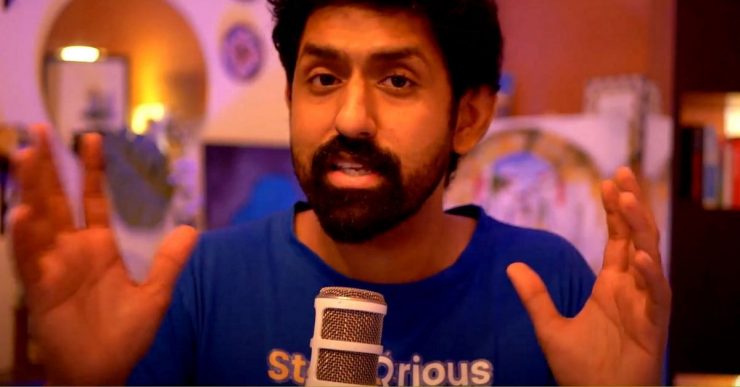 Even before online classes became a thing, an engineering graduate from Bengaluru formed the ‘Neoschool’ model, which operates virtually. While he was in the process of enrolling students, the COVID-19-induced lockdowns brought the entire schooling system as we knew it to a halt.

Luckily for Aanand Srinivas, founder of a startup company called StayQrious, he set foot into the digital education space as a teacher and content creator right after completing his computer engineering degree.

“I specialised in Artificial Intelligence (AI) during my course and understood that lecturing doesn’t work as an effective method in teaching. I wanted to develop an alternative wherein teachers take the role of a learning coach. I first began creating content and also worked for online study platforms like Byjus and Unacademy,” says Aanand, who adds that he was always interested in the field.

“This model is the first-of-its-kind in the world and operates on the importance of customised and focused learning,” he says.

The 32-year-old’s idea was to build an entire school online and give importance to areas that were not covered in regular school curriculums. In 2020, his company launched Neoschool, an after-school online initiative which provides an international standard of education at a lower price. He could easily source coaches who once were his co-workers — some of them joined as part-time teachers while others as full-time employees.

“Before the lockdown, we used to conduct masterclasses at auditoriums wherein the whole idea of Neoschool was explained to students. Enrollment was strictly based on the interest of students and not parents. For selected students, we provide a scholarship where they get a 25 per cent discount too,” explains the founder.

Neoschool engages students between the ages of 8-14 for 2-4 hours per week. One coach is in charge of a group of six students. They are made aware of the new professions emerging in the world in both soft (related to technology) and hard streams (related to science). “This is not done in any regular schools because they hardly get time to cover portions,” he says.

A boon to students and teachers

At present Neoschool has over 100 coaches and more than 1 lakh students, both sections of whom come from all over the country, especially metro cities. Other than dispensing with the international standard of schooling at a normal price, Neoschool also benefited teachers who faced difficulty in finding jobs during the pandemic.

“There are chances that the process of learning does get boring but if done in the right way, it works better than a normal classroom environment. Kids in the Neoschool are grouped according to a common interest they share, which connects them and helps them socialise,” gushes Aanand.

Elaborating on this, Gomathi Vinod, mother of Class 8 student, Aman Vinod, shares, “We went all the way from Bengaluru to Chennai to meet Aman’s friend from StayQrious. Children are so attached as they share at least one common interest. The classroom atmosphere is also too friendly and the coaches are approachable.”

Gomathi got to know about the initiative through a resident of their community in Bengaluru. “I got the confidence to enrol him after seeing the excitement of my child while attending the demonstration class. And the background of the founders was also great,” she adds.

Aman finds coding and science very exciting. He says, “The StayQrious team present the curriculum in a unique way, which I would have otherwise struggled with learning. I even interact with them to understand general topics, even video gaming,” says the 14-year-old, who spends two hours each week on both coding and science subjects. The major advantage of platforms like StayQrious is that it is up-to-date. Aanand says, “Our educational system takes at least 15 years to implement a new curriculum. It creates an issue of not coping with real-world skills. Also, in our country, the curriculum is not formed by science but by traditions.”

“Our system doesn’t operate according to the mental wellbeing of a student. Each of them has diverse interests and capacities. We should focus on that,” he adds. But he doesn’t blame teachers because managing more than 20 students and completing portions on time is a laborious task. That’s where spaces like Neoschool come in.

“We plan to introduce new verticals in applied Maths and Financial literacy. We usually teach kids theories in Maths which are hardly used in real life. It also takes away their interest in the subject. But through these subjects we can bring back their interest, which they can utilise in life,” he says in a hopeful voice.

“We are aware that not all families can afford this. Most of our clients are from middle-class families. But by having more users, we plan to make it available at half the price. Every kid deserves access to improved education and StayQrious is on the journey to make it happen,” he concludes.