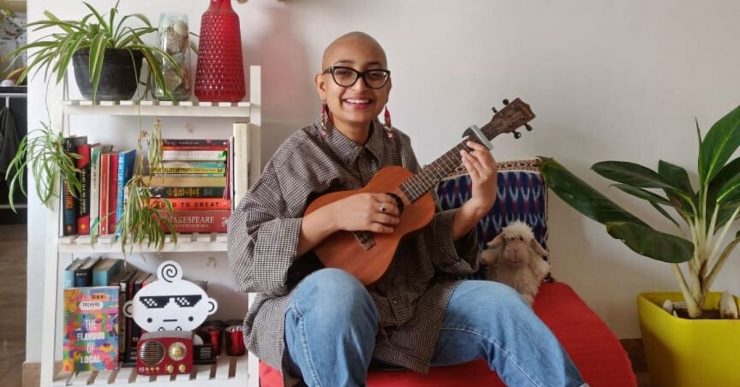 Humour is a potent tool that can convey the most complicated thoughts and mask even the most difficult feelings, provided it is used responsibly. At a time when the entire world is discussing the consequences of misplaced humour witnessed at the Oscars, the 94th Academy Awards 2022, the story of 32-year-old Paromita Gupta, someone who does have Alopecia, comes as a reminder of what humour should not look like.

“At first, when people made fun of my looks, I used to feel bad. That feeling, in time, developed into something else – I began to join in their laughs. What I thought to be a bold and brave act as a kid turned out to be more damaging. Because every time I laughed with them, I encouraged and supported the act of being made fun of, and betrayed my self-esteem,” shares Bengaluru-based Paromita – who has spent the last 23 years living with Alopecia. This auto-immune disorder usually leads to extensive and unpredictable hair loss.

Diagnosed at the age of 10, she has had countless encounters with misplaced humour pitted against her looks and medical condition. But in the last seven years, something changed inside of her. The girl who once joined in when people laughed has transformed into a bold woman comfortable in her skin and ready to fight back with words of awareness and education.

Alopecia and Battling The Thought – ‘Why me?’

Paromita was born in Kolkata and brought up amid the picturesque tea gardens of Darjeeling with her parents and elder sister. As her father worked as an official in a tea plantation company, a transferable job, her family was always on the move.

“My parents did the best they could. They enrolled my sister and me into a boarding school very early due to the frequent job transfers. I started going to boarding school in Kurseong at the age of 4,” she shares.

But staying away from her parents was never easy for Paromita, who could never quite overcome homesickness. And so, a few years later, when her father was transferred to Kurseong and the possibility of becoming a day scholar surfaced, she was overjoyed.

This joy, however, was short-lived, as the then Class 4 student underwent one of the scariest experiences of her life.

“My winter vacations were just over, and school had started when I began to show signs of Alopecia. I would wake up to a pillow covered with hair. Every time I would run my fingers through my hair, clumps of it would come unattached as if they weren’t even a part of my scalp. Then, I was completely bald in just one week, and my world fell apart,” she recalls.

Panicked and scared, the first thought to cross her mind was — “Why is this happening to me?”

Her condition was a mystery to the people around her. Some doctors suggested the hair fall was a side effect of Typhoid – a disease she had not caught until then. “I got Typhoid only one year later. Then how could that be the cause,” she asks rhetorically.

A few months later, another doctor based out of Siliguri diagnosed her with Alopecia Areata and immediately started the treatment. They were emotionally overwhelming and traumatising days for the young girl, trying to cope with the medication while wondering how she could go back to school looking like she did.

“I was so young that I couldn’t even keep track of my homework, let alone the tonnes of medicines I was prescribed. That would then be followed by so many injections that I lost count. Then there were people providing all kinds of advice citing Ayurveda and Homoeopathy,” she shares.

From recommending several hair oils to asking her to rub onion and ginger paste, relatives and acquaintances kept suggesting ideas to overcome the condition. In desperation, she tried it all.

“I remember stinking all the time with a head full of these condiments. It was as if I was mutton being marinated with onion and ginger. I’m not mutton. I was a small person, scared and confused,” she recalls.

After numerous failed attempts to regrow her hair, Paromita had to finally do the unthinkable for a young girl, step into school without a head full of hair. “Many were shocked, some were laughing, and others asked what happened to me,” shares Paromita, adding that adults tried to dilute the situation by making it funny – adversely affecting her self-confidence even further.

Once a bright and motivated student who participated in several extracurricular activities like elocution and debate, she found herself guarded and closed, fearing ridicule at every step. Paromita even recalled an incident when she froze on stage overwhelmed by the thought that people would laugh at her.

“But on the flip side, I also had a large group of friends who stood up for me and teachers who loved and supported me. And because of them, I began to feel stronger, and in a way, it never led to bullying,” she adds.

However, just as things began to look better, she had to change schools and shift to Siliguri to complete her Class 11 and 12 education.

“My hair would sometimes grow back and then fall out again. At the time, I had two patches of hair on my head that I refused to shave because I was scared that nothing would grow back if I did. I walked into the new school with that and still remember the confusion and shock on their faces. But by now, I had realised that breaking down or laughing at myself was not the answer. Instead, I had to stand up for myself. Every time someone tried to poke fun at me, I retorted. I pretended to be strong and put on a brave face, and that was probably the start of change,” adds Paromita, who eventually had her hair grow back by the time she was in college. She completed her graduation and post-graduation from Kolkata while constantly taking treatment from a city doctor.

Yet every sliver of hair that regrew came with the possibility of a relapse, triggering yet more injections, nauseating medicines, and stress. Even though the treatment was painful, Paromita continued it with her head held high and managed to maintain her hair for the next few years.

Stand Up For What’s Right

After completing a book publishing course in Kolkata, Paromita got an internship opportunity in Bengaluru, which eventually converted into a full-time job. Things were finally touching positive normalcy when she lost her job a year later because of company downsizing.

“Once again, I began to question myself and my capabilities. Although I soon got another job, its stress mixed with the constant self-doubt and fear aggravated and triggered another relapse. After years, I was finally at a good place and had even got my first haircut in many years, and then suddenly this crept on me again,” Paromita says.

Her hair began to fall once again, and it was time to rush to the doctor for another injection. Only this time, she decided to do things differently.

“After years of trying to tackle this (Alopecia), I had reached a point of exhaustion as there is no absolute cure. I analysed my situation and realised that not having hair didn’t cause me any physical pain or didn’t affect me beyond the mental and emotional challenges. Starting the procedure once again was even more stressful, and that would usually make things worse, so I decided to put an end to it, head to the salon instead, and shave my head once and for all. I remember my friends, elder sister, and brother-in-law accompanying me to the salon to provide moral support. After shaving my head, we headed to a restaurant for dinner. At first, I was apprehensive but was pleasantly surprised to see that not many at the place gave me weird stares or posed uncomfortable questions. The overall acceptance and lack of too much attention in Bengaluru, as opposed to the constant poking and advising I experience in Kolkata, instantly put me at ease and helped me see myself in a new light,” she adds.

Bolstered by newfound confidence to be herself, her next step was to confront her workplace, where a team of around 50 to 60 people were about to be confused with this appearance. Her friend suggested writing an email to the entire team, providing context to her condition and requesting privacy. Her email articulated that they could approach her personally if anyone had questions about her condition.

This strategy worked as the following day, when she entered the office, it felt like almost nothing had truly changed. No turned heads or sly giggles, it was just another day, and Paromita was extremely positive and self-assured. Although some individuals did approach her with questions or a word of appreciation, everything was taken in a positive stride.

“Alongside this step, I also started to undergo therapy in 2017, which helped me confront all the repressed feelings and cope with the changes that were coming,” says Paromita.

She has also developed a condition of Vitiligo now (a condition that causes the skin to lose pigment in certain areas, manifesting white patches) but continues to stay strong and positive. No matter what may come, she is now resolute about loving and respecting herself.

Narrating a recent negative incident that failed to shake her resolve, Paromita says, “I often get unsolicited advice that I should try and ‘fix’ myself if I want a wholesome life with a partner. Some people even ask if I’ve donated my hair to the Tirupati temple. I take most of it in my stride and let it pass as a funny moment, but some lines should not be crossed. One such incident happened with a former colleague one day when he suddenly rubbed his hands on my head while passing by me. It was an act of ridicule, and on top of it, he had crossed physical boundaries. I was infuriated and objected to it right then and there in front of the entire office because that was wrong no matter what. I was mad with anger, but instead of taking up violence, I used my voice.”

At that moment, Paromita’s eyes had welled up in tears of frustration and anger, but that one act of courage, among numerous others, helped her find herself.