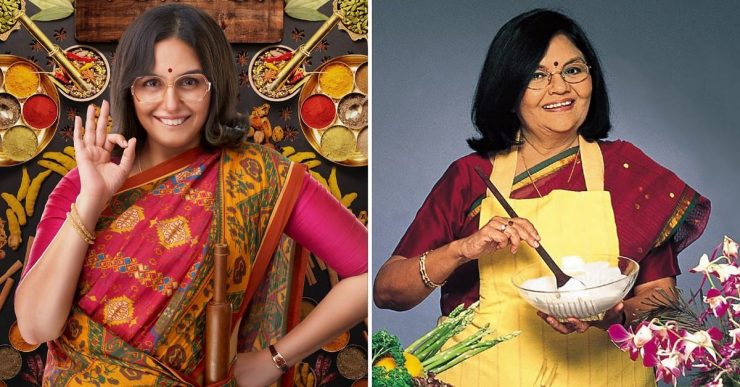 One of India’s most celebrated chefs and cookbook authors, Tarla Dalal was known for balancing the art of cooking with entrepreneurship. Often revered as the Julia Child of Indian vegetarian cooking, the housewife turned author transformed her traditional Indian cooking skills into a business empire and even won a Padma Shri.

Through her love for cooking and a flair for experimentation, she revolutionised every day, non-fussy vegetarian cooking for Indians. From making perfect idlis to Mexican wraps, she helped simplify cooking with her easy-to-follow recipes and inspired
Soon her inspiring story is going to be made into a film titled ‘Tarla’. With Huma Qureshi all set to play the lead role of Tarla, the movie is expected to explore the eventful and charismatic journey of her legacy.

The film will be produced by Ronnie Screwvala, Ashwiny Iyer Tiwari, and Nitesh Tiwari and marks the directorial debut of writer Piyush Gupta. Born in Pune, Tarla Dalal moved to Mumbai after her marriage to Nalin Dalal in 1960.

Later, in 1966, she decided to do something with her passion for cooking and started holding cookery classes for her neighbours. Tarla presented Indian recipes along with simple Thai, Mexican and Italian dishes in her classes, which eventually turned out to be a huge success as more people started enrolling.

Learning the popularity of her classes, Vakil & Sons, one of India’s most prominent publishers back then, collaborated with her in publishing her first cookbook — The Pleasure of Vegetarian Cooking. The 1974 book was a comprehensive collection of vegetarian recipes from Indian, Chinese and Western cuisines. The book was also translated into several Indian languages like Hindi, Gujarati, Marathi, Bengali and foreign languages like Dutch and Russian.

This motivated her to come up with more cookbooks and she eventually wrote around 170 of them.

Using her deep understanding of cookery as an art and science, she wrote books covering a range of subjects such as breakfast ideas, cooking with less oil, desi food, recipes for pregnant women, and children and she even wrote a health series.

Over the years, millions of copies of her cookbooks were sold, thus making Tarla Dalal a beloved icon among Indian housewives and working women. Moving right with the times, Tarla also launched a line of ready-to-cook mixes under the brand name Tarla Dalal Foods (TDF), which made over 18 types of instant mixes at its factory in Ambernath near Mumbai. In 2013, it was acquired by Corn Products Co. (India) Ltd.

She was awarded the Padma Shri award in 2007, which made her the only Indian from the field of cooking to have been conferred the title.

Credited with creating a mind-boggling 17,000 recipes, Tarla launched her website — www.tarladalal.com — which is claimed to be the largest Indian food recipe website featuring all her vegetarian recipes spanning in a variety of native and international cuisines.

She also brought out a bimonthly magazine called Cooking & More and started hosting cooking shows on television and had her own show named ‘Cook It Up With Tarla Dalal’, which made her a true celebrity.

In 2013, at the age of 77, Tarla Dalal passed away at her Mumbai residence following a heart attack, leaving behind a 40-year legacy of culinary art. She is survived by her three children and her son Sanjay Dalal now manages the website, the publication of the cookery books, culinary classes and social media accounts.

According to her son Sanjay, the website now has about 18,000 recipes, in addition to articles on food and a growing glossary of terms in Hindi and English. “What we were doing when mom was alive continues. We shoot and upload videos and information on the website with a focus on healthy recipes,” Sanjay told The Hindu.

Remembering Tarla Dalal: The housewife who taught India how to make pasta by The Hindu, published on 5 November, 2020.
‘Never a dull moment around Tarla’ by Mid Day, published on 29 May 2022.