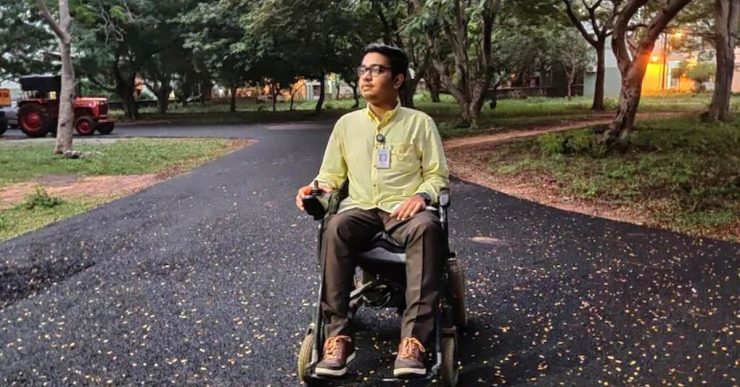 For Roorkee resident and ISRO scientist Kartik Kansal, backlash and neglect are not new. He was 8 years old when he was diagnosed with muscular dystrophy, a disorder that progressively stops the functioning of the limbs. Attempts were made to diminish its progression, but Kartik ended up in a wheelchair soon.

But nothing could bring down his spirits, and he eventually enrolled in the Indian Institute of Technology (IIT), Roorkee. After graduating in 2018, he cleared several competitive examinations like the Graduate Aptitude Test in Engineering (GATE) and Union Public Commission Engineering Services (IES).

But his disability became a hindrance during placements. “I did well in the prelims of the engineering services exam, but when the list for the mains examination came, I got to know that I wasn’t eligible for any of the posts due to my condition. It was a difficult phase for me. Mentally, I was prepared, but what can I do about my physical condition? My whole world was shattered,” Kartik told India Today.

Aiming to change the policy, Kartik began preparing for the Union Public Service Commission’s (UPSC) civil service examinations. His aim, reports Times Now, was to bring in change and improve accessibility to a dignified life for persons with disabilities.

Even though he was rejected in the IES, Kartik was successful in gaining a position as a scientist at ISRO. Alongside, he continued preparing for the UPSC.

Kartik sat for the examinations thrice. In 2019, he bagged an AIR (All-India Rank) of 813. This offered him a good post in the field, but he desired an administrative role. Moreover, contrary to his expectations, he couldn’t crack the Mains in 2020.

The ISRO scientist was not ready to give up yet. In between work, he found at least four hours to practise written examinations. His current job and dream career walked hand-in-hand.

Finally, when the UPSC CSE 2021 results were out, the scientist rescued an AIR of 271, which has brought him closer to his aim.

The 25-year-old scientist told Prag News, “Disability is more about mentality than external factors. As I have seen, society isolates such children. There is a psychological barrier that comes with this. I want to focus on changing that mindset to make India more accessible to everyone.”

He credits his victory to his family, who have provided relentless support throughout these years.