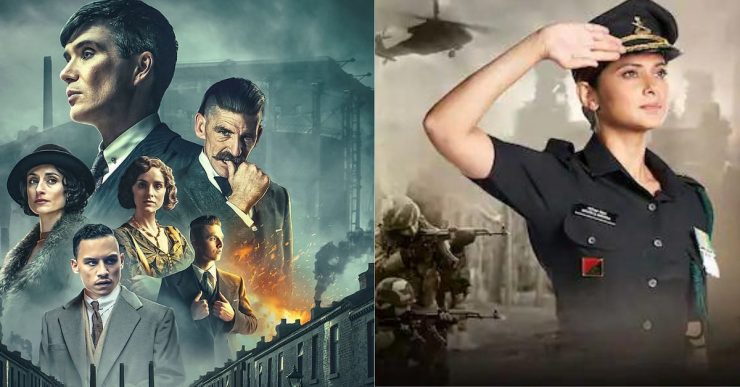 As you flip through the latest releases on your OTT screens, you will be met with a range of different genres. Choose to spice up your weekend with horror and thrill or take it slow with a rom-com. There’s something for everyone here.

Following Polly’s death, someone must step up as the family matriarch. With the boys at war, Ada must now take up the responsibility of heading the family and taking executive decisions for the Shelby Company.

With this new responsibility, it is a hint that Polly was right when she said a woman was always needed.

The drama series portrays the dark side of fame and what it means to be in a position of power with your reputation on the line. When a rising politician, essayed by Itziar Ituño’s sex tape is leaked to the media, will all her hopes of power come crashing down?

To undergo the vampire rite of passage, Juliette must choose the first human she wishes to kill. Meanwhile Calliope, in the same town, must do the same as she comes from a family of monsters.

However, before the two set their sights on each other for the kill, they can’t resist the sparks that fly between them.

In the second season of this investigative series, Indian Army Officer Major Monica Mehra emerges the hero after protecting the Chief Minister from being assassinated. However, she later discovers that the case is more layered than she imagined and evil is within the national security force instead of outside it.

“Jennifer Winget doesn’t disappoint again in Code M 2. She perfects the body language and expressions of an army officer. The entire show rests on her shoulders. It was a pleasant change to see a woman leading the show while pinning down the baddies single-handedly,” writes Grace Cyril for India Today.

5. No Time To Die, Amazon Prime

The James Bond flick does not disappoint its fans. On a mission to rescue a scientist who has been kidnapped, Daniel Craig must follow a risky trail that is not for the faint-hearted. To add to this, there is the threat of dangerous technology that threatens the group.

“No Time To Die is best summed up as the perfect Bond experience,” writes Sunayana Suresh for The Times of India.

Step into the newsroom and watch what happens behind the scenes as two rival news channels try to reach the masses. One is only concerned with TRPs and the other believes in credible and honest information. Will truth triumph?

“If you are even remotely interested in the ideologies and ethics of the news industry, needless to say, this show will be enthralling for you,” writes Archika Khurana for The Times of India.

If you aren’t in the mood to watch something heavy, join the Pathrose family for a day. This comedy-drama is a typical desi household scenario where each member has their quirks and struggles to live under the same roof, but can’t stop loving each other all the same.

What if instead of the US, the Soviets were the first to land on the moon? While the series explores this alternate fate, it also is a peek into how these two are on their way to establishing supremacy on Mars. A tale of how, in the race to space, friends turn into foes.
“What’s special about the series is the way the writers craft scenes that are so expertly written, so exceedingly intense that you might need to physically recover at the end of an episode,” writes Kelly Lawler for USA Today.

A complicated family dynamic, a mother who misses her children being little and siblings who have outgrown each other, the series tells the story of how sometimes the ups and downs make relationships special.

The Chinese drama portrays the life of Fei. While he works hard to earn a living and take the money home to his family, he also hides a secret. Fei is homosexual. Will the family be able to tide over their beliefs and accept him? The series takes you through this.

Code M Season 2 Review: Jennifer Winget’s show is full of suspense and high on josh by Grace Cyril, Published on 8 June 2022.
The Broken News Season 1 Review: A Riveting Drama With Credible Performances by Sonali Bendre, Jaideep Ahlawat and Shriya Pilgaonkar by Archika Khurana, Published on 10 June 2022.
Why Apple TV+’s space drama ‘For All Mankind’ is the best show on TV right now by Kelly Lawler, Published on 9 June 2022.
No Time To Die Movie Review : The most befitting swan song for Daniel Craig by Sunayana Suresh, Published on 30 September 2021.