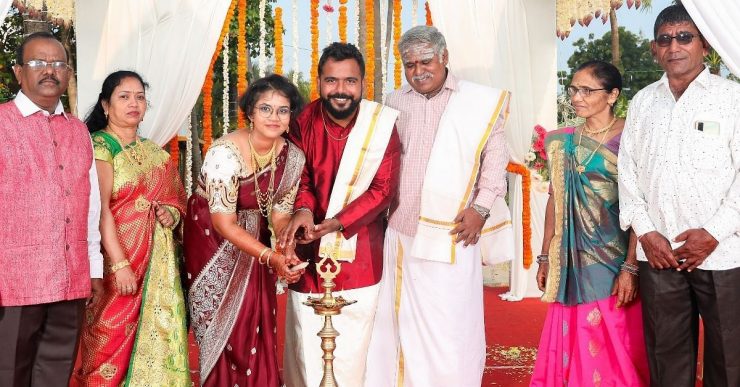 Nivetha met Yatharth while doing her internship with an Auroville architectural firm in 2017. She was four years his junior, but he found himself smitten by her dedication, passion, and candour. Meanwhile, she found that she was on the same page as him when it came to politics, religion, lifestyle, caste, marriage rituals and so on.

Like in most love stories, it was their common ground that brought them closer together. For example, neither follows a religion — both of them are atheists. Both call themselves stubborn when it comes to their choice.

Nivetha is from Chennai, and Yatharth is from Khargone, Madhya Pradesh. While she grew up with her parents and sisters, he was raised in a joint family of over 15 people. Together, they run a venture of building eco-friendly houses and structures.

On 5 February this year, they took a step forward in their journey and got married via a ‘self-respecting’ wedding ceremony. Called suyamariyathai or Thamizh in Tamil, these marriages are typically between inter-caste couples and the rituals are non-patriarchal in nature. “Priests, saat pheras, mangalsutra, kanyadan, etc. which are usually found in Hindu weddings, are not there in self respecting one. We were married by an officiant in the presence of our elders, family members, and friends. The idea is to do away with Brahmincal customs and traditions that are unequal, unfair and unjust,” Nivetha tells The Better India.

Started by EV Ramasamy Naicker (Periyar), a self-respecting wedding does away with all the usual rituals of a Hindu wedding, and is legal in Tamil Nadu under the state amendment of Hindu Marriage Act. Periyar introduced this concept as part of the ‘Self-Respect Movement’ that vouched for equality between men and women, and a caste-free society.

The duo notes that while a self-respecting wedding has a political aspect, they stayed away from this by not including any idols or photos of political leaders.

How different backgrounds and cultures come together When Nivetha and Yatharth first decided to get married, they came across this concept through a friend, and did their research on the internet. In an interesting turn of events, when Nivetha discussed this possibility with her parents, they revealed their wedding, too, was a self-respecting one.

“I grew up in a household that practices both Hinduism and Christianity. Being from different religions, my parents had a self-respecting ceremony in 1987 where no priest was involved. So, it was easier for them to understand our decision,” she says.

Meanwhile, Yatharth’s father is a conventional wedding planner, so it was harder for him and his family to understand, he says.

“My parents know I do not follow any religion. But at the same, I am not against any religion. I do follow certain traditions if there is a scientific explanation. I told my parents why I didn’t want conventional rituals and they understood eventually,” he says.

With different cultures and backgrounds, how does one conduct a ceremony that everyone enjoys?

“In self-respecting weddings, you are free to decide how you want the wedding to go. Our officiant could speak Hindi and Tamil, so that every guest would understand,” says Yatharth.

While there were no religious symbols like aarti, idols or kumkum included, they did light diyas as a symbol for their bright and prosperous future.

Is the wedding as fun and joyous as a conventional one? The first thing that both of them did was make sure their immediate families were on board. They mentally eliminated those who were ‘not important’ to ensure that no one asked, ‘log kya kahenge?’.

The wedding ceremony had around 50 guests and lasted for an hour, with two extra days dedicated to haldi and mehandi. It was conducted in a beach resort in Auroville.

“My family is used to four-day weddings, so we decided to keep mehandi and sangeet as they are not part of any religious ceremony. Mehendi is applied to ensure that the bride and groom cannot work and are well rested before the big day. Meanwhile, the haldi ceremony is for a facial glow. And the sangeet is kept so that families can mingle, and it’s a great ice breaker. Every event has a logical explanation,” says Yatharth. On the first day, Yatharth’s sisters applied mehendi on Nivetha’s hand and in the evening, escorted Nivetha to the stage for the sangeet, thus shattering the notion that only brothers can escort the bride as a way to protect her. The sangeet had games that allowed everyone to mingle.

The second day had the haldi and engagement. Instead of Nivetha and Yatharth exchanging rings, their parents exchanged clothes as gifts. Even the reception had instrumental music to avoid language barriers.

The D-day began with the sunrise and the couple took vows by addressing five elements — air, water, fire, wind, and sun.

“Our officiant introduced himself and invited our parents to say a few words about us. He made us worship our parents, something we both wanted. We offered flowers to our parents and got blessings in return. We lit a kuthuvilakku (lamp). I took both our vows in Tamil, and he did the same in Hindi. Our marriage was concluded by exchanging rings and garlands. Our guests showered us with petals and then headed for breakfast,” explains Nivetha, who wore her mother’s 35-year-old wedding trousseau. The ceremony was in harmony with nature as well. Niveth and Yatharth steered clear of single-use plastics and instead gave guests refrigerated PET bottles. All the gifts were either wrapped in cloth or paper, and decorations included only natural flowers. The venue provided food in biodegradable cutlery.

They expected hiccups, but the feedback from the guests was overwhelmingly positive, they say.

“We would like to urge the young generation to know and understand that they can stay away from the status quo while still respecting traditions. Many people want to opt out of the traditions and break stereotypes, but are unaware of the alternatives. By sharing our story, we want people to know there are several ways, of which this is one,” says Nivetha.