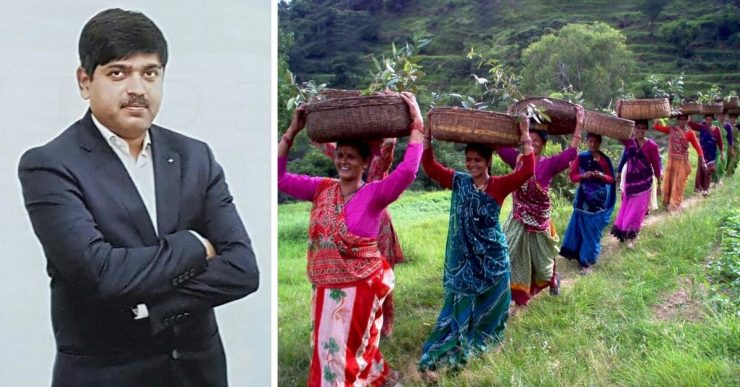 Dr R Meenakshi Sundaram is an Indian Administrative Service (IAS) officer who holds several portfolios in Uttarakhand and he says, “It is my dream to transform the economy of the state.”

It is perhaps prudent to applaud the relentless efforts of Dr Sundaram in ensuring that forced migration from the hills is curtailed. Projects worth more than Rs 3,632 crore have strengthened the rural economy by giving a boost to the cooperative, farm and allied sectors.

Speaking to The Better India, Dr Sundaram says, “I come from a village called Thiruppathisaram in Kanyakumari district, Tamil Nadu. I pursued a degree in veterinary sciences and then went on to complete my Master’s in animal genetics and breeding from Tamil Nadu University. In 2001, I joined the civil service and was allotted to the Uttarakhand cadre.”

Being part of the administrative service allows one to reach many more people and serve the nation well, he says. Having worked on implementing several schemes in the state, he narrates the impact of a few.

Dr Sundaram says, “The apples produced in Uttarakhand are now regarded as among the best in the market. With apple cultivation in the state covering 25,785 hectares and an annual production of over 62,000 metric tonnes, the major apple crop comes from Uttarkashi and Dehradun districts. More than 60 per cent of the fruit in Uttarakhand is produced in these areas.”

Now that apple cultivation has been established, Dr Sundaram says that the government wants to double the area under apple cultivation and is also moving the state’s 4.5 lakh farmers towards crop diversification to increase their income.

Mushroom cultivation, trout farming, aromatic plants, medicinal herbs, off-season vegetables, pulses, spices – all these are areas of focus for the state, he says.

In the last three years, the total organic farming area in Uttarakhand, he claims, has witnessed a 23 per cent rise. “Out of the total agriculture area, 8 per cent of land was being used for organic farming in 2017 and this figure went up to 21 per cent in 2020.”

Dr Sundaram says, “We have promoted organic farming through dedicated schemes of the Government of India, namely the Paramparagat Krishi Vikas Yojana (PKVY). The scheme provides end-to-end support to organic farmers. Farmers are provided handholding for all stages of production including certification and marketing. Farmers are also supported for post-harvest management including processing and packing.”

“In this way, highly comprehensive support has been provided to organic farmers.”

Speaking about the Uttarakhand’s Mukhyamantri Ghasyari Kalyan Yojna (MGKY), Dr Sundaram says, “I am particularly excited about the impact this scheme has had. The purpose of the initiative is to empower the rural women of the state by reducing their burden of fodder collection and venturing into other income opportunities.”

The scheme is tailored to address a particular issue that is widely prevalent in Uttarakhand. With a livestock population currently at 47.94 lakhs, more than 70 per cent of the state’s population earns its livelihood from farming and livestock. Adding to this, Dr Sundaram says, “Up in the hills, it is usually the women who undertake the work of animal husbandry. Close to 88 per cent of the farming population believes that it is their [women] burden to bear. This is not just physically taxing on the women but also an exhausting process.”

Anita Devi, from Mansuna in Uttarakhand who is one of the beneficiaries of the program, says, “Being a part of the scheme has resulted in our cattle getting better nutrition and that in turn means an increase in the milk output. Additionally, more milk to sell has resulted in better income for us. I have been speaking about the benefits and have also got many others into this scheme.”

Dr Sundaram also points to a study conducted in Almora according to which women engaged in collecting fodder often experienced extreme pain in their shoulders, upper back, lower back and knees.

The women involved in this job would travel up to 8-10 hours on foot in search of fuel and fodder.

Anita says, “Up until now, we had to undergo a lot of stress to go and collect fodder. Many times we have also been injured in the process. This has significantly reduced the dangers that came with having to go and collect the fodder.”

The MGKY policy implemented by Dr Sundaram reduces the need to collect fodder under difficult circumstances. An increase in the availability of fodder by using scientific resources and tools to preserve crop remains and forage has helped reduce environmental pollution caused by burning forage and increased the income of farmers by devising ways to improve their health and milk-producing abilities of cattle within the state.