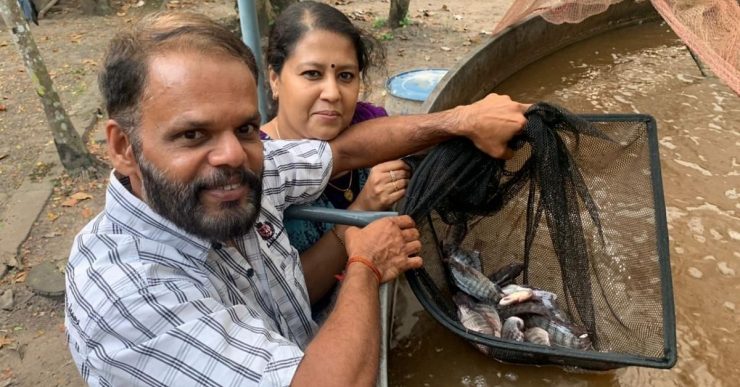 Ernakulam native couple Ramitha Dinu and Dinu Thankan started fish farming, not as an additional source of income but to withstand the financial imbalance that happened due to the pandemic. Even though Dinu ran a small business and Ramitha worked as a part-time French tutor, they found it difficult to gain a stable income.

During the lockdown in 2020, they were introduced to Biofloc technology in fish farming through a family friend, The former deputy director of the Central Fisheries Research centre, Shaji knew all about this method. Under his expert guidance, the couple built a tank in their backyard and put in 1,500 Tilapia fish babies.

“Within six months, each fish grew to an average size of 350-400 gm. The first yield was sold within the blink of an eye and we were able to sell them for Rs 300 per kg,” says Ramitha.

People in the neighbourhood WhatsApp group were their first customers. They even delivered clean fish to their doorstep at an additional charge of Rs 50. It’s almost time for the second harvest and both of them are busy with its preparation.

The couple spent around Rs 1.6 lakh to set up the tank and purchase fish and other requirements. They received a subsidy followed by a licence for farming. Fish babies were supplied by the fisheries department and carefully moved to the tank built according to the instruction.

Up to 2,000 fish babies can be added to an 8-metre in diameter tank, which is 1.5 feet high. The whole process regarding this farming is to be done carefully because it employs an artificial setup. Constant checking of pH and ammonia levels is vital for a healthy yield.

“Biofloc technology may sound complicated but it is rather simple. If performed with interest and care, profit is certain,” opines Dinu. “Crystal raw salt is mixed in the tested water before adding the babies. We need to ensure a 24/7 electricity supply to provide artificial oxygen. Thus, an inverter with an extra battery is a must. The pH value and ammonia of the water should be checked daily and if there is any variation, there are simple ways to make it normal like mixing jaggery.” The farmer explains that Tilapia fish has high immunity and survives even in dirty water but its taste would differ. “The warmest feedback I received till date is from old people who say the fish tastes like the ones from their childhood, unadulterated and delicious,” he says.

Dinu feeds the fish twice a day. “The food is organic and rich with protein and fibre,” he says, adding, “I feed the fish at 8 am and 5 pm every day and it is delightful to watch them. They eat a lot within seconds. Friends or neighbours usually show up to catch a glimpse of this routine.”

Ramitha gives all the credit to her husband for the success of their fish farm. “He is the one who spends time looking after them. I often feel surprised at how he spots the minute changes in the babies and immediately takes measures to tackle them,” says the French teacher.

Dinu adds that his expertise was formed as a result of attending multiple classes by the fisheries department. “I owe Shaji chettan (elder brother) a lot for his constant support and advice,” the 49-year-old says.

The couple earned a profit of Rs 1 lakh by selling more than 600 kg of fish in the first harvest itself and are now setting up a new tank near the existing one to expand their farming practice.