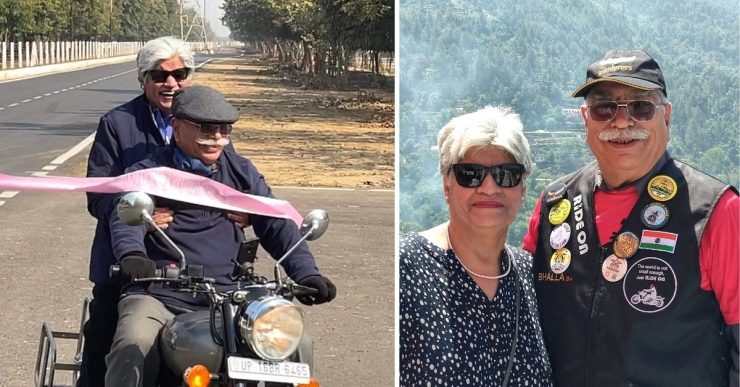 Yogeshwar and Sushma Bhalla, affectionately known as Yogi and Sushi, have been married for over 40 years. A common thread that binds the couple together, even today, is their shared love for travelling, and willingness to set out on the next big adventure.

And a trusted companion in all these ventures is their beloved bullet.

“I’ve always enjoyed travelling on my bullet. When I met Sushma and we got married, the joy only doubled,” Yogesh, 73, tells The Better India.

“On 3 October 1976, we got married. On 5 October, we were off to Srinagar for our honeymoon on the bike,” he recalls.

Sushi chimes in, “That has to be one of the most memorable trips that we have been on.”

While couples can take time to get to know each other in arranged marriage setups, travel was the perfect icebreaker for the Bhallas. “We discovered so many things about each other in that very first ride together,” says Sushi.

“Since 1976, Mrs Bhalla has been my navigator and motivator, which is why I refer to her as my Janeman-Gul-e-Gulzar (flower garden),” adds Yogi with a hearty laugh.

A Wanderer Meets a Studious Girl

Speaking about their early years, Yogi says, “I was a wanderer, while Mrs Bhalla was a very studious girl. Ours was an arranged marriage. When my family and I went to see her, what I immediately liked was how beautifully she sang.” Sushi sang a song from the movie Abhimaan (1973) titled Ab To Hai Tumse Har Khushi Apni (Now every happiness of mine is with you).

“The way she sang stole my heart,” he says. And 46 years later, their love is still strong.

As a newly married couple, they would often get asked why they are travelling so much. To this, Yogi says, “People never understood why Mrs Bhalla had to accompany me on my trips. Even my mother would often jibe about it. But we did all we had to for the family and also found ways to enjoy our life.”

To ensure that they spent minimum time on pit-stops along the way, Yogi says, “We would carry two saddlebags with us – one with clothes and essentials, and one with food. This ensured that we made very few pit stops along the way. This also helped us spend a lot of time on the bullet, cruising along and covering long distances.”

Yogi’s interest in the bullet began when he was only 15, after watching his elder brother ride a bullet.

“As soon as I got my first salary, I spent Rs 6,300 on buying my first bullet, without informing anyone at home. Having the bike pushed me to explore further.”

Even after the birth of their children, the Bhallas did not curtail their travelling. “We would take the kids along. Our son would sit in front of Yogi and our daughter would be nestled on my lap behind,” says Sushi.

So far, this adventurous couple has visited over 22 countries, and say that they cannot pinpoint any one incident that was unsavoury. “We have enjoyed every moment spent on the road. These travels have given us memories to last our entire lifetime,” says Yogi.

The couple thrives on spontaneity, and any time they would get a few days off, they’d jet off to the hills.

In 2011, at 58, Yogi and Sushi opted for early retirement. “Soon after my retirement, we rode through Bhutan, Nepal, Leh and Ladakh. That trip did wonders for our dwindling confidence. It pushed us to explore more. Our next trip was to Europe. We did not leave any stone unturned in making sure we enjoyed every bit of our travel. From recreating iconic Bollywood film poses in the Swiss Alps to enjoying candle light dinners, we did it all,” says Yogi.

Travel Memories to Last a Lifetime

When asked about all the places they have visited, Yogi asks for a moment to go get his notes, which list down all the countries they have travelled to. “Belgium, Bhutan, Dubai, France, Qatar, Rome, Singapore, England, Scotland, Turkey and Venice. It was Sushi’s dream to visit Venice,” he says, recalling how they spent an entire evening on the gondola. “We walked the streets of Venice hand-in-hand singing Do Lafzon Ki Hai Dil Ki Kahani, a song immortalised by Amitabh Bachchan and Zeenat Aman.”

For this couple, the real fun in travel is to enjoy every experience it throws up. “I enjoy driving, be it the bullet or car. I have never hired the services of a driver. Exploring a place can only happen when you travel via road. We have also enjoyed the hospitality of so many strangers — from eating in their homes to sharing chai (tea),” says Yogi.

Speaking about some of the challenges, he notes, “When we travel overseas, language tends to be a barrier. Even the various signage on the road is in the local language. It was difficult in the beginning, but we learnt to read the images and would ride on. We also tried to pick up a few words in the local language.” While travelling was undoubtedly easier when the Bhallas were younger, they say the adrenaline rush is enough to push them to travel even now.

In March 2021, Yogi had to undergo a knee replacement surgery. He was also advised to rest and his doctor urged him to stop travelling, especially by bike. “My right knee was replaced, and I was in physiotherapy for three months. I was thereafter advised to use a walking stick, which I refused. That would immediately make me old,” he says. With tremendous will power, Yogi ensured that he was physically fit before he rode his bullet again.

The couple loves travelling so much that even after the pandemic began, they would get out every few days on their bike. “We ensured that we did not meet anyone. We would travel for about 25 to 30 km on our own and return home happy. We would mask up and have our helmet on during every ride,” Yogi says.

From paragliding in their 60s to trekking the Himalayas in their 70s, this couple is unstoppable. “Hum rukhne wale nahi hai (We are not going to stop),” says Sushi.

With a great sense of joie de verve, the Bhallas are raring to go on many more rides together.