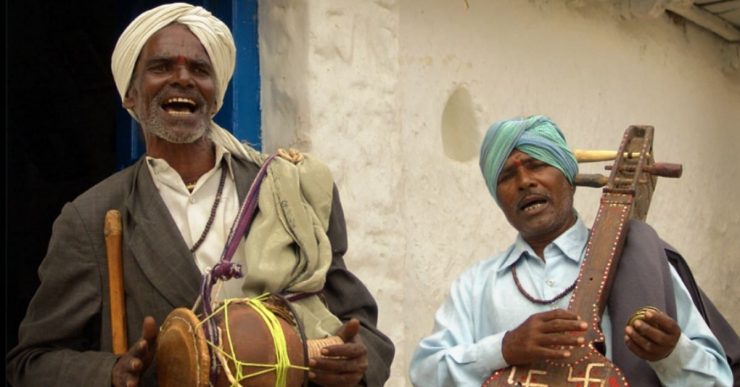 As the Telangana Rebellion began taking shape in the ’40s, members of the movement deployed rural folk art as their weapon of dissent. In Andhra Pradesh, burrakatha became such a strong tool against feudal landlords and an unjust government that it was banned by two spheres — the British government in Madras, and the Nizam’s government in the princely state of Hyderabad.

The Paperclip wrote that the rural community of oral storytellers, “was banned by both…because they posed a significant threat to imperialism and feudalism”. Burrakatha reached regions in India that governments could not, mobilising and uniting rural Andhra Pradesh against caste and class oppression.

Burrakatha evolved from another art form called jangam katha, which was “thought to have been derived from bands of roving minstrels (jangam) who sang the praise of Lord Shiva as they travelled rural areas in ancient times,” wrote the Cambridge Guide to Theatre (1995). “When listeners’ social and religious affiliations shifted, the minstrels responded by absorbing secular materials into their shows.”

Burra refers to the tambura, a stringed instrument worn across the right shoulder of the performer. Meanwhile, katha means story. The main performer, kathakudu, play the tambura and dances rhythmically, as he narrates his story. He also wears a hollow ring with metal balls inside on his thumb and holds another one in his hands. These ring to the beat of the basic tempo of the song. The drummer, called the rajkiya, stands alongside, commenting on contemporary political and social issues, even if the story concerns historical or mythological events.

In the 40s, the Indian People’s Theatre Association, then closely associated with the Communist Party of India, used burrakatha to convey its political and social message. In Andhra Pradesh, the Praja Natya Mandali (formed to revolt against the Nizams during the rebellion) also used the art form to reach a vast number of voters.

During the Telangana Rebellion, burrakatha became a loud voice that punctured the silence and suffering that rural communities had been enduring for years. They sang songs to celebrate and praise how farmers toiled for decades to cultivate their lands and were beaten down by landlords who asked for taxes even during the time of famines.

Kashtajeevi, the first burrakatha, to be performed in Telangana, narrated the tale of how farmers were forced to roam about with rocks tied to their backs when they told the dora (landlord) that they couldn’t pay tax because they had no produce that year. In 1954, the film Aggi Ramudu also narrated the story of Alluri Sitarama Raju, the leader of the Rampa Rebellion in 1922.

Like this, many examples exist of how the art form was used to express the lives of oppressed castes and classes. Sheikh Nazer referred to as the ‘father of modern burrakatha’, used the art to mobilise masses during the Telangana Armed Struggle and India’s freedom movement. For him, it was more important to highlight the caste struggle without involving mediums of violence.

As the nation gained independence, burrakatha, too, began evolving. Towards the 70s, it began its descent to obscurity, and the advent of televisions put the art at grave risk. In modern times, it has been used by various governments to spread awareness about electrification, toilets, social issues like child marriage, etc, but its cultural and historical significance remains virtually untold. The inception of the internet, which brought ease of accessibility to movies and plays, has only pushed burrakatha further into obscurity. Those who practice the art today barely earn enough to feed their families, and for most, it is no longer the primary source of livelihood.

Found this from the Akashvani catalogueue, in 1967 Burrakatha was performed on air to tell the story of Netaji’s life. They were quite a frequent performers back then. pic.twitter.com/atQNDhpPHW

The Paperclip’s full Twitter thread can be found here.