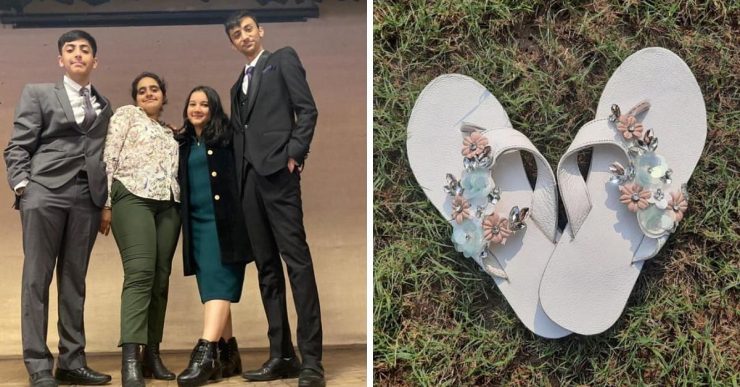 Given their passion for business, it was only a matter of time before the New Delhi-based, 17-year-olds Divya Sijwali and Parth Puri launched their own business. They founded Tyron in April 2021, where they sell footwear made of a unique material — tyres.

“I remember complaining to Parth over the phone one day that while there are many shoe and slipper options for special occasions, there’s not much that’s ideal for home wear,” recalls Sijwali, in an interview with The Better India. So they decided to launch comfortable footwear that would be ideal for everyday use.

They struck upon tyres as their base material not just because it would help cut down drastically on cost, but also because it meant they were doing something for society.

Throughout their business, they have successfully recycled 80 tyres by selling 165 pairs of footwear.

Upcycling: with aesthetics and sustainability aplenty

The process starts with them visiting dump yards, particularly one in Ghaziabad, where tyres are available at a minimal cost. They then get the tyres cut, remove wires and spikes, and extract the specific parts that are useful to them.

From here, they visit their channel of cobblers, showing them potential designs for the footwear. The cobblers offer inputs and build on their ideas until they have a final design, and then get to work. “At Tyron, cobblers are given a monthly base salary of Rs 1,000. And depending on the orders they complete, they’re given a share of the money we make,” explains Sijwali.

This is especially important since when they started during the lockdown, several cobblers had lost their livelihood and were moving back to their villages. Puri says, “All the five cobblers we collaborated with in the first two months of our inception had left this profession for underpaid labour jobs. But we give them incentives to stick with Tyron.”

Besides being cheap material, their use of tyres also signals sustainability. They found that an excess of tyres in these dump yards meant they were being burnt, releasing harmful, toxic gasses into the atmosphere. “When such waste is disposed of into the ocean, it also becomes a major source of microplastics, which then harms marine biodiversity,” says Puri. By reducing this type of waste and upcycling tyres, they’re encouraging a fresh outlook toward approaching waste.

Thus far, the business launched by the two longtime friends is completely bootstrapped. The bulk of their funds has come from entering various competitions. “Parth and I keep looking for opportunities, we applied almost everywhere,” says Sijwali.

Nevertheless, the duo have had two notable successes. The first was entering season three of India’s Future Tycoons, organised by ENpower. Here they learnt the ropes of how a business works, received much guidance about starting and running a startup and won a Rs 15,000 cash prize.

More recently, in April, they registered for the World Youth Entrepreneurship Challenge, representing India on a global stage. “While we were competing, there were some great ideas. People were making lithium batteries and had complicated scientific innovations. And we were scared, just sitting there with two pairs of slippers,” says Sijwali. But the duo walked away with a $5,000 prize, which has acted as fuel for their budding business.

Although it was a challenging undertaking, registering for the competition has taught them the importance of trying and putting themselves out there. “It taught us that the biggest risk in life is not taking a risk,” says Sijwali.

Balancing academics with a business

While Sijwali is the Chief Operating Officer and Chief Legal Officer, Puri works as Chief Marketing Officer and Chief Technology Officer. They’ve also onboarded two more members to join the team, who are also classmates, including Bavleen Kaur who is the Chief Financial Officer and HOD Human Resources, and Gurmaan Singh Sandhu, who works as Chief Product Officer. The four hold equal equity and the company remains entirely bootstrapped.

“The best part about Tyron is that we all have our own domains. None of us tries to interfere and intervene in the other’s work because we have that degree of trust that the other person is capable of doing their job the best. And we always have room for open discussions and feedback,” explains Sijwali about their work dynamics and company culture.

While working smoothly together, they’ve also had to face their fair share of challenges. Among them are the pandemic-induced lockdown, which halted their work, since much of it happens on-ground. Sometimes, given the fact that they’re school students, they’re not taken seriously, which becomes another hurdle when running a business.

The biggest challenge they’re facing though is that of time management. They spend roughly three hours each day on their business and set weekly targets for themselves. “How to balance academics, extracurricular activities, and running a business? That’s a mammoth task for us but we’ve been trying to work on it,” says Sijwali.

Selling their footwear from anywhere between Rs 600 to Rs 1,200, starting in March this year, Tyron has become profitable, with the money going partly to the cobblers, partly back into the business, and partly as profit.

The website currently has eight designs and going forward, they’re interested in expanding. “We get a lot of messages from people saying that we need to have some groovy styles and that we should introduce male fashion too,” says Puri.

For now, they sell through their website, shipping all over India but also internationally to the USA and South Africa in the case of bulk orders. But they’re also looking at selling through e-commerce giants, Amazon and Myntra.

Besides expanding on design, the young entrepreneurs also have a goal of moving beyond tyres and exploring new materials so they can grow their product line to include wallets and other lifestyle items.