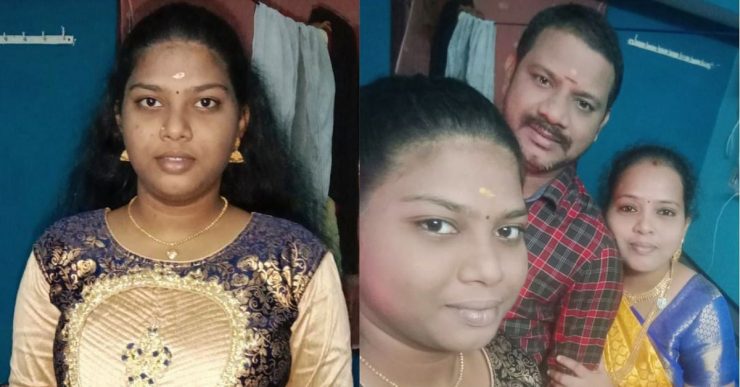 As her father battled for his life in the hospital, 17-year-old D Ramya studied with a steadfast focus and singular aim in mind. She wanted to give her best in the Class 12 board exams and make her father proud.

The student of Government Girls Higher Secondary School in Perambur, Chennai, managed this feat with no extra classes and while dealing with a personal crisis.

Two days before the Class 12 board exams, Ramya’s father, N Dayalan, suffered a heart attack. He was rushed to the hospital by her mother, D Viji, and remained in the hospital for almost the entire duration of the exams. Dayalan, who worked as an auto driver, has had to reduce his trips after the illness.

An only child, with no immediate support from family, Ramya had to prepare for the exams sitting alone at home. She had no one to take her to the examination centre also.

“Ramya has always been very studious. She would start studying at 3 am and finish only by 11 pm. We did not have the money to send her to classes. She would look at some YouTube channels, read the books, and ask her schoolteachers her doubts. As we are not educated, we want our child to study well,” says Viji.

For Ramya, the joy on her parents’ faces looking at her results made all the difficulties worth it.

“I made myself mentally strong and studied during those two weeks that my father was in the hospital. He toils only for my future. I didn’t want to get emotional, worry, and ruin my results. The hard work of so many months would be useless if I didn’t study before the exams. Therefore, I studied with a single aim of scoring well, and it’s been worth it,” says Ramya.

On Monday, the scene at Ramya’s house was nothing short of a movie. Waiting for the results, Viji dozed off. As the results came on screen, an elated Ramya woke her mother and asked her to see the number. Seeing 572/600, Viji did not have the words to express her happiness.

“I knew that my daughter had studied hard, but never thought that she would score so well, given the circumstances. She has proved what a brave girl she is. We immediately called her father, who was out for work and asked him to come home. I didn’t want to tell him over the phone as he is not supposed to get excited,” says Viji.

Dayalan says that he forgot his illness and worries when he saw his daughter’s results.

“I am happy that my daughter has scored so well. This is the best gift that a father can get. I have forgotten my illness, and my focus is now on getting her into a good college,” says Dayalan.

As Dayalan and Viji married each other against their families’ wishes, they have had no support from them even after all these years. He says that after the birth of Ramya, she became their life, and his purpose to live. A few months before the heart attack, due to increasing expenses, they moved to a smaller house in another locality to save rent.

“While we don’t have support from family, we have earned a lot of friends. My husband has toiled day and night to provide a good education to our daughter. He would work without rest. Till Class 5, we were able to pay for a private school. After that, it wasn’t possible and we shifted her to a government school,” says Viji.

Ramya now wants to pursue BCom and Chartered Accountancy post that. She hopes that she gets into a college that offers a scholarship, to lessen the financial load on her father.