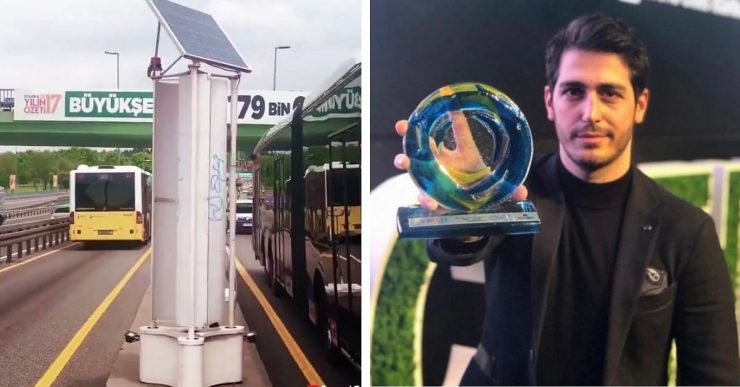 While crossing a busy road have you ever stood at the divider in-between feeling like you might get blown away because of the wind generated by the traffic whizzing past you?

Imagine if there was a way to convert that wind energy into electricity – given the volume of traffic on Indian roads, this might be a rather lucrative proposition.

In 2021, Istanbul Technical University designed and installed wind turbines in the streets of Istanbul to generate electricity using the wind generated by the traffic. The vertical turbines that have been installed along the roads are known as ENLIL and the University has developed this with Devecitech, a tech firm in Istanbul.

It was entrepreneur Kerem Deveci who came up with the idea of building an ENLIL. Kerem noticed during a journey on Istanbul’s Metrobus network that the vehicle he was travelling on was susceptible to wind influences — the covers of each emergency evacuation value wouldn’t stop flapping because of it.

He subsequently worked on this idea and the prototype of the turbine was made in Kerem’s bedroom.

According to Euronews.green, wind energy consumption hit record highs in Turkey last year and there is a burgeoning appetite for clean innovation. As of 2020, over 8 per cent of the country’s entire energy network is produced by wind power.

Though ENLIL may still be in its nascent stages, the project was given the ‘ClimateLaunchpad Urban Transitions Award’, and won the Mercedes-Benz Turkish StartUP Competition before it had even exited its research and development phase.

A successful rollout of the device across the Turkish capital could see other cities across Europe adopt similar initiatives.

· These wind turbines have been built with sensors to keep a record of the atmospheric variables like temperature and humidity.
· They can also detect earthquake activity and carbon footprint.
· While these turbines are not very massive their blades are powerful enough to produce one kilowatt of energy an hour.
· Each ENLIL is fitted with a solar panel, which in turn can produce electricity that can power up to two households for a day.
· It will also measure the city’s temperature, humidity, wind and CO2 by using the built-in sensors and the IoT platform.

Developed by Istanbul Technical University. Ingenious. Uses the wind generated by passing traffic. Given India’s traffic, we could become a global force in wind energy! 😊 Can we explore using them on our highways @nitin_gadkari ji? https://t.co/eEKOhvRpDo