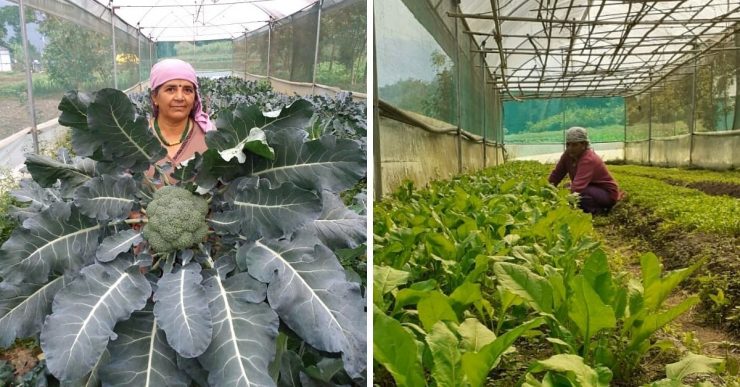 In 2010, the Sikkim government took an ambitious decision to make its agricultural land organic in order to restore the damage inflicted by chemicals fertilised on its fragile ecosystem. After unsuccessful attempts to seed the concept and reap expected outputs, the government established Sikkim Organic Mission to monitor the transformation and implement effective measures at multiple levels.

As a part of the move, in 2014, Krishi Vigyan Kendra and other Agriculture Department officials reached one such Gangtok-based farmer, Dilli Maya Bhattarai, to help her shift from traditional farming to organic.

Little did she know that the move would change her life forever.

Today, organic farming has helped turn her life around by increasing her income threefold.

A change of a lifetime

“I have always practised farming on our ancestral land, where I used to grow vegetables like green peas, radish, tomato, and others using traditional methods with chemical fertilisers and pesticides,” Dilli tells The Better India.

The 63-year-old says that traditional practises implied that her produce was similar in quality as compared with competitors. “Large farmers growing vegetables in bulk quantities could afford to sell their produce at competitive rates. But I had only 4 acres of land and could not afford to cut down on profits. It resulted in less income and financial losses due to wastage,” she says.

When the project began, officials of the Agriculture Department approached her. “I visited Pune, Bengaluru, Delhi, Kolkata, Uttarakhand and even Nepal to learn organic farming practises. The officials also provided me with a tractor and other farm equipment. Upon returning, I started growing tomatoes and broccoli in a poly house, in addition to the seasonal vegetables I was already growing. These plants could not be grown earlier in the open air as frequent hail storms would affect the yield and often resulted in crop loss,” she says.

She adds that poly houses offer a safe and protected environment to grow crops. “I emphasised on growing more broccoli as it had high demand in the market. Once I learned how to grow it through the training, I built on the skills and mastered how to market my produce. I fetch a premium price of Rs 200 a kilo,” Dilli says. The farmer expanded on growing other varieties like bitter gourd, mustard, spinach, coriander and corn. “My organic farm produce became superior to other vegetables that were being grown by chemical methods in the market. I started receiving more demand and earned more profits. Moreover, the produce that went unsold was purchased by the government at a profit,” she says.

She says she prepares her compost and manure using organic matter and cow dung. “I have also formed a self-help group of 20 women who are learning and practising organic farming,” she says.

“Adopting progressive farming methods has helped me clear debts, fund my sons’ education, and build a better house. I have been able to multiply my income and improve my lifestyle with this profession. I would continue the practice until I am physically fit,” she says.