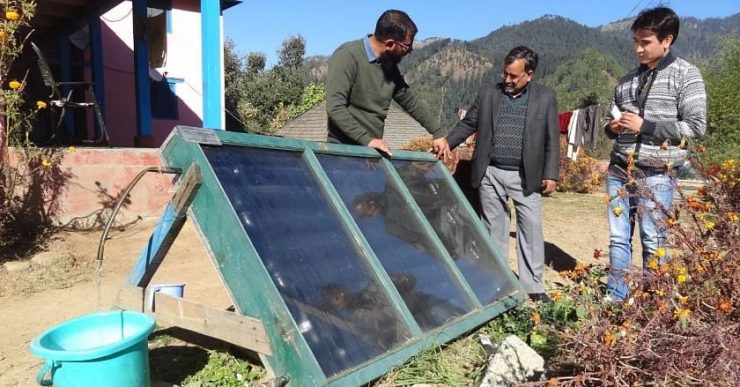 In cities, access to boiling water to meet daily requirements is just a switch away. But when you live 2,000 metres above sea level, the situation is entirely different.

In the Himalayan region, residents need warm water through the day to bring down temperatures to even bearable levels. As Dhaneshwari Devi, a resident of Maigal village, explains, “At any given time, the water temperature is between 7 and 12 degrees Celsius. We need warm water not just for chores and bathing, but also to feed the cows, cook, and even to drink through the day.”

In the remotest parts of the area, little to no electricity is available to heat the water. With this, villagers are left to fend for themselves, and resort to chopping down forest trees and using them as fuelwood.

The practice raises environmental concerns and exposes residents to harmful gases throughout the day, affecting their physical health.

For this, scientist Dr Lal Singh has developed the Solar Hamam, which has brought much needed respite to the residents of Maigal. The villagers have been able to freely access warm water, reducing their fuel requirements by 40%.

The device is a wooden frame that houses an absorber sheet made from galvanised iron insulated with styrofoam in the rear. A customised aluminium alloy water coil with 18 litres capacity is fixed on the sun-facing side. The absorber sheet and water coil are coated with market available black paint. The paint, blended with a unique material before application, enhances the ability to absorb solar energy.

A 3.5 mm window glass fits on the sun-facing side. Operating the device requires water to be poured from the top left end of the pipe. And about 15 minutes later, warm water of about 80 degrees Celsius is released from the bottom right-hand side of the exit. The water heats while passing through the alloy pipe heated by the sun.

Face to face with an uphill battle

Before the innovation, Dr Lal spent years researching and analysing issues in rural areas, and conceiving a grassroots innovation.

The botanist and founder director of the Himalayan Research Group (HRG), Shimla, says that at first, his quest to help residents of Maigal did not arise from the need for warm water.

“We [members of HRG] were a bunch of researchers who completed our academics in 1992. We wanted to implement scientific knowledge from research in rural and geographically difficult areas of the Himalayas,” he tells The Better India.

Here, he conducted workshops on livelihood generation and women empowerment, roping in scientists, environmentalists, and experts in respective fields.

But he noticed how the meetings would always end on a filthy note. “The experts spoke for hours on environment conservation and empowering rural India, but left the venue littered with food leftovers and rubbish,” he recalls.

Dr Lal realised that workshops alone were not sustainable, and started reaching out to villagers to understand their needs.

In 1997, he formed his NGO and approached women in remote parts of Himachal Pradesh. “Interactions with them helped us realise they wanted cash in hand. After three years of findings and identifying solutions, HRG’s team of scientists planned to set up mushroom compost units in 2000. The project was small and supported by KVIB and SEED-DST,” he says.

However, during the training sessions organised on growing mushrooms, women would often turn up late, or fail to show up entirely. “It became a frequent scenario across villages. They said they were collecting firewood from the forest or seeking fodder for cattle. The case was particularly concerning for villages located 2,000 metres above in the mountains,” he says.

He dug deeper into the issue to learn that these villagers were heavily dependent on forest resources. “They required forest for housing, farming, fuel, manure, grazing, and more. But there was only so much wood that they could need for cooking. Their heavy requirements were not adding up,” he recalls.

Dr Lal then initiated a study revealing that every household in the mountain areas used fuelwood to warm the water and for space heating in their homes. “The fire at the chulha, a traditional stove, was always burning with a water heating pot that kept warm water. The women would remove the pot and replace it with other utensils while cooking. Then, the pot would go back on after the meal was complete. The family members would use the warm water from the pot for drinking, washing hands, and making tea,” he adds.

The research revealed that over 60 per cent of the fuelwood was used to warm water and space heating, while about 30-40 per cent went for cooking. “The village residents did not use LPG apart from warming food or preparing tea. They entirely depended on the fireplace,” he says.

Moreover, though the villagers could afford solar water heating systems, they could not use them. “The water in the pipes would freeze and burst the channels. New parts of the branded solar heating system would require almost a month, and there were additional expenses to maintain and repair,” he adds.

Dr Lal says that further interactions revealed that hot water was a priority for these people, and the fireplace was the most reliable source.

In 2005, the HRG team introduced the Solar Hamam to villagers. This warmed water within minutes, and worked through the day. “It has undergone a couple of iterations over the years to improve efficiency, enabling it to work even at -20 degrees Celsius. The first batch takes about 45 minutes to heat as the pipes absorb sun rays, but the consecutive batches release in 15-20 minutes. The villagers have to ensure that no water remains in the pipes by the end of the day to prevent freezing and bursting of pipes,” he says, adding that a provision for night drainage is embedded in this system.

There is no storage facility in the system, and it releases a bucket of water in each batch. “All the material used is food-grade, and the water warmed can be utilised for cooking, washing, bathing and other tasks alike,” Dr Lal adds.

Dhaneshwari says, “I have been using the water heater for the past five years and have never been so happy. I use the sun to warm water without needing electricity or wood burning. The water is used for cooking, washing clothes, and doing farm work, without inhaling toxic fumes from fuelwood and harming my lungs.”

Moreover, she does not need to make frequent trips to the forest to collect firewood, she adds.

Like Dhaneshwari, there are at least 1,200 families who are benefitting from the innovation.

Dr Lal says the water heaters are provided for free. “The villagers are requested to give the wooden frame for their contribution and have an accountability over it,” Lal says. “The water heaters cost around Rs 12,000, but the Central and state governments fund them under their various schemes.”

So far, about 6,000 people over 60 villages have benefitted from the Hamam, Dr Lal says. “Additionally, 30 trained artisans manufacture the solar water heaters. The move has helped generate employment for locals,” he adds.

He claims that the water heaters help save 40 per cent of fuelwood, which amounts to annual emissions of 2.5 metric tonnes of CO2. And reducing wood consumption is crucial to maintaining and conserving biodiversity elements in forests near the villages, he adds.

Dr Lal’s grassroots innovation earned him the HP State Innovation Award in 2016-17, and the Jamnalal Bajaj Award for Application of Science and Technology for Rural Development in 2021.

However, Dr Lal notes, “The state and Central governments promote the devices, but there is no subsidy offered to encourage the locals to buy. Such grassroots innovation should also get covered under government policies,” he says.