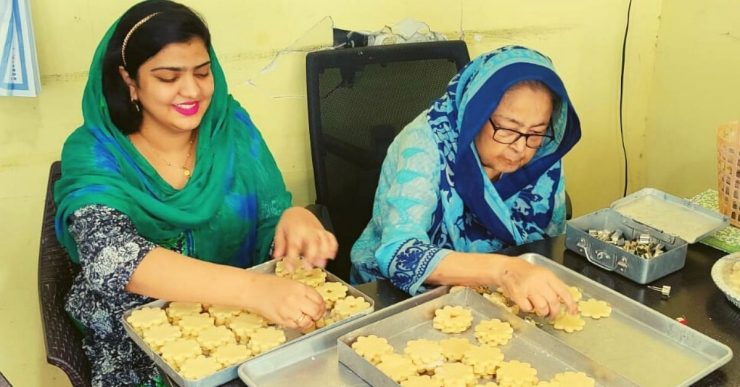 A paradise for food lovers, history geeks and street shopaholics, the Charminar city of Hyderabad has a special place for everyone. Being the soul of Hyderabad, Nawabi dawats (delicacies) like Biryani, Qubani ka Meetha and Kaddu ki Kheer are certain to tickle the taste buds of tourists and locals alike.

But among the popular dishes, there is a lesser-known sweet dish called ‘Badam ki Jali’ that often goes undetected by foodies. Primarily made with almonds, cashews and sugar, the recipe of this confection is known to have been passed on from one generation to another.

However, according to reports, there are only a handful of families left in the city that serve Badam ki Jali, which originated in the old Madras and Acrot areas of Tamil Nadu. It travelled to Hyderabad through inter-community marriages, where brides also had their closely guarded recipes in their elaborate wedding trousseau.

One of the few remaining families that make this dish in its authentic form is the Hussaini. As per the family’s accounts, Nafees Hussaini brought the recipe with her when her family moved to Hyderabad 60 years ago.

She would make the dish during family gatherings, festivals and weddings but she never considered selling them or making a business out of it.

Cut to 2021, the women of the house run a successful store, ‘Imperial Sweet House’, in the Sultanpur area near Noorkhan Bazar. With an average daily turnover of Rs 20,000, the family supplies their best seller Badam ki Jali and other sweets not just across India but the world.

The Hussaini matriarch turned into homepreneurs in the ’60s when their community and the society was reluctant to see women of the house earning money.

It was with the entry of Nafees’ daughter-in-law, Unnisa, that they decided to sell the sweets during festivals. They converted the ground floor of their house into a store to save money on rent. This also ensured they were able to manage both household work and sweet making.

Recalling the early days of their business, Unnisa says, “It is a Nawabi mithai that we made accessible to everyone. Initially, we started with a few orders of 1-2 kg and gradually increased to 10 [kg]. I still remember that cashews were priced at Rs 8 per kg and almonds were Rs 10 when we started. The help we hired 50 years ago is still with us. But nowadays there are grinders to grind almonds and cashews but back then it was a tedious process.”

Now 87, Unnisa credits her husband, Mansoor, who supported her dream to expand the store’s business.

“Whether it was completing an order of 52 trays of Badam ki Jali, delivering the sweets on his way back from work or working overnight while streaming movies on VCDs [to accompany the sweetmakers], he always helped,” she adds.

As part of their expansion plan, Unnisa introduced new colours, shapes and sizes like stars, betel leaves, flowers and fruits, to the recipe. She even added an ‘ashrafi’ design, which is achieved by pressing the dough between two Nizami coins to get their inscriptions.

Explaining the process of preparing Badam ki Jali without revealing much, she says, “We soak almonds in hot water and then dry it. Cashews and almonds are then ground into flour and then made into dough with sugar. The mould is then given different shapes and kept for baking. The whole process takes around 4-5 hours. The texture of the sweet is like cookies but the taste is similar to Kaju Katli.” Unnisa passed down the recipe to her daughter-in-law Nasreen who then taught her daughter-in-law, Aisha. Under the late Nasreen, the orders multiplied and she was the one to get new machines like grinders for easing the cooking process.

To ensure the quality of the ingredients, Nasreen and Unnisa would themselves visit the Begum market to taste cashews and almonds.

When Aisha, the fourth-generation entrant, took over six years ago, she expanded the deliveries outside the city and country. She used online platforms like Whatsapp and social media for marketing. She was also instrumental in customising trays to get special shapes.

“Currently, our selling capacity is 300-400 kg per month. We also make Puran Poli, Gajar Halwa and other sweets. Every dish is made fresh and if there is an exhibition in the city, we do not sell in bulk and make fresh sweets if they get over. Although the shelf-life of this sweet is four to five days if covered in butter paper and packed properly. In case a customer is unhappy with the quality, we replace the entire order. We care about our reputation and family legacy more than anything,” says Aisha, who is a software engineer.

Over the years many competitors have arrived who make the same dish but the Husaainis are not worried.

“We prefer forgoing profits over compromising on taste and consistency. My grandmother, Unnisa taught us this. It is due to these principles that we have a global footprint. Even actor Dia Mirza Rekhi had ordered our Badam ki Jali for her wedding last year,” says Ali, Aisha’s husband.

Both Aisha and Ali left their respective jobs in Dubai to continue the family’s legacy.

“The women of this house have a business acumen without having any business-related degrees. They hold magic in their hands to be able to make thousands of people smile with delight with their Badam ki Jali. So leaving a job abroad was totally worth it. We hope our next generation continues the family tradition,” he adds.