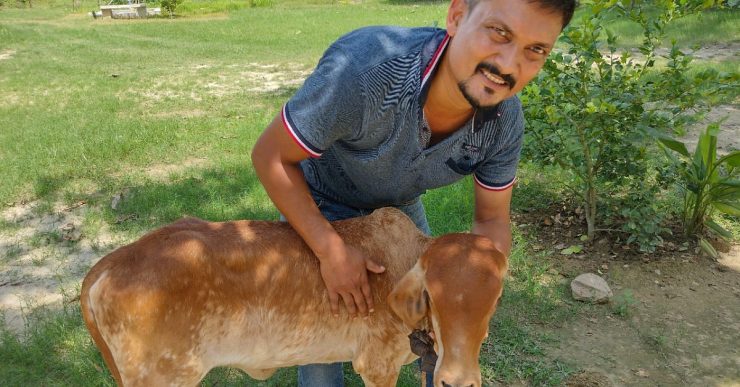 Utkrisht Pandey had a clear life path. After secondary school, he went to the University of Allahabad where he earned a postgraduate degree in Economics. From there he cleared the UPSC Central Armed Police Forces (CAPF) exam and started working as an assistant commander on the India-Nepal border, later shifting to crime control.

For five and a half years he served the country in this way, until one day he thought that while he was still young, he should do something else — something that helped people and improved their condition.

So in 2019, the 36-year-old took to farming. “I’ve been part of the disciplined uniform services which have taught me how to work hard and stay honest. So I came back to the village and started farming,” he tells The Better India in a phone interview. Returning to his village Bhadauna, in Pratapgarh, Uttar Pradesh, he started studying sustainable farming and soon struck upon agroforestry as the ideal model for him.

Today, on his farm called Marcelone Agrofarms – named after the French word for defence – one will find unique crops like white sandalwood, black turmeric, black salt (kalanamak) rice, and Kasturi rice, among others. “Since the word has spread, several people have come to see our model and learn from us.” It’s all organic, sustainable farming that uses natural manure. “We have certification about our farm being entirely organic,” says Utkrisht.

Besides his farm, he also has a nursery with about 50,000 saplings of white sandalwood. “We offer farmers free consultation about how to plant and care for it.”

He also has his own cowshed comprising two Sahiwal cows from whom he collects cow urine and cow dung, using the latter as manure. “For our nursery and farm, we also purchase cow dung from the villagers, so they can be assured that there’s someone on the local level they can sell to.”

He adds that he enjoys farming because it makes him happy and satisfied with the life he’s chosen. “I get to work closely with nature, which I enjoy. Also, when people come to learn about sandalwood farming and I have the opportunity to improve their lives on a personal level, I feel content.” Helping villagers, especially farmers, become self-reliant is a big part of his work, and one of the larger reasons for starting his farm.

‘I want to help and inspire.’

While many young people see government jobs as their ultimate goal, Utkrisht thinks it’s important to have a ‘Plan B’, too. He says, “You can live a good life by staying in your village and connecting with your land.”

Through his venture, he is also employing the villagers, especially the women, since the lockdowns had led to several migrant labourers losing their livelihoods. “I was thinking of ways to empower the lives of women at a local level,” he says, adding that he provides his workers with a ‘safe environment’ where they can also bring their kids to play in the area while the parents work.

Around 10 labourers work on his farm earning a daily minimum wage. Besides this, he also assists and consults with their kids, offering tips about education and providing career guidance. “It’s beautiful here,” says Sant Lal, one of the labourers on the farm. “It’s lush with greenery, just like they show in films,” he adds.

Besides setting an example, Utkrisht is also ready to offer advice and hopes that more people in neighbouring villages imitate his model. “My goal is to see reverse migration because people run toward cities. I’m not saying cities aren’t important. But villages are equally important. If we want development, then villages need to be self-sufficient,” he says.

And in terms of making farmers self-reliant and financially secure, Utkrisht is a huge proponent of white sandalwood.

It all started when he went to Bengaluru’s Institute of Wood Science and Technology (IWST), renowned for its research about sandalwood, and learnt that it can be grown anywhere as long as the soil’s pH is between 6 to 8.5. So he started growing sandalwood saplings on his farm.

“These are now around 10 to 15 feet long. I have roughly 400 plants,” he says. And since it’s “a root parasite plant” and can’t grow alone, needing other supporting plants, “it’s best for agroforestry,” he adds.

Noticing the scarcity of sandalwood, he points out that these are a great investment opportunity for farmers. “After 15 years, one sandalwood plant sells for over Rs 1 lakh,” he says, explaining why it should be planted by more farmers. “About 15 kg of hardwood is acquired from one plant, which also gives sandalwood oil. The hardwood costs Rs 10,000 per kg,” he explains, adding that he earns Rs 8 lakh annually from the farm, and when the sandalwood is ready, he expects about Rs 60 lakhs.

If more farmers adopt the practice of planting sandalwood, then, in the long run, Utkrisht envisions a sandalwood industry at the village level. This can include products that are made of sandalwood, like soap, agarbattis, paste, and more.

He adds that one doesn’t need a sprawling space to start a sandalwood farm. The area around one’s home is enough to plant at least eight to 10 sandalwood plants. “This can be a good additional income for a smallscale farmer.”