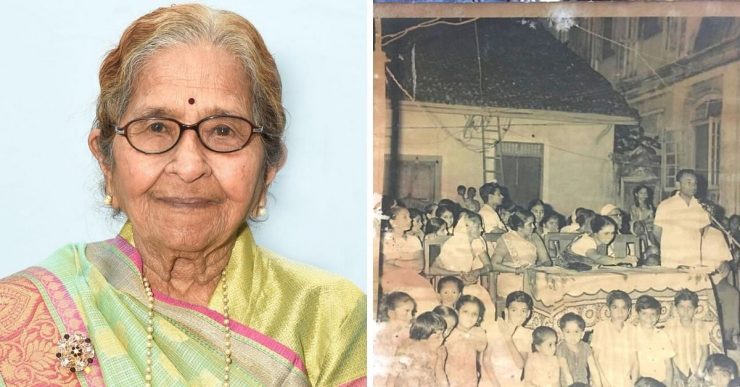 Prabhaben Shah from Daman was 12 when Mahatma Gandhi launched the Quit India Movement in 1942 at a Congress Session in Bombay (now Mumbai).

Being associated with Bardoli’s Swaraj Ashram from an early age, Prabhaben took a vow to contribute to the freedom struggle and slept on a jute sack for nearly six months. In a symbolic gesture to boycott foreign goods, she used charkha to make khadi out of cotton in school.

Driven by the principles and ideology of Gandhi, Prabhaben continued her contributions to society after India got independence. She went on to work in various social sectors like education, health, women empowerment, natural disaster relief operations and during the wars with neighbouring countries.

For her selfless and immense hard work, she was awarded India’s fourth-highest civilian award, Padma Shri in January 2022.

“I am very proud and moved to receive the prestigious award for my services. This award, however, is not just mine. It belongs to every individual who believed in me and encouraged me to perform the services. I thank my late husband, Subhash, for letting me pursue my passion in a society which was a far cry from gender equality,” Prabhaben tells The Better India.

Although she retired in the late 1990s, she continues guiding the new generation and giving her inputs in various matters.

She is all set to turn 93 on 20 February but even at this age, her spirits are as high as when she had established the playgroup in Vapi district in the 1960s. Her memory is sharp as she settles on the sofa to chronicle her journey of three decades.

Taking Gandhi’s ‘Be the change you want to see in the world’ saying as gospel truth, Prabhaben became a catalyst for change. She discontinued her studies in class 7 and got married to Subhash who was working for Gujarat’s electricity board.

When the couple moved to Bardoli district due to employee transfer, their eldest daughter was only 1.5 years old. There was no school in 1960 and Prabha wanted her children to graduate.

So she opened a Gujarati-medium ‘Bal Mandir’ (primary school) for children. At first, she taught her daughter and other children in the neighbourhood herself and later hired teachers. To fund the school and salaries of teachers, she even started working in a Khadi Ashram as a clerk.

“Two years later, another transfer took us to Daman and there too there was no school. So, instead of directly starting a school, I decided to start a Mahila Mandal and opened the school through them. In 1963, we officially formed the Daman Mahila Mandal and began our operations,” she says.

Forming a women’s group was not as easy as Prabha makes it sound. The setting was rural and the era was the ’60s, a situation where women still observed the purdah system and didn’t venture out.

The initial meetings were kept at her house so that women could freely express themselves and through these discussions, Prabhaben educated them on basic education and healthcare.

“The women couldn’t even sign their names, let alone know the importance of education for their children. I remember we used to organise classes for women at night after they would finish their household chores. Most of the time we did not have electricity, so we studied using candles,” says Prabhaben

As more and more women joined the Mahila Mandal, Prabhaben and her team went one step ahead and opened a credit society to loan women who wanted to start small-scale businesses like papad making, sewing, grocery store, etc.

Alongside empowering the women, the organisation also kept an eye on other projects like helping the needy. One of their remarkable contributions came in 1965 when they opened a vegetarian canteen in a government hospital for patients’ relatives.

Prabhaben recalls, “There were no stores, hotels or restaurants around the hospital and people from other districts too would come there. The stranded relatives had very few options so with the help of hospital staff, we opened a canteen that is functional even today.” Between 1965 and 1971, the Mahila Mandal was very active in raising donations for the soldiers and the martyr’s families. During the two wars, Prabhaben and other members knitted sweaters and sent them to the soldiers fighting on the borders.

“Our then Prime Minister Lal Bahadur Shastri was touring the country to raise funds but we couldn’t manage to raise much so we made sweaters and sent rations via trucks. This period was surreal for me after witnessing the independence movement. We had not asked for freedom only to suffer at the hands of our neighbouring countries,” she says.

Prabhaben and her colleagues conducted similar cloth bank projects during the Bhopal Gas Tragedy in 1984, the devastating Kutch earthquake in 2001 and more recently the Kerala floods in 2018.

“We donate, stitch and purchase clothes for adults, elderly and children whenever such a crisis arises,” says Prabha.

Over the years, Prabhaben has worked on several issues and improved the lives of many individuals, from children to women. Her zeal and drive are what make her an award-winning social activist.

The journey, she says, was not easy as in the beginning she had to run the Mahila Mandal with very little money available.

“Subash earned Rs 250 per month so I would save most of it and instead of using it to buy things for me, I would donate it to the Mahila Mandal. Ek ek pai jod ke hum ne kaam kiya hai (We have worked by saving every penny),” she adds.