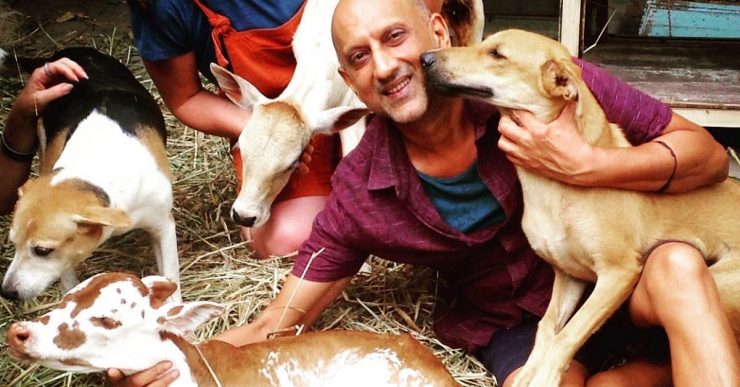 Atul Sarin (58), a resident of Siolim town in North Goa, says his love for animals stems from the innumerable visits he took with his father to wildlife parks during his childhood in Mombasa, Kenya. His parents had moved abroad in hopes of securing a better future. Citing instances of political instability in the African country, he says his family moved to the UK when he was 13 years old.

“I studied law but soon after my graduation, I joined my parents’ retail store of hardware and gardening supplies. But I wasn’t happy with my life there. It was stressful, expensive and the weather was atrocious. By 2005, I’d made up my mind to quit the business and move to India for some respite,” he explains.

The same year, Atul bought a Portuguese house built in the 1930s in Siolim. With its terrazzo-tiled floors, high ceilings, oyster shell windows and a garden sprawling with mango, banana and jackfruit trees, he realised it would serve as an ideal guest house during Goa’s peak tourist season between October and March.

“The area was frequented by wealthy visitors who fed dogs at the nearby Ashvem and Morjim beaches. But during a morning walk in my first monsoon in Goa, I was horrified to see just how many dogs were dying of starvation. The beaches were empty; even the shacks were shut because there was no business and no one was around to take care of the dogs. I started visiting them with food every morning, and even gave first aid to the injured ones,” he recalls.

At the same time, he had begun to feel troubled at the scores of stray cattle wandering in his neighbourhood, most of whom were severely malnourished and abandoned. He thought he could help out by volunteering at shelters but quickly realised that there were hardly any animal NGOs in North Goa.

“Back in 2008, I saw a cow with three legs trying to cross a busy road. It was a really sad sight — she was struggling to walk but everybody was pushing her around to avoid traffic. I wanted to help her, but civic officials told me that I would need to get a signed affidavit from her owner [to take her in]. I now realise that it wasn’t necessary since she had already been left to fend for herself, but I asked around and found the owner. He was happy to let go of her because he couldn’t afford to keep her anymore. I took her back to my garden and named her Tara. She was my first rescue,” he tells The Better India.

Today, Atul’s garden is recognised as a cattle compound by the state government and functions under Welfare for Animals in Goa (WAG), his animal welfare NGO registered in 2012. It is the only one in North Goa that presently rescues stray cattle, having rehabilitated close to 5,000 cows so far, he claims.

According to Atul, WAG has been able to rescue and rehabilitate more than 15,000 animals including cows, goats, donkeys, pigs, dogs, cats, and even birds such as chickens, parrots and turkeys. ‘I dressed wounds and bottle-fed calves.’

Built around Atul’s house, the premises of WAG include two separate shelters for injured animals— one for cattle and the second for other recovering animals.

It also has a veterinary rescue clinic that can accommodate up to to 20 cats and dogs at a time. Some 120 resident animals, including 70 abandoned cows, are taken care of by the 10 staffers at WAG, comprising two veterinarians, assistants, caretakers and rescuers, and a few dedicated volunteers.

Recalling the early days of his independent operations, he shares, “The government’s system requires NGOs to maintain a record of cattle on the streets and house them in compounds set up by municipalities. But there were no such facilities when I started rescuing them in 2008. A lot of people had begun bringing their injured cows to me, and I could tend to nearly 50 of them with the help of a veterinarian and a couple of volunteers. While their owners took them back after their treatment, some eight injured cows like Tara remained under my care.”

Atul says he had turned his garden into a compound by sectioning its front parts and kept a few cages to separate the cattle from the dogs and cats. Back then, he spent as much as Rs 50,000 every month to ensure their well-being.

“People in the area weren’t knowledgeable about animal care, and I had to teach myself everything from their treatments to a specialised diet. For instance, a cow with a hoof injury was required to have its wound flushed every day. I used to clean the wound, apply medicinal powder and dress the bandaging myself. I also took care of abandoned and injured calves, for whom I sourced milk from a nearby farm and bottle-fed them,” he explains.

In 2010, Atul decided to stop servicing his guesthouse to solely focus on his efforts to help these animals. “My savings were beginning to dwindle. I wanted to set up an official trust which could not only address the space constraints but also provide a portal for animal lovers in the city to help us out with donations,” he says.

While Atul previously connected with private veterinarians to ensure the sterilisations of cats and dogs in his neighbourhood, he says the team at WAG has completed over 6,000 procedures over the past decade.

Presently, WAG’s monthly expenses of approximately Rs 3 lakh per month are largely addressed by its fundraising and ‘sponsor an animal’ campaigns. Feed for their resident cattle, however, is sponsored by a state government scheme providing Rs 75 per cow every day, says Atul. In 2014, WAG also set up an inhouse biogas plant, which Atul says is one of the very first in North Goa, fuel from which is used to cook khichdi to feed dogs living on nearby beaches.

“We have two full-time staffers who mix cow dung and urine with water and feed the slurry into the biogas plant. I believe all cattle compounds and gaushalas should have the option to generate income from their cattle without abusing them. This biogas can also be used to make eco-friendly products like incense sticks and floor cleaners,” he says. “With such sustainable systems in place, people wouldn’t abandon even their dairy cattle who, after serving their families for some 15 years, are usually sent to slaughterhouses.”

Atul says that while the healed cattle at WAG are now sent to a gaushala in South Goa, the NGO also organises adoption camps for dogs and cats, finding a couple hundred of them loving homes every year.

“Traditionally, animal welfare organisations don’t permit visitors to their shelters. But in our experience, it helps with donations because people can witness their suffering first-hand. For people who adopt our animals, we provide free medical treatments for a year,” he says.

With over a decade’s experience in animal relief work, Atul says he doesn’t consider himself retired, pointing out that he works much harder now than he ever did on his business.

“Even if one isn’t particularly fond of animals, they can always help such organisations with their administration and funding work, which is a full-time job in itself. There’s a lot of heartache involved. It’s particularly sad when we lose young animals to abuse because they never even got a chance to live a dignified life. But we have to continue focusing on the positives,” he notes.

“Historically speaking, all great minds have had one thing in common — they realised that until you respect animals and recognise their rights, there will not be peace among humans. India is one of the largest carriers of rabies and we can address the issue [to an extent] with our sterilisation programmes. By keeping cattle off the streets, we’re also able to prevent collision road accidents which result in the death of hundreds of people,” he signs off.

If you’re an Indian bank account holder and wish to help Atul in his cause, you can transfer funds to the following details:

To volunteer with WAG, you can fill this form.