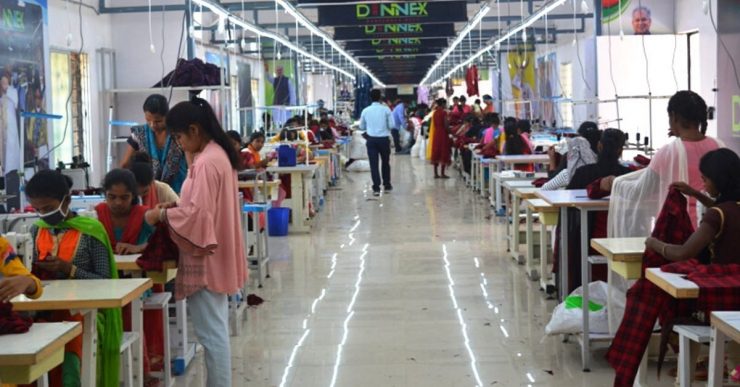 Pramila Netam’s voice shook as she recalled how her father fell to bullets during the dreaded Salwa Judum which continued from 2005 to 2011 in Bastar, Chhattisgarh. An anti-insurgency movement, it aimed to counter the Naxal movement through tribal youths but ended due to repeated allegations of gross human rights abuses.

Now, in her 20s, Netam supports her family of three by working at a garment factory at Haram village of Dantewada district in southern Chhattisgarh. “My family fled Abujhmar during Salwa Judum. We stayed at a relief camp for a few days and later came to Geedam block where a few of my relatives lived.” Even now, the densely forested Abujhmar region in central India spread over 4000 sq km is a Maoist stronghold. Back then, it was a scene of violence.

The college dropout says she likes stitching tops and palazzos. Though most comfortable in Kurtis, she loves trying out some of the latest clothes. “When I see other girls wearing them, there’s a strong urge to try on western clothes,” Netam says.

Garment manufacturing is making a splash in Dantewada, which has been affected by Naxal violence for several years. The district, a part of the Bastar sub-division, has a low literacy rate of 33 per cent and limited livelihood opportunities. Traditional means of earning income are agriculture and the collection of minor forest produce.

But clothes make a fashion statement, and the garment factory in Haram, called Dannex or ‘Dantewada Next’, is a hub of feverish activity during morning hours. Besides Haram, three other Dannex factories have been set up since last year in Katekalyan, Karli and Barsoor where rural women, mostly Adivasis, have been employed. Today, they are earning between Rs 7,000 to Rs 12,000 per month.

All the four units together employ 749 women.

Kritesh Hirwani, the principal of Livelihood College which was set up in 2011 for skill development, says the idea behind Dannex was started by the district administration to offer livelihood opportunities to women. The minimum age limit is 18. It is a six-day working schedule with Sunday off.

Amid a conversation with Hirwani, a few male workers unload rolls of cloth on laying tables for cutting. These arrive from companies based in New Delhi, Bengaluru and Chennai. Manager Kajol Banjare, who looks after all the four factories, says that the companies send raw materials with instructions about designs. The women make pants, palazzos, skirts, tops, salwar kameezes and kurtas. “After cutting the cloth rolls according to sizes, they are stitched using Juki machines. After that comes ironing and final packing with price tags,” Banjare adds.

Though there are a few men, there are 200 women all from nearby villages working in Haram which opened in January 2021. Working hours start from 9.30 am and go on till 6 pm. Most women usually deliver 60 pieces in an hour.

A consultant for Dannex says all four factories are running on old infrastructure. For instance, the Katekalyan unit is running on a vacated CRPF camp. Thus, it is a sustainable business model from the start.

Dantewada district collector Deepak Soni says, “Often livelihood training programmes do not succeed in the absence of market linkages. So, the aim was to link women with markets to make the venture successful through long-term MOUs with different companies for five years.”
The women received training for 45 days. Prabha Tumreti, a resident of Ghotpal, has been working in Haram since March last year. The girl admitted she had zero knowledge of stitching but was interested as two others joined from her village. Banjare says that though a few women knew sewing they couldn’t handle professional machines which are fast and perform many tasks at one go.

However, not all employees are into stitching. Neetu Netam, who comes from Geedam, is engaged in quality checks, says, “This is important. If finished clothes have defects, companies will return the products and we will have to send them again. So, some of us make sure that everything’s perfect; no stitches or buttons missing anywhere.”

From April last year when production started till now, materials worth Rs 40 crore have been shipped out. Initially, the women were making 30,000 pieces, but from this month the target is over a lakh. Two prominent brands with which Dannex has a tie-up are Vishudh and Tokyo Talkies and the clothes are available on the e-commerce site Myntra.

Deepak adds that the initiative would bring about gender parity by recognising women’s role in the market. “Moreover, now they have a say in family matters and many feel empowered.”

Standing by the window Asmati Maurey is busy ironing and seems a bit cut off from those employed at sewing machines. A look at her reminds one of Alison in John Osborne’s play ‘Look Back in Anger’, where she is ironing most of the time. “I have no option. I am unable to stitch due to weak eyesight. But I like the job and am happy to earn a decent income.”