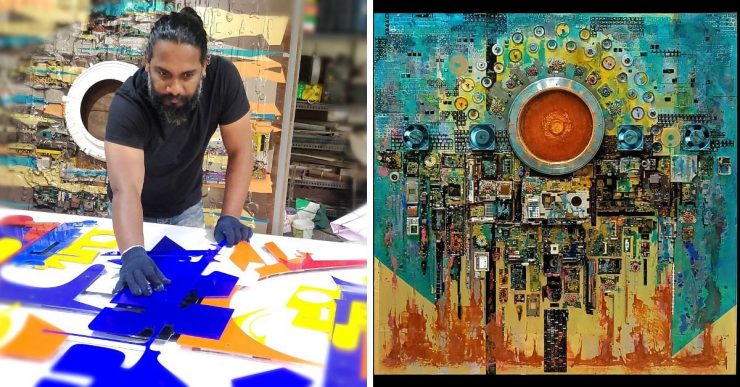 Chuckling softly, Mumbai-based e-waste artist Haribaabu Naatesan admits that he didn’t expect the Prince Charles of Wales, would stop by to discuss his art exhibited on the walls at a meeting of top business leaders of the Indian Sustainable Council held in 2019 in Mumbai. The meeting was attended by corporate giants like Ratan Tata, and Mukesh Amani to name a few.

“The Prince wanted to know each aspect of the art I make from scrap — from how I ideate, where I get the e-waste, how I paint, solder the different parts that are used in the works, who are my clients, how much e-waste is used, etc. I wasn’t expecting that he would be so deeply interested in this art and spend more than half an hour with me,” recalled the artist.

The art that he creates from trash, many a time salvaging it from dump yards, can be sold for a minimum of Rs 1 lakh to Rs 20 lakh and above per creation. And he charges much more for commissioned work. And many organisations, including BIMA (Bombay Iron Merchant Association), Aquatic Museum Science City, Ahmedabad, Budweiser Bengaluru, Tamiz Sahar Azerbaijan, SBI Mumbai, Viacom 18, 9X Network, Kirloskar Pune, etc, along with many real estate giants display his specially commissioned work on their premises. He makes large sculptures the biggest he has made so far is the whale fish measuring 56 feet by 19 feet for the Aquatic Museum and his wall hangings measure from one foot by one foot to six feet by six feet.

His saga with the throwaways, trash, junk, waste or whatever other labels can be given to discarded material started in his mother’s kitchen in Chennai when he was a mere school-going child. Whatever his mother used to throw away like broken vessels, knives, spoons, TV remotes, gas lighters, etc, would find their way to Naatesan’s study table and the young lad would happily create some art or the other much to the amusement of his parents.

He carried this penchant even when he decided to join NID (National Institute of Design), Ahmedabad for a post-graduation degree in Animation Film Design. For the admission presentation, he exhibited a spider and a crab made from aluminium hangers, balls, etc, collected from scrap and this was highly appreciated. During two years of studies, as he had befriended faculty members of other departments he got to experiment and learn different aspects of making his art.

Today, his studio located in one of the western suburbs of Mumbai resembled a junkyard. “Even my home,” says the artist, “is full of used and discarded pipes, spindles, hooks, wheels, bumpers, fenders, hair clips, motherboards and what not.”

As ordinary citizens, we won’t give a second look at these objects. But Naatesan sees life in them. “My art has to be green design. I give ‘mukti’ to any kind of junk or scrap,’’ says the 42-years-old.

He adds, “Science believes that matter and energy are neither created nor destroyed. It just changes form. Just because they have outlived their use as known to us, doesn’t mean they should be discarded or dumped. We should give them new birth.”

It was fun to watch viewers’ reactions and exclamations while watching Naatesan’s solo art exhibition in January this year in Mumbai and later in a group show in April at the India Art Fair in Delhi. Large frames after frames on the walls mesmerized viewers as they couldn’t fathom that their discarded washing machines, microwave ovens, TV sets, old music-video cassettes, keyboards, motherboards and hordes of other e-waste that one can imagine had become a magnificent work of art.

The titles of each of his works also are imaginative. For example, there is a work titled ‘Remembrance’ which has used old music tape cassettes, metal covers of floppy disks, CDs, washing machine turbines, etc, glued on the large ‘canvas’ using sepia and dull gold-hued paints to give a nostalgic feel. All these items are no more manufactured or used, with the result people just dump them and Naatesan creates art from them.

Then there is a composition titled ‘Trinity’ using mainly circuits retrieved from computer motherboard. The entire work has a pinkish translucent appearance with circuits painted delicately in white. It gives a cosmic effect to the work. In the work ‘Nelumbo—Blue waters and pink floats’, Naatesan has used the round steel covering of the front-door opening of a washing machine as the centrepiece surrounded by floppy disks, and electric circuits from motherboards and painted them sky blue.

As the artist says he alone manages to convert a minimum of 25 tonnes of e-waste into art. If all the e-waste could be re-used then the world won’t be facing such a colossal amount of destructive matter which is taking a heavy toll on the planet. In fact, according to The Global E-Waste Monitor 2020, consumers discarded 53.5 million tonnes worth of electronics in 2019, up by 20 per cent in five years. India generated some 10,14,961 tonnes of e-waste last year ranking third after China and USA.

The major e-waste is mobile phones and computer equipment. Moreover, recycling of waste has increased to 11 per cent in 2020-21 from 3 per cent in 2017-2018, according to Central Pollution Control Board India. But that’s not enough.

Luckily, Naatesan isn’t the only artist striving to create e-waste art. Globally many artists are striving to generate awareness of the dangers of piling e-waste through their art. A couple of months ago the famous The Design Museum based in Kensington, London, held an exhibition of art from waste by designers and artists from all over the world. Many of these artists displayed huge creations from the e-waste. The goal of e-waste art is to create awareness among people of the hazards of e-waste and how we can and must recycle this waste. Through their art, they support the work of environmental activists.

The e-waste artists feel that art can become a starting point for a conversation. Their art displayed at an exhibition helps people understand that e-waste can be recycled, which was very evident at Naatesan’s exhibition of art.

“That’s what I want to do. I want people to know that their throw-away trash is a base product of an art form. I see science merging into art into design into spirituality. I create,” the artist signs off.

The why and how of disposing electronic waste; written by Sejal Mehta; published by Mongabay on 25 August 2020

An Alarming Environmental Concern! Electronic Waste Processing Up By 4 Times, Yet 90% Remains Unprocessed; written by Ratika Rana; published by The Logical Indian on 21 December 2021