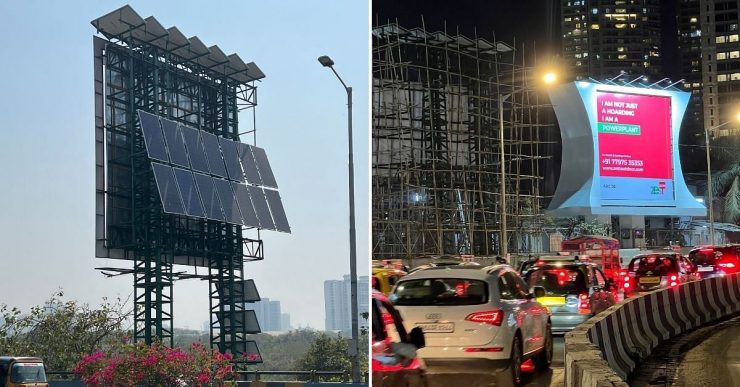 We are at a juncture where efforts have to be made at reducing carbon emissions which have increased to alarming levels.

In India alone, around 75% of electricity is produced through coal in thermal power plants, which contribute over half of the total CO2 emissions in the country and around 2.5 per cent of global GHG emissions.

These statistics underline the need to move towards producing clean energy. Realising this need, Zest Outdoor, a leading Outdoor Advertising agency based out of Mumbai has come up with an innovative idea of installing solar panels with billboards, thereby generating electricity.

As marketers, advertising agencies have the upper hand at creating awareness while inspiring change. And so they have come up with a unique solution — solar billboards.

Mustafa Akolawala, the founder of Zest Outdoor media, says, “In 2019, I started thinking about installing a few solar panels on my billboards just for powering the lights on them. That’s when it hit me — why not install solar panels extensively which would generate enough electricity thereby contributing towards reducing the carbon footprint.”

The company has now installed around 17 such solar billboards across Mumbai city and is supplying the electricity produced to Mumbai’s Western Railways.

Rajneesh Bahl, the business head of Zest Outdoor, says, “This is the first time in India where billboards have such large installations of solar panels to supply energy. We even got mentioned in the India and Asia Book of Records for this.”

“Any billboard that is 30 sqft will have approximately 900 sqft of display area with at least 1000 sqft of carpet area. So, I thought of using that space for installing solar panels on it,” he says, adding that the belief that the panels have to be installed horizontally was wrong. “We proved that even the vertically placed solar panels can generate electricity while placing them horizontally,” Mustafa says.

While implementing the idea, he says that it wasn’t an easy process, as he had to consider a lot of technicalities regarding setting up the solar billboards in a workable way. “Starting from October 2021, it took us around four months to set up all the solar billboards and finally launched it in February 2022,” he adds.

Speaking of building a structurally sound innovation, he says, “We had to consider the wind, as well as the load and solar panels, are usually heavy. So, I brought on board a few IIT engineers to design the billboards, in such a way that it can accommodate the solar panels safely and thereby produce a large scale of energy.”

The 33-year-old entrepreneur also had to ensure that the billboards looked aesthetically pleasing as he had to get brands to advertise on them.

After successfully experimenting with a prototype, the innovation was implemented on a large scale and later bagged a contract to supply electricity for the railways. “Currently we have installed around 12,000 sqft of solar panels on our billboards across Mumbai in 17 different locations and the electricity generated is being supplied to the Western Railways, free of cost,” he says adding that all these billboards are placed near the railway tracks and stations at Cuffe Parade, Mahalakshmi, Carter Road, Bandra RoB, Andheri and Oshiwara.

“This initiative will help prevent carbon emissions of about 184 metric tonnes which is equivalent to planting around 3,047 trees,” he claims, adding, “We have a billboard at Bandra ROB, 30×30 sq ft in size, which has around 40 solar panels on its back installed in a slope design.”

A media representative of the Western Railways says, “The Railways is in a contract with Zest outdoors advertising agency and their solar billboards have been installed at 17 different locations across the Western suburbs, promising supply of green energy to the Western railways, free of cost.”

Deepak Mulchandani, Senior Divisional Commercial Manager, Wester Railways, adds, “The installation process is done and they have started functioning in most of the locations. The electricity produced from these solar billboards is being directly transferred to the feeder points of the railways in certain locations which are close to the railway stations. In locations far from the stations, the electricity is being transferred to the railway colonies. So, by implementing the concept of reverse metering, the meters in the colonies will be reversed backwards, reducing their power consumption.”

Rajneesh adds, “We are getting very good responses and have been getting enquiries from different brands in this regard. This is the first time a hoarding which is only installed for advertising is serving multiple purposes.”

Talking about the concept of carbon credits, he says, “When we produce green energy, we help reduce the CO2 emissions during the burning of coal while producing electricity. So, that makes us eligible for earning carbon credits. But those carbon credits have to be formalised and we are currently in the process of that. Once it’s done we can transfer the benefit of carbon credit points to the client as they are indirectly contributing to it.”

After setting a groundbreaking example and taking steps towards a greener future, the outdoor advertising company now aims to expand their green mission to different parts of the country.