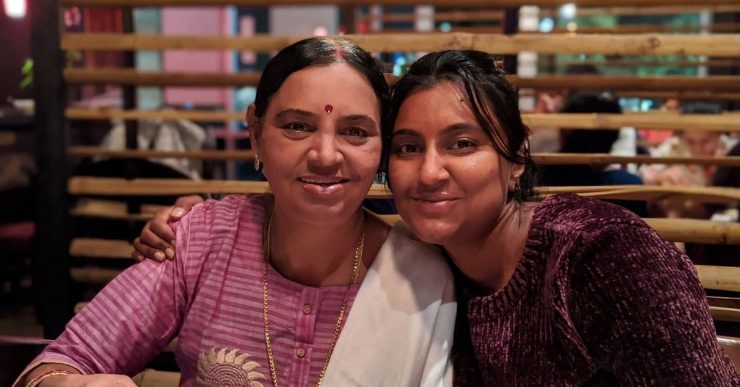 In 2009, software engineer Satya Ayyagari (36), a native of Nasik, Maharashtra, first moved out of the country to pursue a career opportunity in Singapore. A few years later, she met her San Francisco-based husband on an online matrimonial app and moved to the States shortly after their wedding. Since 2017, the two have been based out of Austin.

She says, “All through these years, my mother used to send me parcels of kaju katli, peanut chikkis, homemade pickles and tailored sari blouses from Hyderabad. It never occurred to me that there was the need for a business [model] in this space until October 2019 when I was about five months into my pregnancy.”

“I was looking to order baby winter caps and jubbas, among other postnatal products, and even a few matching outfits for the cradle ceremony. But my mother had been keeping unwell and couldn’t keep a tab on the deliveries at her home, let alone ship these parcels to me. Despite living in the US, it was hard for me to come across such products in an affordable range — something that I was getting for around USD 500 here, I could get from India in USD 150,” she adds.

Later that night, Satya couldn’t stop thinking about how it shouldn’t be this difficult for NRIs to source homegrown products. She called up her mother, asking if she felt the same way and wanted to try fulfilling the deliveries she’d made for Satya all this while; only now for other people, too.

“She agreed readily and in a spur-of-the-moment decision, I made a Facebook page and a basic website the same evening to promote our idea of leveraging the cost of Indian products. We shared these with our circle of friends and relatives settled in the US, the UK and Canada. Within an hour, we got our first order from California. It was from a woman who was pregnant herself, and wanted to buy nutrition supplements from India,” she adds.

Three years down the line, the mother-daughter duo has been able to transform their impulsive decision into a flourishing small business with yourDesiCart, a shipping platform that has delivered close to 2,000 international orders to countries such as Australia, New Zealand, Hong Kong, Malaysia, Ethiopia, the UAE, Mauritius, Indonesia, Philippines, Vietnam and Germany, among others. “I learnt the hard way how important it is to choose the right shipping partner. Even until four years ago, the international delivery infrastructure wasn’t as developed and it would take up to 10-15 days for me to receive an order in the US. Several shops, both offline and online, don’t provide an international shipping facility. If they do, buyers end up spending an exorbitant amount for the smallest of orders. With yourDesiCart, we have been able to bridge that gap. Now, even I don’t bother my mother and place my orders here,” Satya smiles.

In sync with their tagline ‘You Buy, We Ship’, yourDesiCart enables NRIs from across 220 countries to buy items from anywhere in India and have them delivered within three to seven days. Among their most frequently ordered products are masalas from Delhi’s Sitaram Diwan Chand, pickles and papads from Hyderabad’s Vellanki Foods, authentic herbs from Kerala, ghagras from Gujarat, puja supplies, both commercial and tailored apparel and home decor items. The platform ties up with domestic delivery partners like Delhivery, Blue Dart and Dunzo to arrange pick-ups from local stores.

A bulk of their orders, however, are placed from e-commerce companies such as Amazon, Flipkart, Myntra and Nykaa, says Satya.

“As soon as users register on our app, they’re provided with a unique locker address at our warehouse in Hyderabad. This is a personalised ID that is valid for every subsequent order that they place. So while we don’t have a marketplace of our own, we facilitate the completion of our users’ orders by providing them with a temporary storage facility. At the warehouse, products are inspected for damage and packed once again. Users may also order multiple items and place a shipment request only after all of these are delivered and consolidated into a single package,” she explains.

Since December 2020, yourDesiCart has been fulfilling its deliveries via international courier service, DHL. “Earlier, we used to make use of other third-party delivery services but it made for a costly affair. Owing to our official partnership with DHL, we are now able to offer users timely deliveries at a competitive range, which is even cheaper than the services offered to their customer base,” says Satya. “For instance, a user may have to spend as much as Rs 12,000 to have a 10 kg order shipped to the US via DHL. But if they make use of yourDesiCart, the same order can be fulfilled for Rs 6,500.”

“The final cost of a shipment depends on the weight of the package, but the base price is fixed at Rs 750. We also have a shipping calculator that takes into account a package’s dimensions and a particular city’s postal code, allowing our customers to arrive at an estimate beforehand,” she adds.

For users who don’t have access to an Indian phone number and currency—often mandated by online retail merchants—or simply don’t have the time to buy an item, yourDesiCart’s provides an add-on service of ‘personal shoppers’ who make the purchases for them.

“This has proved to be exceptionally helpful for our customers who don’t have an Indian ethnicity. They’re looking to buy products from the domestic market and often seek recommendations on what an appropriate buy would be, in terms of both quality and pricing,” she adds. ‘Kudos to My Mom’

Even as yourDesiCart steadily completed its first few orders by the end of November 2019, its services remained on hold for the next six months. Satya’s parents had visited her in Austin right in time for their grandchild’s birth and she had to prioritise her daughter’s nutrition over the business, she says. It was only in May 2020, at the peak of the first wave of the COVID-19 pandemic, that her mother Dhatri Ayyagari (59) resumed the deliveries from her home.

“We had started receiving enquiries from Indian residents stranded abroad, a lot of whom were senior citizens. They were struggling to find medicines for conditions such as blood pressure and diabetes. My mother procured these from healthcare outlets in Hyderabad and began shipping them immediately,” says Satya.

It was then that yourDesiCart also started fulfilling a ‘reverse’ business model — accepting orders from international customers for domestic deliveries.

“A lot of these enquiries came from people whose parents and elderly parents weren’t able to take care of themselves during the lockdown. Locally, too, there was a growing need for delivering essentials and we wanted to do our bit to help out. We started tying up with local logistical partners to fulfil orders of medicines, vegetables and other household items,” she says.

It wasn’t until three months ago that yourDesiCart launched its mobile app. “Users had to register themselves on Google Sheets and we coordinated with them entirely on WhatsApp back then. Despite it being a relatively cumbersome process, we continued to receive excellent reviews. Our customers were extremely thankful to have a platform like ours in times of urgency,” she notes.

“It wasn’t until last year that we rented a warehouse to scale our operations. All orders were delivered to our house and taken care of by my mother, with some help from my father and a couple of domestic workers she had onboarded. They had been asked to leave their jobs owing to the COVID-19 spread during the lockdown. Kudos to my mom for patiently teaching them the finer details of inspection and packaging,” she says with pride.

The current organisational strength of yourDesiCart stands at 20 employees, 80 per cent of which are women, says Satya. “We continued to hire house-helps for our warehousing needs, but there are a couple of men to help out with the bulkier orders. At the operations ends, too, the customer support executive, the personal shopping coordinator and the business lead are women. They are mothers who’d never worked before joining us,” she adds.

“There’s an inherent sense of satisfaction in knowing that we’re providing a steady source of livelihood to women, most of whom are single-earning members of their families. My upbringing always led me to actively participate in community welfare, but our approach through yourDesiCart is a lot more feasible than, say, making 20 donations every month,” she shares.

Meanwhile, Dhatri says she’s pleased about making a transition from sending orders to Satya, then her friends, and now to customers from all over the world. “It’s quite interesting to assess the variety of items dispatched to us. I enjoy spending time with the women at the warehouse and we often have our meals together. My interest in our business has only grown over the past couple of years and it makes me happy to be running one at this age,” she says.

Satya notes that as a bootstrapped venture, yourDesiCart hasn’t had the opportunity to undertake advertisement on a large scale. The platform makes use of word-of-mouth publicity and its social media channels to reach out to new customers.

“During the seasons of Diwali and Dussehra, we’ve recorded as many as 500 orders per month and the transactions have amounted to Rs 20 lakh. But we haven’t been making any profits as such. The revenue goes in covering the inhouse expenses of the warehouse’s rental and security fees, procuring packaging material and providing timely salaries,” she explains.

“It’s only because of our pure intentions, a loyal customer base and supportive employees that we’ve been able to keep the business running. We’re taking baby steps towards expansion and hope to open more warehouses in metro cities soon,” she signs off.