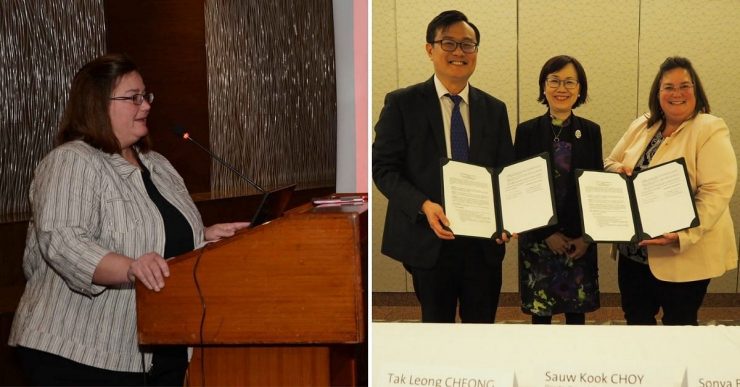 This article has been sponsored by Underwriters Laboratories.

“Our beliefs about ourselves shape the decisions we make in our personal and professional lives and contribute to the person we become. It is only self belief and confidence that one can truly succeed.”

This is a thought that inspired Sonya Bird to pursue her passion for creating sustainable change through technology and mathematics.

“From a young age, I loved Math and science, and in my spare time, I enjoyed puzzles, especially logic puzzles. I was a member of the competitive Math team in my high school, so I was one of those people who stayed after school to do more Math. I was lucky that my school counsellor and my father both steered me towards considering engineering when I went to college. Based on aptitude and interest tests, I ended up in electrical engineering. The lab work and power problems associated with electrical engineering were just another form of logic puzzles and it all just made sense to me,” says Sonya.

Working at Underwriters Laboratories (UL) since 1989, she is now the Director of International Standards at the company and an inspiration for many in STEM.

‘Becoming the person I want to be.’

Having worked in UL for over 30 years, Sonya is a name to reckon with. In her role, she leads UL’s international standards outreach and international harmonisation activities which involves her managing aspects of safety and security that encourage evolution in product and facility standards that are inclusive and sustainable.

She is the US National Committee (USNC) vice-president technical, the chair of the USNC Technical Management Committee, and the US representative to the IEC Standardization Management Board. She is also an active member of the American National Standards Institute (ANSI), serving on the International Policy Committee (IPC), and the ANSI International Forum. Sonya has also represented the US in several delegations to the ISO General Assembly and The Pan American Standards Commission COPANT.

This is not even half of the entire list of her achievements. Despite such an expansive and diverse portfolio of leadership achievements, according to Sonya, it is her work enabling sustainable safety and performance standards that truly speaks to her. And, she found that opportunity through an advertisement for an engineering job that required good writing skills.

“When I was set to graduate from university, I saw an advertisement for an engineering job that also required good writing skills. I thought this was the perfect descriptor for me – a solid engineering degree with a desire and aptitude for writing, so I applied. That job was for an introductory engineering role in the standards department at Underwriters Laboratories. I applied, and in the process learned about Underwriters Laboratories and its long history of working for a safer world. The job and the company turned out to be such a perfect match for me. That was nearly 33 years ago, and I have been thrilled to be at Underwriters laboratories ever since,” adds Sonya, who started her career as a standards project manager. This position allowed her to focus on the safety requirements for many traditional UL standards, including battery chargers, ceiling fans and portable tools. Sonya began working with the portable tool industry on common requirements in the US and Canada and the effort extended to more international work. For her, the most gratifying aspect was to know that through standards development she was creating a positive impact on the safety system of not just one country but the entire world.

“Once I got involved in international standards, I became the secretary for International Electrotechnical Commission (IEC) technical committee 61, responsible for addressing the safety of appliances for household use. This committee covers all types of appliances – from washing machines and clothes dryers to coffee makers and beauty care. I recall one issue that we addressed within that international committee. A delegate to the meeting had data that showed potential excessive surface temperatures on an oven door. While an adult may touch the door and feel the heat and pull away, a child may not recognise the danger immediately. The delegate had pictures of children’s hands that had received burns from touching the hot oven door for too long. The committee was able to look at the requirements in the standard, as well as requirements in other related standards (such as UL’s standard for ovens) and introduced a change to the text to protect children from burns,” explains Sonya.

She further adds that standards like these matter for several reasons, including establishing a baseline for addressing safety, security, and sustainability. These standards provide rules for product design and situate common requirements to facilitate trade across borders, and in a way directly impact lives through contribution to the United Nations Sustainable Development Goals.

One example of this is establishing gender-responsive standards. Let’s take an example of the usual crash test dummy employed by automobile companies to evaluate their safety standards.

In this case, several reports have been cited stating that these dummies do not adequately reflect a woman’s body type, especially a pregnant woman, owing to which a seat belt may sit differently across a woman than a man.

Talking about how UL’s standards are made gender-responsive, she adds, “A standard which accounted for gender inclusivity is UL 3741, the Standard for Safety for Photovoltaic (PV) Hazard Control. Intended to help reduce shock hazards for firefighters responding to emergencies in homes with PV systems, this research noted that physical characteristics such as body weight and skin sensitivity could have a direct effect on certain threshold limits for electricity and that women tend to have lower threshold limits than most men. As a result, for the protection of female firefighters, the standard uses DC body resistance data as modified for females, which is roughly 2/3rds the limits for males.”

She says this is what drives her to do better every day. “You ask what keeps me going? This is what keeps me going. To recognise that standards have a direct impact on safety around the world. Through our work we hopefully have reduced the chance of other children burning their hands or female firefighters undergoing shock hazards,” adds Sonya, who was named a Distinguished Member of Technical Staff and most recently as the Corporate Fellow of the William Henry Merril Society at Underwriters Laboratories, in recognition of her sustained contribution to the fulfilment of UL’s public safety mission.

Today, an icon for women aspiring to build a career in STEM, Sonya’s advice is: “Never hold yourself back from doing the best you can. Find your passion and look for ways to get involved and make a difference.

Her life’s work was recently showcased through a podcast organised by Underwriters Laboratories as part of the Word to the W.I.S.E. (Women in Science and Engineering) campaign. This podcast series involves interviews with remarkable women like Sonya, who have chosen science and engineering as a career and have dedicated their lives to creating a safer, more secure and sustainable future. Through Word to the W.I.S.E, Underwriters Laboratories hopes to build on our legacy that drives transformative change in pursuit of a safer and more resilient society, by inspiring more young women to a career in the field of STEM.

You can nominate other such women to be a part of the show or send in your questions for future guests on the Word to the WISE podcast. Visit here for more information.