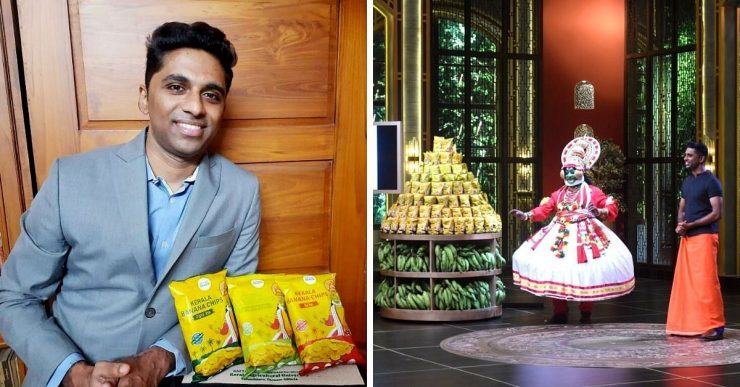 Even as he toiled in the corporate field, Alappuzha native Manas Madhu was constantly thinking about a business plan that he could start from his homeland. “I always knew it should be something related to the food industry. But it wasn’t till I read an article about value addition that I thought of opting for Kerala’s traditional fruits,” says the 36-year-old.

Manas says he read more about value added foods, which are made by taking a raw commodity and changing its form to produce a high quality end product. He notes that two options stood out to him — jackfruit and banana. Of these, he picked the latter.

In 2018, he quit his job to focus on his newly-launched company Beyond Snacks, which sells banana chips in four different flavours.

“When I travelled to other states for my education and work, my parents would pack banana chips in my luggage,” he recalls in conversation with The Better India. “If you are travelling from Kerala to another place, this snack is a must-have. But interestingly, there were very few brands that sold banana chips exclusively. We depended on local shops and bakeries. Beyond Snacks wanted to change that narrative and make authentic chips available all over the country in premium quality.”

Manas says his company procures nenthran (banana) from farmers in Kerala and other south Indian states based on seasonal availability. The bananas are then processed in their factory in Kochi without human touch and sold via e-commerce platforms, retail shops, and supermarkets. Apart from the original salted flavour, the chips are available in peri peri, salt and black pepper, and sour cream onion and parsley flavours.

He explains that Beyond Snacks fixes deals with farmers right at the beginning of cultivation, so that the total harvest can be procured. “Over the past three months, 170 metric tonnes of bananas have been processed. Our stable rates are never less than the market value and won’t come down even if the latter falls. This heightens the confidence of farmers and total procurement helps them avoid wastage of produce in storage,” shares Manas, who is an MBA graduate.

A slow but steady path to success

In the trial run, Beyond Snacks products were placed in a few retail stores, from where repeated orders came in, Manas says. “Our smallest packet of 85 g was sold at a premium price of Rs 60 then. In local shops, it will be Rs 20-30. But people came back due to the standardisation and taste, which is exactly what we wanted.”

Beyond Snacks’ big break happened in 2019, when they attended a trade show in Thrissur. What started as a free sampling stall with just 12 boxes of chips packets ended up as a store that sold a truckload of the product. “We reached more stores after this event.”

Just as sales began gradually picking up, the coronavirus pandemic happened. Sales dropped, but Manas wasted no time in entering major e-commerce platforms, which later became the turning point. Within months, the product became a best-seller on Amazon and Flipkart. It is now available on Bigbasket, Jio Mart, India Mart, The Good Stuff, and other leading platforms.

“Right from the beginning, our target audience was non-Keralites. As calculated, today the majority of our customers are from cities like Bengaluru, Mumbai, Pune, Mysore and Delhi. Also, we have made our presence in the US, UAE, Qatar, Nepal and Mauritius. A sale worth Rs 1 crore is made every month, and the best part is having repeat customers,” says Manas.

Due to his interest in business, Manas was a regular viewer of Shark Tank USA, which gives budding entrepreneurs a platform to make business presentations to a panel of five investors or ‘sharks’, who decide whether to invest in that company or not. When he heard the news that this popular show is making its debut in India, Manas went ahead and applied without a second thought.

After four rounds of online interviews and an audition, he was selected. Manas came up with an interesting presentation to ask Rs 50 lakh in return of 2.5 per cent share in equity. Ashneer Grover, co-founder of Bharat Pe, and Aman Gupta, co-founder boAt Lifestyle, came on board for the same bid.

“It was a thrilling experience and turned into a large-scale free promotion for our brand. Both sharks are constantly in touch with me. It was through Ashneer’s contacts that we launched in Dubai. Aman is a great help in branding. Because of their support, our products are available in more than 3,500 outlets in Mumbai and Pune,” says the entrepreneur.

Beyond Snacks has recently launched a chips packet worth Rs 22 in order to reach more customers. They also sell combo packs of all flavours, as well as family packs of each flavour. “Our team is trying to introduce new flavours as well. Together, we are on a mission to give a global makeover to Kerala’s banana chips, and convert Beyond Snacks into a household brand,” he says.