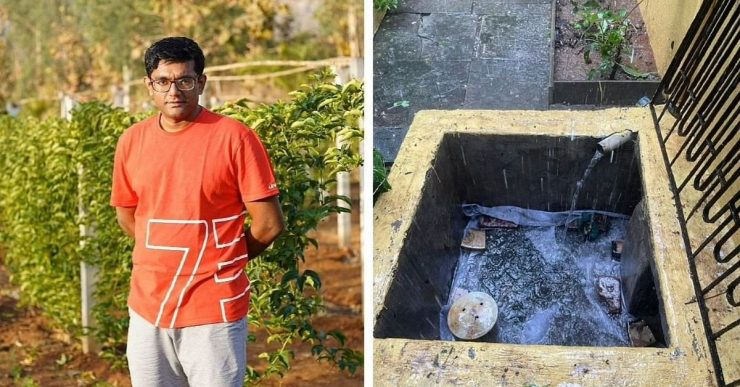 Mumbai- native Chetan Soorenji lives in an area where there was one borewell for three houses. With the passage of time, the number of houses increased, and so did the number of borewells. Initially, the depth of a borewell was 30 feet but soon it grew to 80-100 feet.

“Even the borewell in my house was 100 feet deep. But during summer, we faced water scarcity. The situation was similar to each of the residents in our area,” says Chetan, who is an employee with a multinational company.

“When the borewell was just 30 feet deep, the water tasted so good. But as the depth increased, the water started to taste saline. Also, the plumbing frequently got damaged due to the poor water quality. That was when we decided to do something about it,” he adds.

Chetan thought of many ways to solve this issue and ended up in installing a rainwater harvester and borewell recharging system.

His research about decreasing salinity of water led to the realisation that it can be controlled through rainwater harvesting and raising the groundwater levels through it. “My house is 50 years old, so the installation has to be done without making major alterations to the structure,” he says.

After a little juggling, he connected the roof of his house to the 30-feet deep borewell through a pipe, so that the rain water from the roof went straight into it. Apart from this, he also built a percolation pit, which collects the roof water in a pit. This pit helps recharge the groundwater level. He also connected the outlet pipe coming out of the air conditioner to this pit which transfers around 25-30 litres of water per day during summers. This water is filtered and used to recharge the borewell.

In addition to these hacks, he connected two pipes to the vacant land lying near his house so that the rainwater goes straight into the ground instead of the drain. “Since most of the water from our garden is used for recharging groundwater, the use of chemicals is completely prohibited, as we do not want any chemical residue to contaminate the groundwater reserves,” he says.

Except for setting up the pit, no major expenses were incurred for the installations. Chetan made use of items like pipes and fittings lying in his house to build them.

“Due to water shortage, the 30-feet deep borewell was rendered useless and we constructed a new one. But after installing the water harvester, even the old well was recharged and now has water throughout the year.”

He adds, “The problem of water salinity has also been solved. The groundwater recharging has benefitted not just my family but the neighbours too, where two of their borewells were replenished. We depend on the municipality for drinking water only. Rest of the needs are met by these two wells.”
Moreover, his initiatives have helped the nearby water springs which had run dry due to the heightened real estate development activity in the vicinity. “Today, we can see streams of crystal clear water flowing, like a small rivulet in our backyard now,” he adds.

In fact, his terrace looks like a mini forest with all the vines and plants. Passion fruit is the star attraction of this garden. “We started this while considering a natural and green sun shading for our building. The original motivation for this was to protect the top floor and the building from the harsh summer.”

Chetan believes that rain water is the best source of water and we must save it preciously. “If you can’t afford to spend much, then store the water flowing from your roof in a small tank. This is an easy but effective way of harvesting rain,” he shares.