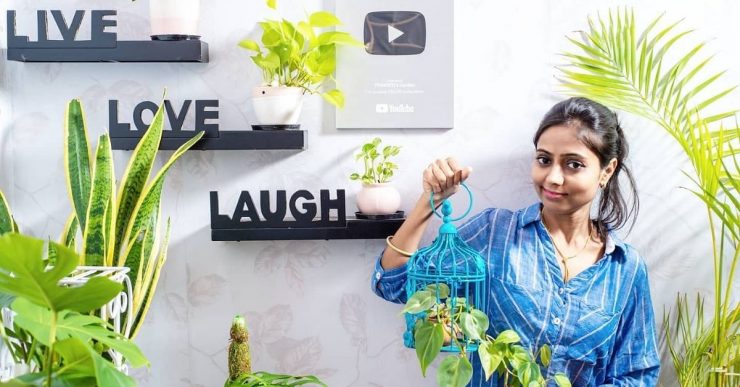 The start of Reshma Ranjan’s day is slightly different from the rest of us. Instead of a typical nine to five, this resident of Bokaro, Jharkhand, has her nursery to tend to, before she gets started with other chores.

What is astounding is that Reshma had a well-paying government job, which she left in order to dive into her passion for gardening full time. Her YouTube channel, which goes by the name ‘Prakriti’s Garden’, has lakhs of followers who borrow inspiration from her gardening tips and tricks.

A green thumb since childhood

It all began in her grandparents’ home in Bihar. Growing up, Reshma never had a dull day, as she was exposed to the wonders of the outside world and a plethora of plants. “My grandmother would share her knowledge about different crops, flowers, and plants,” says Reshma, adding that this knowledge passed down to her continues to help her even today.

And so, growing up in an environment that placed greenery above everything else, Reshma too has carried on the legacy. However, it wasn’t always her idea to be a full-time gardening enthusiast.

After studying biology in Class 12, Reshma moved to Agricultural Science at The Indian Council of Agricultural Resources (ICAR). Following this, she landed a job as agriculture coordinator and settled in Bokaro in 2015.

The job, she says, did not allow her to change or implement new things. “My job was to help the farmers, but they were not ready for any change. I was not very happy with my work and neither could I grow plants.”

Unable to use her knowledge of horticulture to usher in change, Reshma thought she would be better able to help if she shared her ideas with gardening enthusiasts like herself. She began working on setting up her YouTube channel, and gradually realised there were more people fond of gardening than she had estimated.

It was a simple video of growing a rose naturally that served as a milestone in the success of the channel. Her videos detailed helpful tips on different methods of growing flowers and fruits, and how to see them flourish and bloom over weeks and months, amassing millions of views. With this, brands started reaching out to her for promotions. And as the passion turned into a well-paying hobby, coupled with the love that she received from viewers, Reshma finally quit her job for good.

Today, if you walk into her home in Bokaro, you’ll be greeted by around 2,000 potted plants that she has tended over the years. Why pots, we ask. She says this allows her to take these plants with her wherever she may relocate next.

Tutorials on how to grow sponge gourd and avocado, or varieties that are not well-known, as well as shots of bonsais in their colourful bloom are just a few gems from Reshma’s collection. She says she is also open to experimenting with newer techniques of growing and flowering, and has tried grafting.

She says she is earning around Rs 1 lakh a month through YouTube and Facebook. “The most important thing for me is that today I am happy and able to help people to spread greenery.”

Read the story in Hindi here.