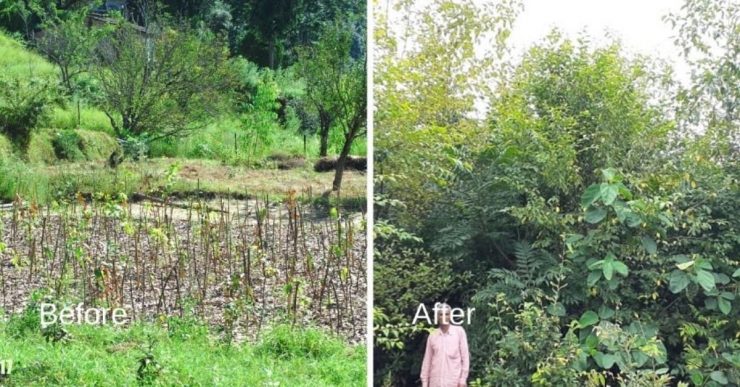 Lucknow-born Sheeba Sen was aware that while she had been raised with a certain amount of privilege as a child, not everyone had the same opportunities.

After graduation, she earned a scholarship to the UK, where she pursued international relations and law from Oxford University. Later, she worked as a corporate lawyer for three years in London. “I studied in prestigious institutions and received global exposure. But over the years, I began feeling like I had to protect the culture of my country and add value to it,” she tells The Better India.

“I was using my knowledge and skills to make rich people richer, and I wanted to make better use of my education and create a difference in society,” she says.

This solution came in the form of a unique revenue model that Sheeba has created, wherein villagers can plant trees on behalf of big corporations, while improving local biodiversity and kickstarting a regenerative economy. To kickstart this plan, she has planted over eight lakh trees across Uttarakhand, Maharashtra, Karnataka, Rajasthan, Gujarat and Madhya Pradesh. With her enterprise Alaap, Sheeb says the trees have helped sequester 4,40,000 tonnes of carbon to date.

In 2010, Sheeba moved to Mumbai and established a startup that worked in a ‘farm-to-cup’ supply chain for coffee. The initiative also presented her with the opportunity to interact with farmers from rural and remote parts across the country.

“I learned that these coffee planters were extremely poor and at the mercy of middlemen. The NGOs and other people’s efforts offered little help. The result was that they were stuck in an intergenerational poverty cycle,” she explains.

To make a difference at the grassroots, Sheeba continued her interactions with the rural populace and visited Nainital in Uttarakhand.

In 2011, she joined Aarohi, an NGO that works towards rural and grassroots development. “I designed and funded projects for effective transformation of the rural population. The experience gave me an exposure to organisation management, understanding funding, talent acquisition and other aspects of running an NGO,” she says.

She observed that the NGOs worked on a project basis rather than focussing on bettering the lives in rural areas. “They work on a philanthropy model which, even after spending crores, have not impacted the villagers in the long term,” she opines.

So she decided to take matters into her own hands, and help villagers create livelihood in the long term by planting trees.

In 2017, Sheeba planted 600 saplings on 200 square feet of land using the Miyawaki technique in Uttarakhand’s Satoli village. A year later, the trees flourished with a 92 per cent survival rate, and plants as high as 20 feet.

Basking in her newfound success, she decided to try and restore the ecosystem through forestation. She explains, “Climate change is affecting everyone across the globe. One of the ways to do so is planting trees, which enable carbon sequestration.”

“The villagers have land as assets, and I felt that if they used it from a restoration point of view, they could benefit while helping in improving the planet’s ecosystem,” she says.

In 2018, she decided to quit and establish Alaap to work for ecological restoration.

After seeking government support for funds under various schemes and convincing villagers, Sheeba started creating Miyawaki forests. “The same year, the NGO planted 25,000 native trees in Uttarakhand and Karnataka by partnering with local and state governments. The plantation of local varieties such as box berry, Indian almond, deodar, Banjh oak, and others was aimed at understanding forest growth in different regions,” she says. Her enterprise also collaborated with regional NGOs like Acacia Eco and Dharti Amrit to seek support.

“We mainly work on heavily degraded, barren, waste, and community-owned lands. Tracking the number of villagers is not a metric we calculate for our projects. But we centre our plantations around unemployed youth and women seasonally, which has benefitted over 250 persons to date,” she says.

Besides plantations, the NGO has set up seed banks and nurseries in an attempt to scale forests to millions within a decade.

But the Miyawaki technique involves dense plantations in a small area, preventing the villagers from accessing forest resources. “Reforestation alone would not suffice in transforming the region economically. I started exploring ideas of how restoration can become bankable using philanthropy grants,” she says, adding, “It includes insurance companies, bankers and other entities.”

She adds, “At present, the forestry model works where investors spend money to grow timber and chop them after 15 years, sharing the revenue earned with the owners. But the model degrades the environment and involves monoculture, which is unhealthy for the planet. I wanted to conceive a model where the money does not come at the cost of deforestation.”

Sheeba then devised a social enterprise model to unleash economic development in rural areas. “In Europe and other western countries, it is mandatory for polluting industries to offset carbon footprint. One way is to reduce the footprint. The other unavoidable offsets, such as in the case of electricity companies, have to mitigate carbon emissions by investing in projects of their choice,” she says.

She says the villagers in Uttarakhand have a solution for these corporations, and can help them by sequestering carbon by creating forests. The companies, in turn, can invest and pay the villagers.

“The change can only occur if the big boys like corporations put their commercial money in creating a business model to benefit the villagers. The companies are finding ways to set off their carbon footprint,” she adds.

She adds, “If the villagers plant trees on their land on behalf of the companies, it will help improve local biodiversity, address environmental concerns, and kickstart a regenerative economy. The villagers will benefit in multiple ways as they will receive income from the corporations via carbon credits and use the forest resources for livelihood and ensure a stable income through long term restoration projects.”

Sheeba says that such an economic model makes villagers the service providers, who avail fees. “They know the importance of forests more than their urban counterparts, and such attractive prospects presented before the villagers brought them together for the cause,” she says.

A win-win for all

“In 2020, we started designing projects to create million tree forests in a specific region. We need 100 acres to plant a million trees. Such large scale plantations will attract companies to invest and sequester carbon on a large scale,” Sheeba adds.

Alaap is working with California-based Hasten Ventures SPC, a social purpose corporation, for the cause, and is in discussion with a couple more.

Sheeba says, “Selling carbon credits is a way to finance nature-based projects, but it takes at least five years to create the carbon asset that has the potential to generate credits and be sold to carbon buyers, which are corporations in our case. They can pump capital into the projects in exchange for credits to achieve their climate targets.”

“Our next steps are to conduct carbon measurement studies and register these projects on the carbon markets,” Sheeba adds.

Pune-based environmental scientist, Pournima Agharkar, says several factors determine the quantity of carbon the forests can arrest. “Forests can absorb tonnes of carbon. But the ability to create a carbon sink by a forest is determined by the height of the trees, girth, biomass generated, density and even species. A significant amount of data is required to assess the same,” she says.

Sheeba hopes her initiative helps transform rural India. “I am to create forests with 100 million trees that will conserve environmental elements such soil, water, and air, and create employment for villagers and bring them out of drudgery,” she adds.