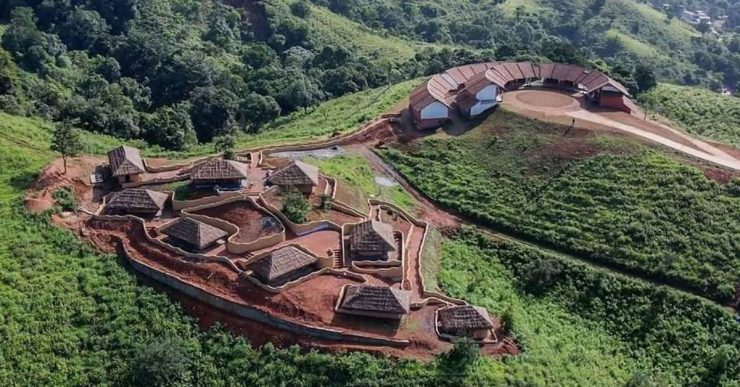 A recent tweet by Anand Mahindra, entrepreneur and chairman of Mahindra Group, will transport you to the lush green tea plantations of Vythiri in Wayanad, Kerala. The visuals are stunning — clear mornings, dewy tea leaves, and a beautiful blue sky.

Set up by the state, this is a ‘first-of-its-kind’ tribal heritage village called ‘En Ooru.’ This project was envisaged to showcase the rich heritage of the tribal community. Spread over 25 acres on the slope of a hillock, it will allow visitors a chance to experience tribal architecture and their indigenous lifestyle. While the seeds of this project were sown way back in 2010 by then Sub Collector Prasanth Nair, phase one of the project light got completed only in June 2022.

“This was an ambitious project kickstarted during my first posting as an IAS officer. As a young recruit, I was extremely excited when the project was approved by the government,” says Prasanth.

“It was designed as a cooperative entity with members from various local tribes. Twelve years later, it has become a transformational project that seeks to give the tribal community, who constitute about 17 per cent of the population in Wayanad, a share of the income from the booming tourism industry of Kerala.”

At this site, there is a tribal market, food outlets, a tribal emporium, an open-air theatre and a replica of a tribal colony. “Those employed at this site will be from the local tribal communities. This will also give them a chance to take their art and culture to the market,” adds Prasanth.

The project is seeing close to 6,000 visitors on the weekends, and about 2,000 on the weekdays.

Prasanth, who is currently posted as the Special Secretary in the Scheduled Tribes Development Department, is hopeful of replicating this model in several other states across India.

“It is heartening to see the response this place has been getting. With just a few weeks into operations, each shop within this hamlet has managed to have sales of over Rs 2,000 per day, and the restaurant has reported weekend sales of up to Rs 80,000,” an official says.

Watch the video shared by Anand Mahindra on the hamlet’s captivating beauty.

This is just beautiful. Kudos to ⁦⁦@KeralaTourism⁩ for this concept. The pristine architectural design of the village is stunning. Showcases how ‘simplicity’ can be stunning. pic.twitter.com/8Wf8CLgoZ2