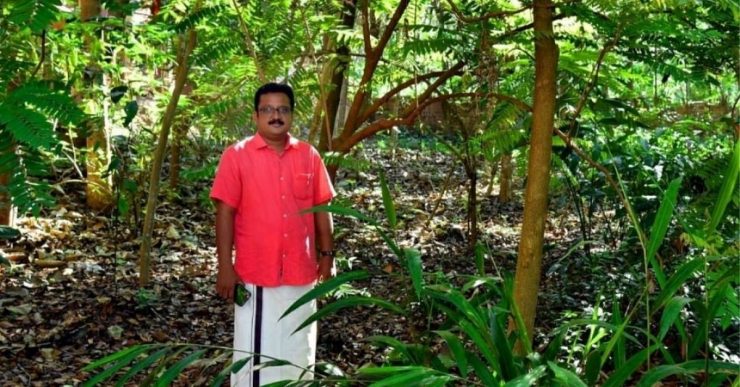 The students of Vignjana Vilasini Higher Secondary School (VVHSS), Thamarakulam in Alappuzha district of Kerala, have been learning the values of environmental conservation while being part of several green initiatives.

With the consistent effort of the students and the staff over several years, the school successfully set up a lush herbal garden as well as a Miyawaki model forest within the campus.

All thanks to Raphi Ramanath, a biology teacher at the school, the environmental activities at the school campus have already won several accolades from the government as well as from various organisations.

Raphi’s efforts can be traced back to over a decade ago when he took charge of the school’s Eco-club as its coordinator. “I joined the school in 2004 and became part of the Eco club in 2009. My responsibility was to create awareness among the children on the importance of the environment and nature conservation. The aim was to conduct activities within the school to inculcate a kind of responsibility in the budding generation by encouraging them to involve in different green initiatives,” Raphi tells The Better India.

“In the same year, I suggested the idea of setting up a herbal garden within the campus and our management gave the permission to utilise around 30 cents of land for the same. Now the garden houses over 150 varieties of medicinal plants in it,” he says.

The 13-year-old herbal garden has been maintained by the students and the staff equally, says Raphi. “We started the herbal garden with the help of the forest department and they provided us with 50 saplings. We kept on planting more and now the herbal garden has grown so much that they are not plants anymore but full-grown trees,” he adds with a smile.

Throughout the years, he says that different batches of students have been the guardians of this herbal garden. “Our students were involved in activities right from planting the saplings to watering them regularly. Back then, my students and I used to carry water in buckets and water the plants. But now we have all the facilities to irrigate the garden,” says the 41-year-old.

“Neermaruthu (Arjun tree), Ashoka tree, Neem, Danthapala (Sweet Indrajao), sarpagandha (Indian snakeroot) are a few members in the herbal garden. Sometimes people approach us asking for the leaves of certain herbs, we let them take it from the garden as we don’t have such restrictions,” he adds.

Even though Raphi is not anymore the coordinator of the Eco club, he has been constantly working to increase the green cover in the school campus.

Apart from herbal gardens, under his initiative, the school has also set up a mini-forest by adapting the Japanese Miyawaki method. Raphi narrates, “The Miyawaki forest was set up in September 2021 in 5 cents of land within the campus. This initiative was also done in collaboration with the forest department, where they provided us with the saplings. They also built us a fence surrounding the mini-forest. The forest named ‘Vidyavanam’ now has over 450 trees of 112 varieties.”

“There are several fruit trees like mango, jackfruit, etc. as well as several special trees like Yellow Bauhinia. These trees also attract butterflies,” he adds.

However, the pandemic has been a difficult period, says Raphi, as children were not able to spend much time at school. “So, I used to water the tree saplings once every three days. The school management has also helped us set up a drip irrigation facility for the mini-forest. But as it might not suffice all the 450 trees, I water them again,” he says.

Gigy Nair, principal of the school, adds, “Raphi has been a constant presence in all our green initiatives. From gardens to the Miyawaki forest, his initiatives have been helping our students gain hands-on experience at conservation and help them imbibe environmental values.”

A teacher with a green mission

Setting up a herbal garden was just the beginning for Raphi who later embarked on a mission to increase green cover in Alappuzha and even beyond.

“I wasn’t into conservation before I became part of the school’s Eco-club. I didn’t expect that my first initiative of setting up a herbal garden in school would be this successful. It motivated me to do more in terms of conservation. So, I started taking up initiatives like plantation drives in Alappuzha and in different districts,” says Raphi who became the Alappuzha district coordinator for an NGO (environmental organisation) in 2013.

The NGO which aimed at increasing the green cover by planting trees extensively provided Raphi with a canvas to paint it green. “As part of the NGO, with my initiative, we planted over 1 lakh trees across Alappuzha district. We used to plant trees or conduct plantation drives for free and the NGO provided us with the saplings. We also set up a nursery, as part of the NGO, for over a year and produced around 2 lakh saplings and distributed them for free. Later in 2016, I became the State coordinator for the same organisation,” says Raphi who continued his work with the NGO till 2018.

Even though he is no longer part of the NGO, several people and organisations still approach him for advice on planting trees or for conducting plantation drives. “So, whenever somebody approaches me to plant trees, I make sure that they are genuine. I only give out the saplings or help them with drives only after a background check,” says Raphi.

He adds, “The forest department has been very helpful, providing me with saplings. Also, I have a few friends who own plant nurseries and through them, I have been sourcing saplings at a lesser price.”

Over the years Raphi says, he has helped set up several herbal, fruit gardens, butterfly gardens and nakshatra vanam (planting trees named after stars in the Malayalam calendar) in several schools, government offices, places of worship and so on. For his green initiatives, Raphi has also received several accolades from the government. In 2015, he won the best conservationist award from the Kerala State Biodiversity Board and recently, the Kerala Forest and Wildlife Department honoured him with the Vanamitra award for his efforts at conservation.

About his future ventures, he says, “Right now, my focus is only on the Miyawaki forest as it requires good care at this stage. Our students are unable to be around the plants due to the pandemic. Now we are waiting for the school to open so that kids can also take part in these activities.”