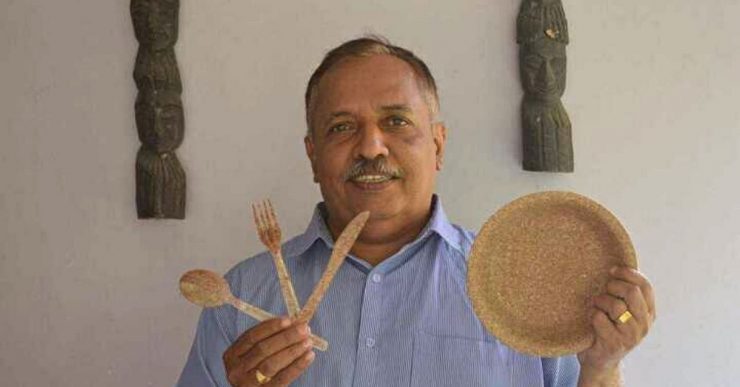 Hard work is the greatest thrill in Ernakulam-native Vinayakumar Balakrishnan’s life. In the past 55 years, Vinayakumar has tried his luck in many fields such as geology, human resource management, banking and insurance. He was successful in each of them and was always on the lookout to venture into more fields.

And so, it was during a trip to Poland that he came across a company that manufactures edible tableware. He was instantly impressed and decided to give it a shot after returning to his homeland in Kerala. Vinayakumar’s wife Indira also joined in the venture, which they named ‘Thooshan’, derived from thooshanila or banana leaf used to serve traditional Kerala sadya.

“I was certain that both of us couldn’t get into this business as we had no prior experience. We wanted a credible partner and approached the Council of Scientific & Industrial Research (CSIR)’s National Institute for Interdisciplinary Science and Technology (NIIST) in Thiruvananthapuram. The machinery, completely made in India, was completed within 1.5 years. But it took us a few more months to figure out the work. Now, at the factory in Angamaly, we produce more than 1,000 plates daily,” says the founder of Thooshan, which was founded in 2018.

The major raw material involved in the manufacturing process is wheat bran, which is a discarded agricultural by-product. Vinayakumar sources the material from farmers, inside and outside of Kerala. “Around 7,000 tonnes of waste is produced after harvesting and processing crops in Kerala alone. A portion of this goes as cattle fodder. Processing them into plates and containers can minimise the use of single-use plastic, especially at events,” explains Vinayakumar.

He adds that since the products are used for serving food, they are manufactured in sterile conditions in machines. Apart from plates made of wheat bran, Thooshan also produces edible straws using rice. Leftover rice particles from the mills of Andhra Pradesh are used in the making. He asserts, “Both plates and straws can remain intact for up to one hour. Don’t hesitate to pour extra rasam or sip more juice. There won’t be any mess till you complete the meal. The products are microwavable too.”

There are two variations in the plate category – dinner and sides. The former is wider while the latter is smaller. The price of products ranges from Rs 3 to Rs 20. “We are planning to introduce containers, bowls and other cutleries too,” says Vinayakumar. Apart from plates and spoons the brand also sells biodegradable carry bags made of corn starch that have a shelf-life of six months.

The major customers of Thooshan are event management groups and individuals who thrive on sustainability. As of now, the company has dealers in 10 districts of Kerala. They have also entered the wholesale and retail business. “We are all set to launch the brand on Amazon, probably next week,” says Indira, who also worked in the banking sector.

The couple used to work in the same bank before their sojourn to Mauritius. Vinayakumar was offered the position of CEO of an insurance company in Mauritius. He says, “People might wonder why I left a well-paying job to start this unconventional business. But I feel like fulfilling a social responsibility through this brand, which gives me a level of satisfaction that no other corporate job can provide. This is my little part to save our dying planet.”

Vinayakumar lists the following advantages of his brand’s tableware:

If you are keen on buying Thooshan’s tableware, visit their website or write to vinay@thooshan.com.