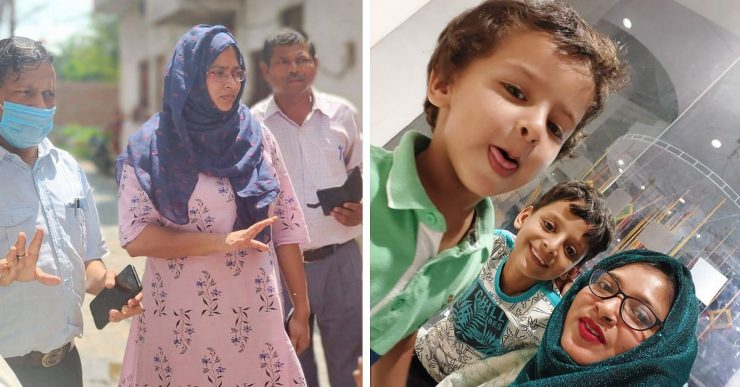 What is incredible about Dr Bushara Bano is that she never let go of her dream. After marriage, she attempted the Union Public Service Commission’s (UPSC) Civil Service Examination (CSE) four times.

“There should be no caps on pursuing your dreams. Marriage and children should also not be deterrents,” Dr Bushara tells The Better India.

In 2016, two years after marriage, Dr Bushara decided that she wanted to attempt the CSE. “We were in Saudi Arabia, where I was employed as an assistant professor. I took the decision to quit my job after a lot of deliberation. I was certain I wanted to come back to India and serve my own people,” she says.

Both Dr Bushara and her husband resigned from their lucrative jobs in Saudi and moved back to India the same year.

She appeared for the CSE for the first time in 2017. “I did not clear the prelims. However, that proved to be a great training ground for the exam in 2018. By this time, I had also delivered my first child, and was carrying my second when I appeared for the 2018 mains and interview round,” she says.

Juggling a full-time job, a baby, pregnancy and preparation

Born and brought up in Uttar Pradesh’s Kannauj’s district, Dr Bushara describes her upbringing as ‘middle class’, where even her great grandfather was part of the Indian Police and served as an SP. “Those were some of the early influences. I nurtured that dream of wanting to be part of the administration system really early on in life,” she says.

Dr Bushara says that while life in Saudi was good, there was always an itch to return. “I did not want my academics and hard work to not benefit my own country. Despite being told by many people that we could live the ‘good life’ in Saudi Arabia, we chose to come back and work here.”

Talking about how she juggled a full-time job, a toddler at home, and a pregnancy while squeezing in time to study, she says, “It was difficult, there is no denying that. However, it helps in the long run if you plan your time and ensure you complete all set tasks for the day.”

Sometimes, despite all the hard work one puts in, the result is not favourable. This is what Dr Bushara experienced in her first attempt in 2017. “A day before the prelims, someone close to the family passed away. The news kept me up all night. It was not easy for me to process that and appear for the examination the very next morning. In spite of that. I lost out by only .75 marks.”

With double the hard work, she approached the next year’s paper.

‘Use your strengths to your advantage’

Dr Bushara says that she has never been one to put in 10 to 12 hours of study time. “I have always been a sharp learner and used that to my advantage. I would wake up and start studying at 6 am, spending almost three solid hours with my books each morning. I’d also study during my free time at work. After returning home, I would get done with daily chores, and sit again from 8 pm to 11 pm,” she says.

This routine allowed her to spend close to six to seven hours preparing, She says this is more than sufficient if the quality of preparation is good. “You must ensure you’re not wasting time during these six-seven hours. This time is crucial for the long run,” she adds.

“Staying focused and clear headed are important attributes for aspirants. Do not let anything or any situation bog you down — whether it is the paucity of time or the fact that you are not enrolled in a coaching class. Whatever you manage to study, do it thoroughly and well enough to attempt the paper. This should be applicable to every aspect of life, not just to those appearing for the UPSC,” she says.

“Do not allow your ambitions to be thwarted by the things that society tells you. You are your own master and should be able to write your own story as well. Marriage and children should never be treated as impediments to reach your goal. If your goal is set, then just focus on achieving it,” she says emphatically.

“The information available online is so vast that it’s very easy to get lost. While researching on a particular topic, always stay focused on what you need to learn and understand. Stay away from meandering online and get stuck in a situation of information overload,” she says.

2. Make notes that you can relate to:

“The notes you make must serve their purpose. Do not try and copy someone else’s technique while making notes. Write in a way that you can understand best, and use these to prepare and revise before the examination. Use NCERT’s well while preparing,” she adds.

3. Focus on quality not quantity:

“Rather than studying one topic from ten different resource materials, focus on using one or two materials, but studying them thoroughly. Spend time and energy on revising the topic. Focus on the syllabus while preparing,” she says.