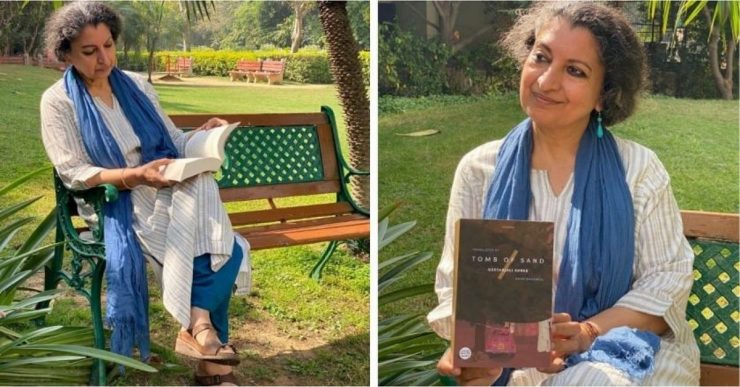 Delhi-based writer Geetanjali Shree’s 2019 novel Ret Samadhi has created history by becoming the first Hindi work of fiction to be longlisted for the Booker Prize. Translated into English by Daisy Rockwell, ‘Tomb of Sand’ will be available for purchase in India soon.

Geetanjali’s work is highly praised and the judges describe it as ‘an urgent yet engaging protest against the destructive impact of borders, whether between religions, countries, or genders.’ If Geetanjali’s work clinches the title, she will be awarded GBP 50,000, which will be split evenly between the author and translator.

Set in northern India, ‘Tomb of Sand’ chronicles the life of an 80-year-old woman who slips into a deep depression after the death of her husband and then resurfaces to gain a new lease on life.

In a sense, the story is about second-innings. Geetanjali’s writing is often described as deeply introspective and this book offers that in abundance.

In this exclusive interview with Geetanjali Shree, she speaks about her writing journey, early influences and shares her excitement at being longlisted.

Born in Mainpuri, Uttar Pradesh, Geetanjali has three novels (Mai, Hamara Shahar Us Baras and Tirohit) published so far and several short stories to her credit. Her writings have been translated into English, French, German, Serbian, and Korean.

Speaking to The Better India, Geetanjali says, “There was no one moment or any dramatic situation that led me to become a writer. It was the sheer desire to express myself that found me putting pen to paper. For me, the medium of writing worked the best.” Geetanjali grew up amidst literature and recalls her early influences.

‘I was raised at a time when the reading culture was very high.’

“My father, who was a bureaucrat, was also a writer and there was always that atmosphere around the house. I grew up at a time when there was idealism about ‘new India’. I grew up in Allahabad and had the chance to interact with many of the well-known writers of that time. Sumitranandan Pant, Firaq Gorakhpuri, Mahadevi Verma and so many more prolific Hindi writers,” she says.

Therefore, Geetanjali was always surrounded by books, literature and general awareness about the literary world.

“While there were a few other sources of entertainment whilst I was growing up, reading was always up there on the list. There were all kinds of literature available – serious, not-so-serious, and even just as a medium of entertainment,” she says. Now with an influx of so many other ways of staying entertained, literature has become just one amongst the many. “What’s missing today is a sort of thehraav (a certain kind of quiet) that allows one to just unfurl and stay with their thoughts,” she says.

Speaking about some of the things that she misses, she says, “I cannot seem to catch a good sunrise or sunset – I am surrounded by big tall buildings on all sides. While I am grateful for the shelter, I do miss what I grew up enjoying.”

‘Writing is a reward in itself.’

“When I started writing, I was very diligent. I would start my work at 9.30 am and would try and sit with the writing until almost 5.00 pm. This does not necessarily mean I was writing every day, but I was in that space that allowed me to think and process at my own pace,” she explains. Geetanjali would also, within this time, read and immerse herself in the works of other authors.

While she was able to stick to his routine for a long while, she says once her work was published it started to get difficult. “I was introduced to the world of events and meetings. There were literary festivals I was attending and while all that was great, it did change my routine a bit. I started taking many more breaks,” she says.

Asked about writing she says, “The unpredictability of it is interesting. It is not like I have it all worked out when I write the first word. I am embarking on a journey when I write that first sentence. It is always like a voyage into the unknown. I begin with a seed image/dialogue/idea and from there it takes on a life of its own.”

This journey of discovery is something that Geetanjali finds thrilling.

In the same breath, she says that writing can also be scary in a way that it induces thrill. “You are taking a risk as you go along. Unless you want to be cautious and tread along the beaten path, in which case you needn’t be scared. However, I’m not sure what discoveries you might make along the way and that will not generate any interest for yourself.”

On working with Daisy, the translator for this work, Geetanjali says, “While we were introduced via e-mail and I have never met Daisy physically, it has been a smooth working relationship with her. I found her to understand my idiosyncrasies very well and tune into them. We had many discussions, some that resulted in agreements and some in disagreements, and the work is now before you.”

And her mother, a very jubilant 95-year-old, says, “Geetanjali’s writing will make you feel comfortable. There is a sort of thehraav (a certain kind of quiet) in her words. She writes with a sense of ease and can bring out the mundane and routine everyday life so beautifully in her writing.”

Asked how she feels about her daughter being nominated for the Booker, she smiles, catches her breath and says, “She is my daughter, of course, I will be happy and proud. For me, she is already a winner.”

Click here* to order your copy of Tomb of Sand today!

*This is an affiliate link. If you purchase something using this link, The Better India will get a small commission.