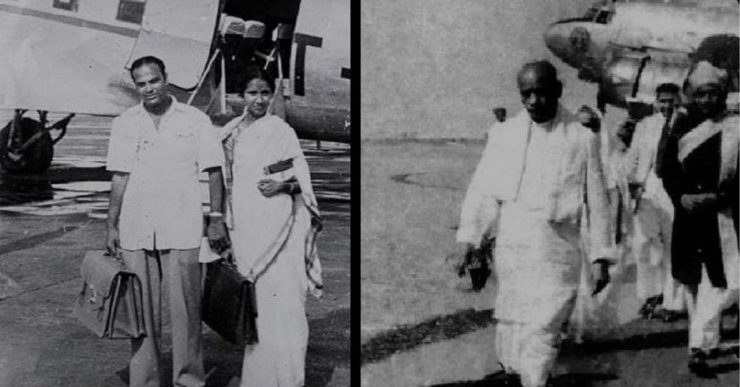 The de Havilland Dove, a British short-haul airliner, is considered one of Britain’s most successful postwar civil designs. In and around 1946, it was noted for its modernity and load-carrying capacity, safe engine-failure performance, and easily interchangeable and removable parts. At the time, it was nothing short of an aviation marvel.

In 1950, the Government of Madras approached a couple to purchase one model for the state. For this, the duo travelled to England by ship and purchased a brand new de Havilland Dove. The following year, they co-piloted the aircraft from London to Bombay via Paris, Karachi and Baghdad. The journey was completed within 27 hours, setting a world record for an England to India flight on a piston-engined Dove. The record remains unbroken till today.

When the illustrious couple, Usha Sundaram and her husband V Sundaram, were not setting world records, they were busy being trusted co-pilots of several Indian dignitaries. While V Sundaram had been a pilot since the age of 19, Usha expressed her desire to fly shortly after they were married. When the duo set the world record in ‘51, she was only 22 years old.

“My mother took to the skies at a young age, soon after she married my father in July 1941,” Suresh Sundaram, the couple’s eldest son, told the Times of India. “He was an accomplished pilot who was an instructor at the Madras Flying Club. Those days, co-pilot licensing wasn’t very stringent. So my mother took the co-pilot’s seat on my father’s flights when he often flew airmail across India and to Ceylon from Madras.”

Usha thus holds the title of being the first woman to fly Indian skies after the nation became independent. Today, Indian women pilots comprise 15 per cent of the nation’s aviation industry, while the global average stands only at 5 per cent. But back then, a woman’s entry into the cockpit was an anomaly.

In 1946, Usha and V Sundaram shifted to Bangalore, where the latter became the Director of Civil Aviation for the State of Mysore. A few years later, he was appointed the principal of the Government Flying Training School (GFTS) in Jakkur, which had been set up in 1948. In ’49, Usha became the first student, and thus, woman, to pass out from the academy.

The duo was chosen as the personal pilots of the Maharaja of Mysore’s plane, the Dakota DC-3. Among the many passengers they ferried were Pandit Jawaharlal Nehru and Sardar Patel.

In particular, the Sundarams were an integral part of Patel’s historic mission of the unification of India’s princely states. The duo often co-piloted the deputy prime minister’s flights across India and Pakistan while he negotiated with the states. Usha, then in her 20s, would soon become a close friend of the politician.

Chinny Krishna, Usha’s youngest son, said, “Leaders of the freedom struggle, like Nehru and Patel, preferred to fly with my parents on the Mysore Maharaja’s private jet, as it had an all-Indian crew, unlike other carriers at the time, which primarily had American and British members.” Other dignitaries of the dynamic duo included president Rajendra Prasad and minister for education Abul Kalam Azad.

Usha also achieved the marvellous feat of ferrying people stranded in Pakistan after Partition, despite the tense environment in the sub-continent at the time. She took these trips on many occasions, safely bringing Indian citizens back home.

She expertly commandeered flights even in inclement weather, embarking on rescue missions that required travel at low altitudes, since cabin pressurisation was unreliable at the time. Even as her husband took a back seat for a while to focus on the airline business, she commandeered Nehru and other dignitaries alone, leaving Rajendra Prasad in particular thoroughly impressed.

In 1952, Usha took early retirement from professional flying to care for her three children. She and her husband would continue flying recreationally till his death. In their lifetime, they also set up Blue Cross India in 1959, an animal welfare organisation headquartered in Chennai, which became one of India’s largest such organisations.

In 2001, addressing a media interaction in Bengaluru, Usha recounted her flying days and said, “There should be no gender bias in the field of aviation. A woman’s ability with aircraft is at par with a man’s.”