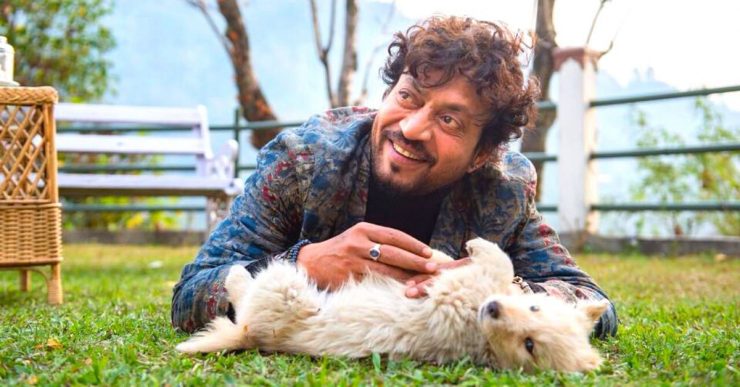 Nearly a decade before Irrfan Khan made his mark on mainstream Hindi cinema with his visceral performance as Ranvijay Singh, a violent student leader in Tigmanshu Dhulia’s Haasil (2003), he starred in a gay romance film which never saw the light of day. It was banned by the Central Board of Film Certification (CBFC or popularly known as the Indian censor board) for its homosexual overtones. The censor board didn’t approve of homosexual romance in 1995.
(Image above of Irrfan Khan in the film ‘Qarib Qarib Singlle’ courtesy Facebook/Irrfan Khan)

Ironically called ‘Adhura’ (meaning ‘incomplete’), the 1995 movie starring art dealer and gallerist Ashish Balram Nagpal, Irrfan Khan and Kity Gidwani, could have probably broken new ground in how queer identities were represented in mainstream Hindi cinema. Until Adhura was made, queer identities were stereotyped in the most jarring manner through flamboyant and effeminate caricatures often wearing ghastly makeup and characters depicted as criminals.

Adhura, on the other hand, a film directed by Sunil R Prasad was about a passionate homosexual relationship between an industrialist and a newspaper editor, according to a 1995 Indian Today report. Although both men are in love, Irrfan’s character (the editor) decides to remain in the closet and takes a wife, played by Kitu Gidwani. Reports indicate that in the film, this passionate relationship between the two men turns sour and results in a tragedy.

The film had the potential to be one step ahead of the typical caricatured portryal of homosexuals given the mainstream occupation of the characters. There were exceptions later in the decade like Tamanna (1997) directed by Mahesh Bhatt which features a story about Tikoo (Paresh Rawal), a trans person, abandoned by their mother. Despite box office failure, it won a National Award for Best Film on Other Social Issues (1998).

In a 2007 interview with journalist Upala KBR, Irrfan said candidly that he would have no reservations about playing queer roles. When discussing some of the ‘intimate scenes’ he shot with Ashish Nagpal on the set of Adhura, he expressed no discomfort.

“If Ashish had a crush on me, he expressed it in the most intimate way in the film! Adhura was made for TV audiences, but I don’t know why it never get[s] released,” he said. While reports pegged Adhura as a 90-minute movie, writer Andrew Grossman claims in his book ‘Queer Asian Cinema: Shadows in the Shade’ (2000) that it was made as a pilot for a television series.

The shelving of the film, however, didn’t deter Irrfan from playing queer characters down the line. In Mira Nair’s short film Migration, there is even a scene where Abhay (Irrfan Khan) confronts Imran (Arjun Mathur) after the former catches him with someone else. Imran responds by shouting at Abhay telling him to mind his own business and that this was his life. This was a more mature portrayal of a queer relationship dealing with the same issues of fidelity as a heteronormative one.

“I don’t think it’s detrimental to my career to play such roles. We are not laughing at gay people in the film. Mira’s film is about creating awareness about HIV/AIDS, so I don’t care about my image or what people will say,” said Irrfan.

But then again, films like Migration (2008), My Brother Nikhil (2005) and the likes often framed homosexual relationships within the larger discourse of HIV/AIDS. These films were probably made with the right intention of spreading greater awareness about this life threatening condition and showing greater empathy to members of the queer community struggling with it.

However, queer relationships are much more than a launching pad for wider discussions on HIV/AIDS. They deserve to be captured for all their complexities like how certain forms of mainstream cinema does for heternormative relationships. You had short films like Riyad Wadia’s Bomgay (1996) which featured a steamy sex scene between characters played by Rahul Bose and Kushal Punjabi in a library without making any apologies for it.

But the one film which made it to the theatres was Deepa Mehta’s Fire. It was probably the first serious portrayal of a queer relationship between two lesbians. Starring the incomparable Shabana Azmi and Nandita Das, the film was reportedly passed uncut in May 1998 with an ‘Adult’ rating.

When released in theatres, however, it created a massive controversy with conservative mobs burning posters, vandalising theatres and shouting slogans. Despite the public ire, it received a real vote of solidarity from the queer community and eventually the government of the day.

Another gem is the recently released Queer Parivar (2022), a short film that was screened at the KASHISH Mumbai Queer International Film Festival this year. Shiva Raichandani, who has directed the film and acted in the lead role, portrays queer grandparents and the narative of multi-generational LGBTQ+ idenitities beautifully in the midst of an ongoing Indian-style wedding.

However, it’s important to ask whether mainstream Hindi cinema/popular culture has done a better job of portraying queer relationships post the Delhi High Court’s judgement striking down Section 377 and the greater ‘mainstreaming’ of queer identities that followed.

Would Adhura have received the approval of the Indian censor board today? We don’t know the answer to that question, but given the circumstances with the striking down of Section 377 of the Indian Penal Code by the Supreme Court and a more mainstream acceptance of LGBTQ+ identities, maybe it would have passed the censor board’s muster.

As we celebrate Pride Month, it’s important for mainstream Hindi cinema/popular culture to do a mature job of mainstreaming queer relationships. Maybe, if the makers of ‘Adhura’ decided to bring it back from the dead, we could usher in an era of wholesome LGBTQ+ films on the silver screen.