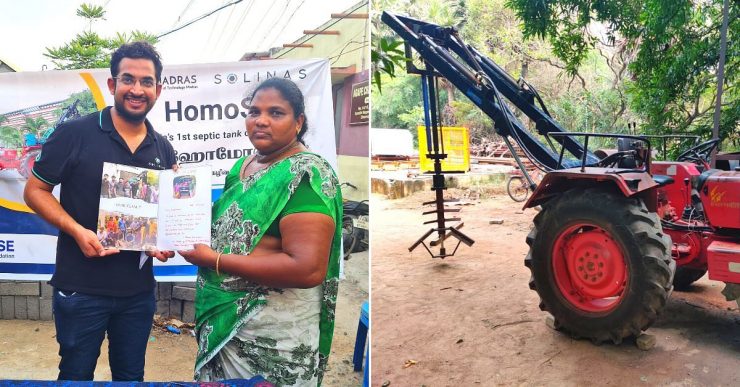 HomoSEP, a robot to eliminate the practice of manual scavenging in India, developed by researchers at the Indian Institute of Technology, Madras, is all set for field deployment.

Plans are afoot to deploy 10 units across Tamil Nadu with researchers already establishing contact with sanitation workers to identify locations. According to a press release issued by IIT-M today, Gujarat and Maharashtra are also being considered for deployment.

This robot has been developed over the last several years by a team led by Professor Prabhu Rajagopal, Centre for Nondestructive Evaluation, IIT-M, faculty at the department of mechanical engineering and IIT-Madras-incubated startup Solinas Integrity Private Limited. The team has been in close touch with sanitation workers. Support for this team has come from the Safai Karamchari Andolan (SKA), an NGO dedicated to the elimination of manual scavenging, along with CSR partners—GAIL Foundation, CapGemini, NSE Foundation and L&T Technology Foundation

In late May 2022, the first two HomoSEP units were distributed to two women — Nagamma and Ruth Mary, whose husbands died tragically during sanitation work — through the support of SKA.

“It was an emotional moment for us when we gave these machines to them. We met them almost four years ago at the start of this project. Now, we are working on an innovative model whereby we will supply these machines to SHGs established by communities impacted by the tragic consequences of manual scavenging. At present, Nagamma and Ruth Mary are respectively registering their own SHGs. With the help of these machines, they will be able to generate revenue by performing the septic tank homogenisation operations,” says Professor Rajagopal, principal investigator of the project, in a conversation with The Better India.

There is a deeply personal angle to this innovation. In 2007, soon after her marriage, Nagamma’s husband Y Kanniah died after he was sent out for a septic tank cleaning job in the Tambaram area of Chennai. The morning after Kanniah left for the job, she got the news of his death, even though he was perfectly fine the night before.

“Despite the enormity of such a tragedy, she had to pull herself up for the sake of a child working as domestic help and volunteering with other social organisations. When we gave this machine to her, she couldn’t contain herself. She told us, ‘If this machine was available then, perhaps my husband would still be alive today.’ Our hope is that she will soon become a proprietor of this SHG and generate a livelihood through this activity,” says Prof. Rajagopal.

Similarly, according to a Times of India report, Ruth Mary’s husband M Moses died on the eve of Christmas in 2011 after he entered a septic tank in Tiruvottiyur to clean it. He wanted to make some money to buy new clothes for his wife and three children for Christmas. Tragically, however, he died of suffocation in the septic tank. Devastated by his death, Mary vowed never to take up any work that involves sweeping, desilting, or manual scavenging.

Instead, she started a petty grocery story in the slum where she lived and has been running it ever since. Today, she owns the machine and will run a SHG which will operate it.

Dr Deepthi Sukumar, national core team member of SKA, said, “This is history in the making. Nagamma, a widow of a person who died in a septic tank, has now become the owner and an entrepreneur of mechanised septic tank cleaning services. With the support of SKA, Nagamma is initiating the ‘Safai Karmachari Enterprises’ comprising members who are former septic tank cleaners and family members of persons who were killed in manual scavenging. This enterprise will focus on changing the lives of safai karmachari communities with dignified livelihoods providing mechanised sanitation solutions to stop manual scavenging deaths and will engage with IIT Madras for their technical expertise and support.”

The practice of manual scavenging is banned under the Prohibition of Employment as Manual Scavengers and their Rehabilitation Act, 2013. Even though this deeply casteist practice was first banned in 1993, many activists continue to document how it still prevails despite attempts by the Central government to obfuscate data regarding the number of deaths associated with it, and civic and state authorities not acknowledging the issue exists.

Sanitation workers and unions representing them have always stated unequivocally that private contractors and municipal bodies continue to follow the dangerous practice of asking workers to enter storm water drains, sewer lines and septic tanks to clean them, often without safety gear.

In the press release, Prof Prabhu said, “The septic tank is a poisonous environment, filled with semi-solid and semi-fluid human faecal material that make up about two-thirds of the tank. Hundreds of deaths are reported every year across India, due to manual scavenging in Septic Tanks despite bans and prohibitory orders. The HomoSEP project is unique for the way it has brought together the key stakeholders, including university (our team), NGO, industry CSR and start-up to develop a solution to an urgent and pressing social problem. The problem is large and complex, and we hope that our effort serves as an inspiration for others to join in the push.”

HomoSEP was first developed as a final year Masters’ project by Divanshu Kumar under the guidance of Prof. Rajagopal. It was showcased at the IIT Madras Carbon Zerp Challenge 2019, after receiving seed support from IIT Madras’ Socially Relevant Projects initiative.

Despite the pandemic-related difficulties over the next couple of years, the researchers collaborated with Solinas Integrity Private Limited (now headed by Divanshu Kumar) to further develop HomoSEP.

How does it work?

The HomoSEP Robot can homogenise the hard sludge in septic tanks through custom-developed rotary blade mechanism and pump the tank slurry using an integrated suction mechanism.

The press release states, “Sanitation workers will be able to operate the HomoSEP on their own, after being provided with the relevant training and appropriate guidance along with necessary safety measures, both of which our team is working on right now. Safety plays a vital role in this whole procedure, starting with the design of HomoSEP itself.”

Speaking to The Better India, Prof Rajagopal says, “We built this device based on years of research, active inputs from the Safai Karamcharis, and SKA. We have built this machine based on inputs from workers on the ground, Dr Deepti Sukumar, zonal coordinator, SKA, and Samuel Velankani, state convener of SKA.”

The design goals of the HomoSEP Robot are clear. It should be easy to operate and intrinsically safe because the septic tank environment is poisonous and hazardous with inflammable gases. Also, the machine is also modular, which means you can keep adding elements to it. At the heart of it is a set of blades, which is now patent protected, according to Prof. Rajagopal.

“In the last couple of years, we organised some simulations, following which we came up with this dual-blade design. These blades normally retract like an umbrella. With this machine, however, the blades will open up like an umbrella inwards into the tank. We lower this machine into the manhole, which opens into the tank and then the multiple blades kick in. We are able to rotate these blades with the help of power from a prime mover. Currently, that prime mover is a tractor so that we can reach remote locations. But it doesn’t have to be a tractor. It can be a two-wheeler as well. We are working on a trolley-version of the HomoSEP. The power comes from the prime mover while these blades can be controlled with the help of the pedals and other such contraptions available in a tractor or a bike,” explains Professor Rajagopal.

The speed, height, and extent of retraction can be controlled by these pedals. Once the homogenisation process is done, researchers have devised some simple ways of checking whether it’s done without any direct human intervention. The machine can suck the content of the septic tank out with a suction system. Going further, researchers are also working towards integrating a tank into this machine so that they can provide an end to end solution tool.

“Earlier we had developed a very similar SEPoy Robot, which could be sent inside the septic tank, gives us a view of the contents inside, where there are breaches and tree root penetrations, etc. But when we took this machine to Safai Karamcharis in 2018-19, they felt that we needed something more heavy duty just to homogenise the contents,” he adds.

Explaining matters further, Bhavesh Narayani, the product lead at Solinas Integrity, which is the startup partner of this entire endeavour to end manual scavenging, said, “Our joint team made some significant innovations to the first proof-of-concept model. We improved the blade design through extensive simulation and mock-up trials and achieved miniaturisation for better portability.”

“The path from a laboratory product to deploying a robot in a real septic tank field is fraught with difficulties. Our team spent many sleepless nights, designing a solution keeping in mind the safety of the Safai Karamcharis. As a result of the dedication and hard work of our committed and motivated team of engineers, fabricators, and technicians, we are able to reach this milestone. Our team is conducting frequent training and safety sessions with the Safai Karamcharis on functionalities and operation of the HomoSEP robot. We believe that working together, we can eliminate manual scavenging from septic tanks,” added Bhavesh.

This path-breaking project was supported first by several CSR donors over the years, starting with WIN Foundation in 2019 for initial prototype development. Between 2019-20, GAIL (India) supported further product development and CapGemini supported efforts towards miniaturisation and portability of the robot, through their CSR initiatives. Over the last year, NSE Foundation and L&T Technology Services Foundation have commissioned the fabrication and distribution of 10 HomoSEP robots respectively, again through CSR support.

“After distributing the first two, we are working on the other eight units. Another two will go to a registered SHG based out of North Chennai, which has about 20 members. We are identifying more such recipients. Our goal is to give these machines to members of the affected safai karamchari community instead of third parties,” says Professor Rajagopal.

For the most part, IIT-M’s role has come to an end. They have demonstrated proof-of-concept in the necessary publications, filed IPs, and here is where the startup Solinas takes over.

“Our team has developed the first couple of robots through the laboratory. We expect the startup to pick it up and establish a mass fabrication facility. Our goal in the next year is to distribute 100 such machines. I expect that Solinas will play a very key role here. We are grateful that over the years a number of students including Divanshu and Bhavesh Narayani (IIT Madras MS alumnus now also with Solinas) have been inspired to work on this project, and today we have a dynamic team, reinforced by Solinas which is a start-up focussed on water and sanitation,” he notes.

He goes on to add, “We also hope to leverage support from government channels and CSR channels to mass-produce and distribute our solution to manual scavenging on a much larger scale throughout India. Meanwhile, I will be involved in terms of design, overseeing the whole effort, advocacy and establishing professional networks. But the actual fabrication effort has to be taken up by the startup. We have so far made about six units and the rest are in the process of being made.”