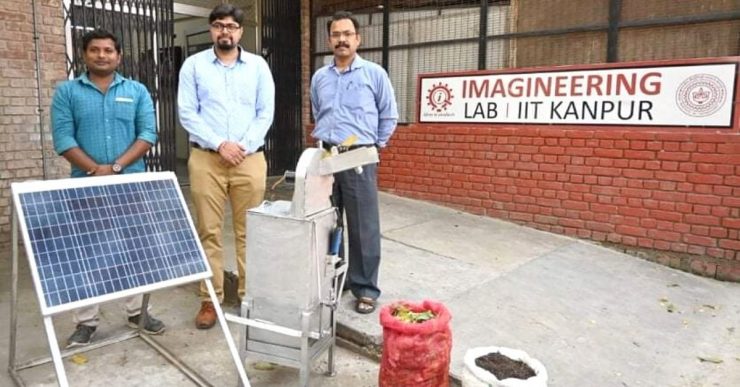 As good as it is to prepare nutrient-rich matter from kitchen waste, it comes with its own set of problems — unbearable smells, slimy ingredients, and the decomposition process of organic matter. For this, IIT-Kanpur alumni have innovated a much-needed solution.

BHOOMI — Bio-composting of Horticulture & Organic Waste into Manure Indigenously — is an automatic composter that converts organic waste in less than 20 days, making it an efficient and quick composting solution.

Hari Shankar, founder of startup Agnys Waste Management Pvt. Ltd, a SIIC IIT Kanpur-incubated company that built the device, says, “This is a metal machine researched and developed with support from Engineers India Limited, and equipped with a built-in shredder, waste mixer, aerator and temperature and humidity controller.”

Speaking with The Better India, the Patna-based innovator says, “My research work at IIT included working on waste management and composting. I learned about multiple issues that people experience while turning waste into compost and decided to bring a solution to overcome them.”

Hari says, “To use the machine, one has to introduce the organic waste into the hopper, and cover the lid. The in-built shredder reduces the organic matter into a fine and uniform mix. The fine waste then enters the main composting tank where the machine sprays a unique bacterial solution to initiate the decomposition process.”

The 26-year-old says the mixer and air pumps installed in the unit ventilate and assist the aerobic process. The increase in airflow accelerates the degradation. The mixture is allowed to sit and monitored using temperature and humidity control sensors.

Additionally, the carbon filter and a bottom tap to release leachate ensure the process happens without omitting foul smells.

“Once the temperature stabilises, it indicates that the compost is ready,” he adds.

Hari explains the entire process can be done manually and also using automation. “A leg pump is provided to aerate the tank for assisting the decomposition process. However, a solar panel or an electricity connection also does the same job of shredding, mixing and aerating by itself,” he says, adding, “The process runs for 15 minutes on electricity.”

The startup offers multiple models for domestic and mass scale usage. “The smallest unit can fit inside a balcony sufficing the needs of a family of four, and costs approximately Rs 25,000. A large unit that can process organic waste of 100 flats costs about Rs 8 lakh,” he says, adding, “The device is up to 30 per cent cheaper than others in the market.”

Hari notes that decentralised composting can be installed at any bulk generating entity such as housing societies, hostels, hotels and public institutions.

“The design is ergonomic, and a layman can operate it. Just put the organic waste into the machine, and the remaining process will automatically be taken care of,” he says.