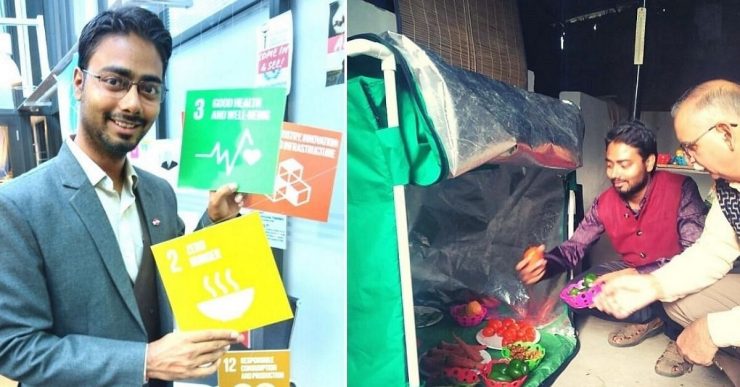 While most of us use a refrigerator to increase the shelf-life of processed and fresh food, farmers—who cultivate crops on a large scale—have to make do with storing crops in closed rooms or godowns but this doesn’t save them from perishing.

For this purpose, an IIT graduate along with his sister hailing from Bihar’s Bhagalpur, invented a device which stores vegetables and fruits safely and prevents damage. Nikki Kumar and Rashmi Jha’s Sabjikothi is a boon to farmers to protect their yields.

Sabjikothi has 10 times more capacity than a refrigerator and can preserve fruits and veggies for a time period of 3 to 30 days. The invention which costs half the price of a refrigerator only needs one litre of water and 20 watts electricity per day to operate.

“It only requires 10 watts of power which is equivalent to the amount required to run your mobile phone,” said the entrepreneur to The Better India.

Witnessing the wastage of horticulture products due to lack of storage facilities prompted Nikki Kumar to come up with such a unique innovation. This self-assembled storage device can be transported easily too.

The device maintains a controlled atmosphere inside by oxidising liquid into carbon dioxide, hydrogen and vapour. Degrading ethylene gas emitted by the crops delays their ripening and rotting.

Other than controlling post harvest wastage, the device can also aid a farmer in fetching a decent price for their produce even after storing them for a few days.

Watch to understand how a Sabjikothi works: