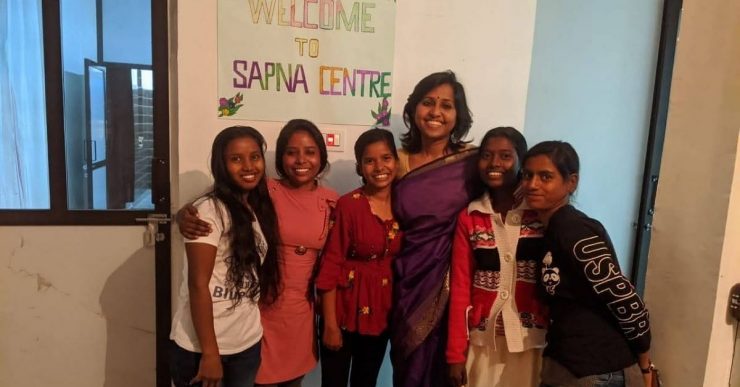 There are many influences that led to Surabhi Yadav starting Sajhe Sapne (shared dreams), a social enterprise that offers end-to-end support to women from marginalised backgrounds in launching their careers in the modern workforce.

Her parents instilled a strong sense of service in her. “As I was growing up, both my parents asked me over and over, ‘Of what use is your education if it’s not useful to the village?’,” she recalls in an interview with The Better India.

There’s the contrast she’s experienced in women’s experiences throughout her life. While her mother studied till Class 8, Surabhi has a double masters — a MTech in Biochemical Engineering and Biotechnology from IIT-Delhi, and a Masters in Development Practice from the University of California.

On the other extreme, she’s seen her extended family in Bundelkhand’s Madhavpura engaged in farming, where most women — her bhabhis, chachis, and cousins — don’t study at all. “When you live in four worlds like this, something happens inside. You realise what’s important and look for your sense of rootedness.”

These women, who did an incredible amount of hard work and put in much emotional labour, had few expectations from themselves. They would request her for a job as an attendant in her office. “There’s nothing wrong with such professions, except they don’t really value your emotional, professional, intellectual growth.”

This made Surabhi think about how everyone would be living a better life if these women were living up to their potential. “We’re missing out on their ideas, worldviews, creativity…There’s this whole set of the population that’s so desperate to learn, create, become something good. And you’re not even paying attention to it. It’s everyone’s loss.”

In 2020, when doing COVID relief work, she came across Phula in Bihar, who wanted to study — something no one else around her was interested in. Each day at 12 pm, Surabhi would get on a conference call with Phula and four other girls, none of whom even had access to the internet, teaching them skills required in the professional domain, like emailing, finding jobs, networking, and more.

Soon after, the 31-year-old launched Sajhe Sapne with a residential campus in Himachal Pradesh, where girls are given education and all-round development to enter the workforce. All 25 girls of their first cohort had jobs at graduation, with a minimum monthly salary of Rs 15,000. While a few struggled to retain their jobs, Sajhe Sapne has instilled a sense of confidence and resilience in them. “Nobody has stopped trying, this I can guarantee,” she says.

A vision of empowerment

Sajhe Sapne started with a clear picture. Surabhi envisioned a place — or lots of places — where girls can ask questions, play, teach, and learn. Just as primary health centres cater to the body, such a place would work on the heart, mind, and soul. She calls these spaces ‘sapna centres’. “These are centres where learning, laughing, creating, questioning, and finding growth opportunities for yourself and others is a norm.”

The girls populating these would be called sapnewalis — rural women with a fire in their belly, but limited resources. They’re encouraged to build sapna dals, which are their support system, a group or team of people that get excited when they’re growing and progressing.

Surabhi’s vision is to set up ‘sapna centres’ in every village of the country, making them an integral part of village life.

She started building her team and getting donations through a crowdfunding campaign, raising Rs 26 lakh in three days. The first ‘sapna centre’ was launched in Himachal’s Kandbari village.

Today, for several rural women who’ve put in the effort and investment to study till Class 12, there are few options ahead. The most obvious future for a majority of the girls is marriage. “There’s sewing and stitching, beautician courses. All these models don’t pay attention to growth. She’s becoming an economic machine. She’ll increase her income. But what about her aspirations, sense of self, agency?”

Such girls with a passion for education are identified through a network of community organisations the NGO collaborates with in villages, and invited to the Himachal campus for a nine month course.

Right now, Sajhe offers three courses. One is Umang, focused on development management, creating pathways for students to work in NGOs or the social sector. The second is Arohan, which offers primary maths education, enabling students to become educators in the subject. The third is Tarang, which teaches web development. They’re also working on creating more courses.

Not only does Sajhe design the courses, it also works on creating a learning culture. By giving them access to professional networks and spaces, they’re ensuring students have the training and confidence to become capable enough to find themselves jobs.

For instance, there’s Anjali from Rajasthan, who studied till Class 12, and started pursuing her BA. Along with that, she also started the course at Sajhe. “After the nine month course, I got a job as a field researcher at Takachar. It’s often hard for girls in villages to get a job after a nine month course. But that’s what is happening at Sajhe Sapne after the course.”

While she’s working hard to educate herself, Anjali has learnt confidence and refinement at Sajhe Sapne. “I learnt a lot of things, like communication skills, so the other person would be interested and pay attention to what I’m saying.”

The ideology fuelling the idea

“The emphasis is that we’re looking at you as adults. We’re going to look up to you for responsibility, accountability,” says Surabhi. She points out that a big problem today is that society simply doesn’t trust that rural women will learn. “It’s easy to open a stitching and sewing centre because it’s a repetitive job, so she can do it. Why aren’t you opening a strategy management course for her?”

Sajhe is challenging this outlook by starting with the baseline that these women can definitely do it. And it’s when you truly believe in their potential that you’ll put out high quality education.

This education is designed with the potential students in mind. “We provide end-to-end support in launching careers in the modern workforce, from mobilising sapnewalis to designing content and a learning culture that truly works for rural women,” says Surabhi. For instance, while the world progresses with web development, there’s no word for it in Hindi. “So someone has to do this knowledge production in a way where it is high quality, and accessible to rural women.”

Sajhe has a holistic approach, and their main vision is creating growth pathways, instead of just milestones like getting a job. This means that with increase in time and effort, five things should increase for a sapnewali — say (agency), skills, salary, support, and satisfaction.

“We want to make it a norm that the girl wearing a salwar suit is creating strategy in a big office. We want to ensure that they have a choice about where they want to grow.”