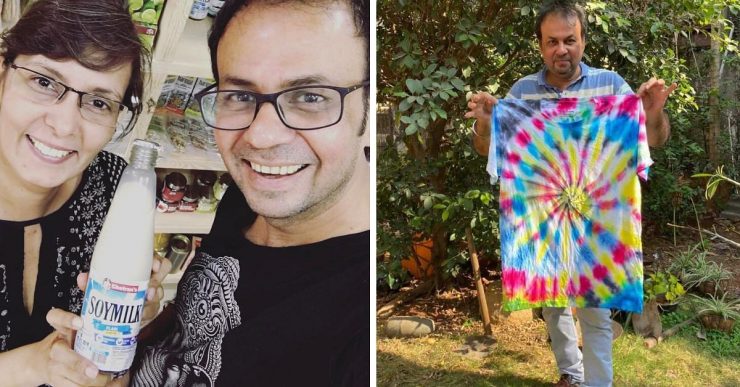 This dessert is a bit different from its counterparts at the confectionaries down the street — mostly, due to its ingredients. The wholesome dessert has cashews, lemons, almonds, and medjool dates.

This cheesecake is just one of the many delights offered on the menu at Rare Earth, a vegan cafe that Shamii launched in 2019 in Khar. In the same complex, he runs the Rare Earth organic store, where he sells vegan milks, butters, cheeses, spreads, mock meats, and more.

As you must have guessed, Shamii is vegan. He wasn’t always, though.

I ask him, how did you go from real estate to selling vegan products?

At the age of 14, he was walking the streets of Bandra when he saw a goat being slaughtered at a butcher shop down the road. The incident remained with him for days to come, but the delicious tandoori chicken made at home served as a distraction. Being born in a Sikh family meant that Shamii and non vegetarian food were best friends, he says.

Many years later, while scrolling through WhatsApp, he came across another such video — on how cows were treated in the dairy industry. The first incident of watching the helpless goat flashed vividly in his mind.

This time, he knew he had to take action. “I promised myself I’d never touch meat again,” he says.

He also points to how he was interested in Reiki for some time. “It speaks of how we shouldn’t harm animals, as every being has a living force in them,” he notes.

It has been 30 years since this realisation dawned upon Shamii. At that time, he was running another venture by the name Rare Earth — a real estate company. Today, only the name remains, but almost everything else has changed about the business.

Throughout his growing years, he was a lover of dairy products. “I would eat paneer three times a day,” he says. “So when I began my vegan journey in 2016, I faced two challenges. One was shifting gears with my eating habits. The second was finding products that were vegan.”

In due time, the entrepreneur found that he wasn’t alone. Emerging groups of vegans on social media platforms were proof of it. “I was a part of these groups where members would often discuss the lack of vegan options. A thought struck me — if people could find vegan products easily, more would adopt this lifestyle.”

Thus began his quest to find where these vegan alternatives were available and then bring them back to his office in Khar. Here, he had set up a rack to display them so people could come, see, and buy.

The initial list of items included soy milk, almond milk, vegan curd, and ice cream. In time, the social media groups — once full of messages lamenting the gap in the local vegan market — were now abuzz with Shamii’s regular updates about the new items he had procured.

“What I was trying to do, at the time, was simply make veganism convenient for people,” he says, adding that in the initial days, he did not focus on profits at all. Products were sold at their MRP.

So much was his passion that for two years, he would drive to Pune every few days to bring back soy curd to stock in his office. “I knew of only one person in Pune who made vegan curd and I wanted my customers to have a taste of it. I priced it at Rs 20.”

Before he knew it, the real estate office was filled with more racks, more products, and more love from the vegan community.

‘We needed a kitchen, so I turned my bedroom into one.’

Once the business picked up speed, Shammi was now faced with the tough choice of whether to devote his attention to real estate or to veganism. He decided to focus on the latter and dreamt of someday having a full-fledged cafe and store to replace the rack.

Though the idea had come to him, all he needed was a little push, which came in the form of a conversation with a cafe owner.

“In around March 2019, the cafe across the street was shutting down,” explains Shamii. “After negotiating a good price, I got some of their furniture, a few tables and chairs and two fridges. Now the only problem was, ‘Where would I put all of this?’”

Since the office space was too small to accommodate all the furniture, he turned to his ancestral bungalow, which was on the same plot of land.

Imagine, as a parent, waking up to the news of your son wanting to convert his bedroom into a kitchen for his business. One would probably experience reluctance, maybe some shock. This was the case with Shamii’s parents too.

Explaining their disdain, he says, “Coming from a family where tandoori chicken is our go-to, my parents never quite understood my need for transitioning completely to this vegan lifestyle and then going all out to make these huge changes.”

He adds that he, too, never foresaw the lengths to which he would go. “The only intent I started with was to make veganism convenient for people.”

So from a bedroom to a kitchen, how did it work out?

“This wasn’t the initial plan,” he tells me. “I first thought of setting up a sitting area in the courtyard behind the house and having the kitchen there as well. I imagined a picturesque view, open skies, and a pretty sit-out. But my plans were paused when the chef I hired said it was too hot a space to work in.”

This is when the 53-year-old decided that if he wanted to make the dream come true, he would have to give up his bedroom space. The sitting area could remain in the cafe, while his bedroom would be turned into the kitchen.

Thankfully, a few years ago when he was renovating his home, he had another door built in the bedroom, one that would allow him to enter and leave the house without disturbing his parents. “This worked well when I had the bedroom converted into the kitchen. As far as modifications, we did not have to do much. A little plumbing for the sink, and an induction stove,” he tells me.

After these initial adjustments, the kitchen was ready within a week. Shamii had a menu fully planned out in his head. Rare Earth, the vegan cafe, was ready to boom.

Today, Rare Earth is divided into the store and the cafe, the former in the office that was once for real estate, and the latter in the courtyard of his ancestral bungalow. Both are in the same property. The cafe sees a quaint setting where people can relish healthy alternatives — from the popular vegan milk and ice creams to the more fine-tuned mock meats, gulab jamuns made out of makhanas, tandoori burgers, and watermelon feta salads.

If you are in town, don’t miss out on the Testarossa pizza, which Shamii says is a hit. As I’m reeling from the surprising alternatives of this menu, I’m curious about the tagline of the cafe that reads ‘Creating a parallel vegan universe’.

This, Shammi explains, encapsulates what he set out to do. “I don’t want vegans to feel like they are missing out on anything by choosing this lifestyle. If they want butter chicken, that’s what I will give them.”

“The vegan version of it, of course,” he laughs in response to my bemusement.

At the cafe, Shamii works with a chef to curate a menu that people will relish. He also reaches out to home cooks and other stores, and sometimes collaborates with them as well.

“As the menu started to increase, we began to diversify our products and started various cloud kitchens on Zomato, all under the Rare Earth banner.”

The products are priced between Rs 20 and Rs 2,000 and are shipped all over Mumbai, and some across India. Shamii says they are now looking at expanding to other cities as well. The self-funded business, which began with an initial investment of Rs 4 lakh, now sees a turnover of Rs 9 lakh a month, he says.

The customers love the cafe as well, describing it as “a sweet little place with vegan wonders”, and a “wholesome experience”.

Sustainability takes shape in the paper tubs that replace plastic. Shamii uses organic waste from his kitchen as compost in his garden to grow papayas, bhindi, lemons and karipatta.

With his business blooming, and hundreds of vegans finding a place that fits their taste so perfectly, Shamii says sacrificing his bedroom was the least he could do, even if it meant he had to sleep on the couch in the hall.

But all said and done, he says he is happy. “I think every human is capable of creating the heaven or hell that they wish to live in.”

As our call draws to an end, Shamii tells me the blueberry cheesecake is ready. I guess I have found my reason to stop by at the cafe today.

You can place orders for home delivery from the cafe on Swiggy and Zomato.