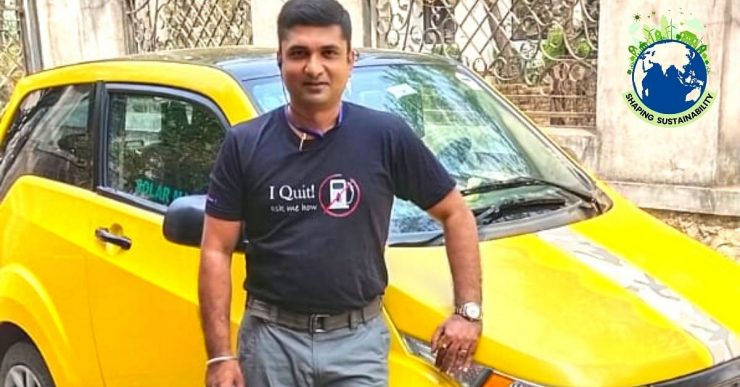 This article is part of a deep dive into Electric Vehicles in India. #EVinIndia is the first chapter of ‘Shaping Sustainability’, an exclusive series by The Better India to give our readers an in-depth understanding of how Indians are making sustainability a priority in all walks of life. Find more stories from the series, here.

Mahindra’s second hand e2o (electric) is Abhishek Mane’s 12th car. After driving SUVs, he made the shift to electric cars a year ago.

Abhishek, who lives in Pune, has been living an eco-conscious life for many years now — his entire house runs on solar energy. He also runs his own business of manufacturing and installing solar panels.

He says he had always wanted to make the shift to electric vehicles (EV). He first purchased two Okinawa electric scooters to see if the non-emission vehicles were worth it. After using them for a couple of years, he was sure of purchasing a car.

However, the prices of existing EVs did not fit his budget, so he opted for a second-hand car.

“Fortunately, my friend was looking for a buyer for his 8-year-old e2o. I purchased it at Rs 1.5 lakh and spent nearly six months fixing the damaged parts. So far, I have covered 18,000 kilometres inside the city and on highways. I drive approximately 80 kilometres daily due to my work. I have taken this car to Mumbai and Goa with ease,” Abhishek tells The Better India. .

What I spent on repair work

The first thing that Abhishek did when he received the keys to his car was take the e20 straight to Mahindra’s service centre.

“At the centre, they scanned my car and identified areas that needed work, like tyres and suspension. They gave me an estimated cost of Rs 63,000 for this, which I thought was a lot. So I purchased the spare parts from them for about Rs 12,600 and approached my trusted mechanic,” says Abhishek.

He purchased three tyres for Rs 9,900, and got a cell replaced in the battery for Rs 25,000. In addition, he also fixed the Electric Vehicle-Intelligent Energy Management System (IEMS) at Rs 40,000. The remaining expenses were in replacing balance rods, studs, rubber parts and onboard charger.

After the repair work, the car was charging fully within four hours, and giving a range of up to 100 kilometres on a single charge.

“I updated the battery with the one that my company manufactures, which prevents quicker drainage when compared to the previous battery,” he adds.

The charging takes up to 200 units of electricity, but thanks to his solar-powered house, Abhishek says he does not have to pay anything. He says that those who do not have solar power at home will have to spend about Rs 2,000 for charging, which is still significantly less than petrol.

“My running cost is Rs 1-2 per kilometre, which is almost 80% less than my previous petrol car, which was Rs 8-9 per kilometre,” he says.

Although he spent nearly as much as the purchasing cost on repairing, he says it was totally worth it as per his needs.

“I wanted an automatic car that I could drive on highways and cover long distances with. Thanks to the EV charging stations, I am able to take interstate trips without any discomfort. The engine has no vibrations and even during peak traffic hours, it works fine,” he says.

Things to look for before buying a second-hand EV

Abhishek says that the most important factor in investing in an EV is planning.

“Figure out nearby charging stations. Ask yourself how much range you want daily and be ready to maintain it properly. Look, in EV there is only one moving part, which is the motor, so the maintenance is not that much. If you use a lithium phosphate battery, then your battery will degenerate only by 20% after you ride 2,500 kilometres,” he says.

For battery maintenance, Abhishek charges it every three days and only after the charge comes down to 30-40%.

“Look out for the health of tyre, suspension, battery, motor, and transmission when purchasing a second-hand car. Identify the problems and fix them in your trusted garage. Leave your range anxiety and plan properly,” he adds.