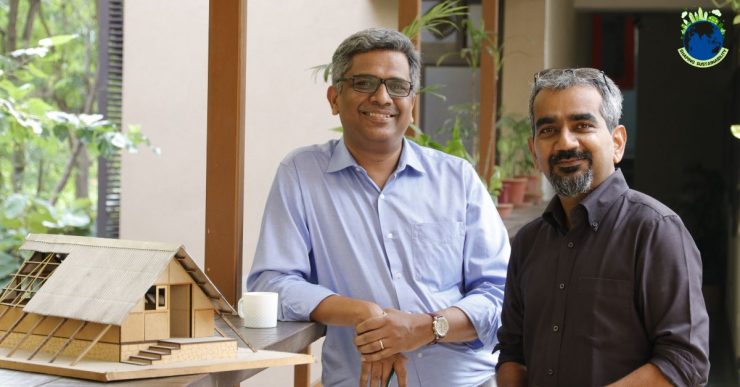 In 1998 a tropical cyclone hit the coast of Kandla in Gujarat and took away at least 3,000 lives in a few hours. While the cyclone was the catalyst, one of the main causes for the magnitude of the loss of lives and livelihoods was that the systems and infrastructure to deal with such disasters were ill-prepared.

The scale of devastation seen over the news prompted two young architecture graduates – Dr Manu Gupta and Dr Anshu Sharma, the founders of SEEDS (Sustainable Ecological & Environmental Development Society), to board a train and head to Kandla to offer whatever help they could. Unfortunately, what they saw before them when they got to the disaster site was devastation at a scale that neither of them imagined could be true.

“Trauma and helplessness were writ large on the face of every person who survived the disaster,” Dr Manu tells The Better India.

Their experience gave them and SEEDS a renewed sense of purpose and impetus. The duo founded SEEDS in 1994 to fulfil their burning ambition of making a difference in people’s lives. Today, SEEDS is South Asia’s foremost non-profit organisation working in disaster risk reduction and climate change.

Over the years, SEEDS has rebuilt more than 62,000 homes, 650 schools and healthcare facilities, carried out school safety programmes for more than a quarter million children, developed disaster management plans for 500+ communities, provided emergency assistance to more than 830,000 people and positively impacted the lives of more than six million people. More than all the numbers, the main contribution of SEEDS has been the instilling of hope to people who were at their most vulnerable – after having lost everything of value – relationships, livelihoods, property – from natural disasters.

Dr Manu says that it was the idea of building something different that pushed him and his closest friend Dr Anshu to start SEEDS. “It was only when we started working in disaster-struck zones that the real magnitude of what could be done struck us,” he says. SEEDS did not come into being because of any single aha moment, “In fact, I would attribute it to a series of aha moments along the way,” he adds.

“In the aftermath of the Kandla cyclone, the team realised that a simple J-hook, if used, could have saved the roofs of the houses from flying off, and close to 800 workers at the salt pan could have saved their homes,” he says. It was on-the-ground insights like these that opened their minds to look at the architecture and construction practices deployed in such vulnerable areas.

Beyond Disaster Management to Prevention

“At SEEDS, we are not just looking at disaster management but also the focus on prevention and preparedness to deal with the disasters,” he says.

For example, he shares his experience in East Delhi’s crowded slum area where the organisation had gone for some relief work. “While on the ground, we identified that the entire slum area was susceptible to a fire incident. We know that this is a key risk, which can lead to the destruction of the entire neighbourhood within minutes. This led to us setting up a simple fire post with a water hose – a simple but effective solution that can offset the risk significantly.” he says.

Dr Anshu says, “Hazards may be inevitable, but their turning into disasters and losses is possible to avoid. We work with children, community volunteers, local leaders, construction workers, and duty bearers to help them understand the risks they face in their local context and plan to reduce avoidable risks. Avoidance of disasters begins with risk awareness and small local investments in preparedness.

“We realised that we were in a unique position to influence people’s mindsets. Once we start engaging with communities, they quickly realise that our purpose is fully aligned with their welfare,” he adds.

“We wanted to take this idea and bring about this change in mindset to the locals,” he says. So they began to focus on sustainability – by finding ways to use natural and local materials like bamboo and mud to build homes. In some areas, these materials offer natural protection from disasters.

In most of the projects, the team at SEEDS is looking at local solutions. For example, the technology-based answer to soil erosion has been building RCC walls, which have proven ineffective in disaster-prone zones. So instead, we have relied on locally growing weeds. This has been tried and tested in Maldives and Pulicat in the Northern part of Chennai, where much of the region suffered soil erosion.

“This dissipates wave height and acts as a wind buffer in many areas,” he adds.

Going above and beyond

SEEDS also began to develop programmes that brought financial platforms and communities together to enable communities to access finance for various productive uses in a sustainable manner. The Bihar Sustainable Livelihood Development (BSLD) project is one such. Kanchan Kumari (31), from Pataniya Panchayat, Darbhanga, a beneficiary of the BSLD project, says it has been a great help.” Under this project, SHGs (Self Help Groups) were formed in our village where each member had to contribute 50 rupees per month which allowed us to take a loan with an interest rate of two per cent.”

“I availed a loan of Rs 2000 from the SHG for irrigation purposes for the wheat crop sowed in our fields. I used the loan to carry our timely irrigation, which led to a great yield this year. We also sold this crop in the market. The loan helped meet my family’s needs and boosted our livelihood.”

Dr Manu says about the programme, “The major objective of BSLD is capacity building of vulnerable communities for sustainable livelihood, poverty alleviation, and preparedness for climate emergencies. The interventions include a holistic approach towards the development of the community, women’s empowerment through SHG formation and training and disaster risk reduction related activities.”

The organisation works with school children across the country, and Dr Manu says, “Children take on these skills very naturally. They respond very well to the programmes we conduct.”

“When a small child in a school where we have done school safety activities takes me around showing the safety features and proudly explains what is to be done in an emergency, I get this feeling of success. Every time I visit such a school, one child with shining eyes talks to me. Every single time,” adds Dr Anshu.

Abhishek Das (31), who has been associated with SEEDS for three and a half years now and says, “While disaster management might be a point of entry for the organisation, we stay for a minimum of three to five years post that to rebuild and work with the communities. Building resilient communities has been the motto.”

“We are looking to build back better and build preparedness amongst communities.”

All of this started when two young graduates decided to start something on their own, instead of focusing on climbing the corporate ladder like most others. It began with them, and it has now grown beyond them.

#ItStartsWithMe is something that the founders of SEEDS embody.

On World Environment Day, wishing more power to the team at SEEDS as they grow deeper roots and provide cover to a lot more communities in the future.