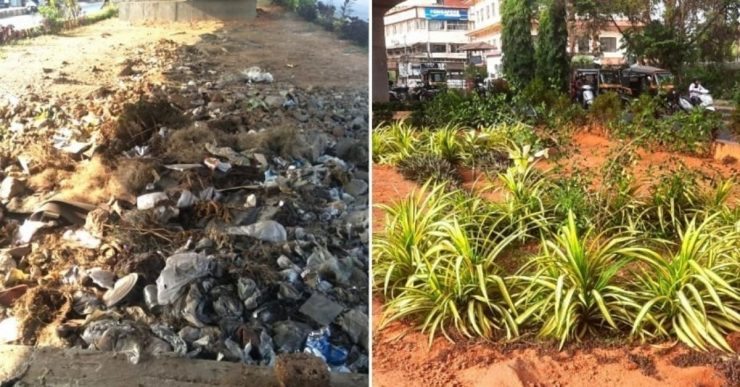 Every day, as Shamseer P walked by the Panniyankara overbridge as part of his morning walk route, he’d see the dumpyard that had slowly formed under the bridge over the years.

“People passing by would throw their garbage under the bridge. The place was dirty and the presence of garbage was attracting packs of stray dogs. The area smelled terrible, and this made it difficult for people to walk through the area,” Shamseer tells The Better India.

Moreover, Shamseer witnessed several accidents in the spot, where cars would hit the stray dogs who had come to feed on the garbage.

So in 2020, he decided to take matters into his own hands. Today, the dumpyard has all but vanished, and in its place is a beautiful patch of garden with green shrubs, as well as a few flowering plants like 4 o’clock plant, 8 o’clock plant, jungle geranium, oleander, roses, and more.

Of the 600-metre long space under the bridge, built by the Delhi Metro Rail Corporation (DMRC), around 300 metres have been converted into a lush green patch.

‘Why not turn the dump site into a garden?’

When the matter seemed like it would never resolve, Shamseer approached the municipal corporation and enquired if something can be done. He says, “To my disappointment, they said they cannot do anything as the bridge was built by the DMRC.”

The 43-year-old, who works as a designer for a newspaper, gradually realised that there is no point in knocking on doors and waiting for authorities to clean the space. “So, I took up the initiative myself. I began by taking some time out from my morning walk to pick up the garbage. Then, I dumped it on the nearby vacant land. After letting the waste dry, I burnt it,” he says.

There were many who discouraged him, says Shamseer, saying that his efforts won’t work. “I didn’t pay heed to those comments,” he adds.

Shamseer says that even as he toiled hard to clean the place on one side, people would continue dumping waste on the other. So he started looking for an adequate solution to get rid of the problem completely.

“That’s when I got the idea — why not turn the dump site into a garden? If we keep the place clean and give it a beautiful makeover, then the public won’t dare to dispose of any garbage,” he says.

“I started cleaning the place in October 2020, during the lockdown. I put in green, colourful, and decorative plants. There was no water connection nearby, so I used to cross the road and get water from the nearby mosque,” he says.

Noticing his efforts, several people started approaching him to help him in his initiative, he says. “It took around 3-4 months for people to notice my efforts and come forward. We started working as a group of 5-6 people, and people from the nearby stores joined in as well,” he says.

Over time, the team realised that the quality of sand wasn’t good enough to grow plants. Shamseer says, “The space beneath the bridge was filled with concrete and quarry waste. We realised it after several of our plants died due to lack of fertility. So, the only solution was to fill in the space with better sand.”

“For this, we needed some funds. So, we crowdfunded and raised around Rs 60,000 from nearby areas. With that, we bought around 25 loads of sand. We also expanded our planting venture to over 300 m,” says Shamseer.

“The plants were mostly bought or donated. There is a nursery close to the space and they were kind enough to give us several plants for a discount. Also, several people donated us plants”

He adds, “We wanted it to be colourful, so we grew plants with colourful leaves. We mostly grow leafy plants rather than flowering ones, as the latter might distract motorists while driving.” “But we had one more challenge to tackle — finding a source for watering the plants. Even though the mosque and shops near the place were ready to offer water, it was difficult to bring it in buckets, that too for these many plants in a 300 m stretch. So, with the help of a shop, we took a water connection through the drainage space that crossed the road. We then connected it to hoses and fixed four valves on different sides of the garden,” he explains.

“We used around Rs 15,000 from the crowdfunded money for the water connection,” he adds.

Shamseer, who continues to go for his morning walk, also finds time to take care of his plants. “Our group meets daily at around 6.30 am in the morning and we spend around two hours daily planting, watering and taking care of the plants,” he says.

He hopes to expand this venture to the entire stretch, “But we can’t do it at this moment due to the limitations of water connection and required funds. We are also planning to turn this into a park for people to spend their evenings and also to make it suitable for children,” he says.