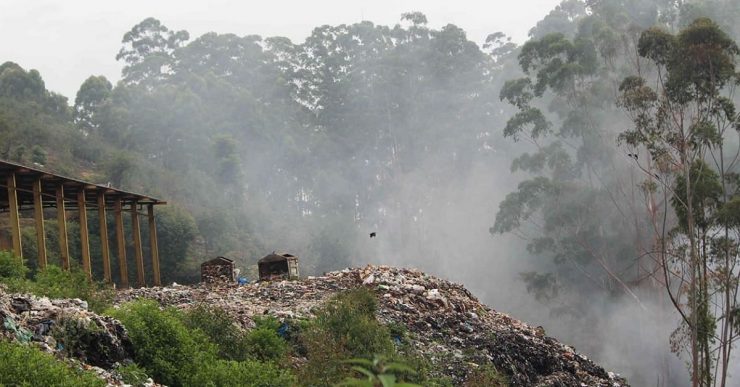 If you are reading this, you are probably a resident of the hills or have visited them and are frustrated about the plight of our hills and mountains, which are getting irreparably filthy. Once you get past blaming governments, plastic bottles and packaging, there are the behaviours we can only attribute to a community as a whole. There is the bystander effect (the belief that someone else will handle it); the comforting quicksand of convenience (easier is better); and cheapest is best. The last of these, an economic factor, is particularly challenging because cheaper material options often result in a lower quality of materials that are harder to recycle.

We bring you nine lessons that anyone can consider, having spoken with citizens, civil society, industry representatives and government officials who work with solid waste management in five hill stations across India. None of these towns has a perfect, closed-loop model—one that has zero residues headed for a landfill. We could argue that perfect circularity is an impossible ideal that may never be achieved, yet is still a worthy goal to strive for.

Speaking remotely to people living on other mountains in different parts of the country, we found that everyone we talked to agreed that the challenge is far too complex for any one stakeholder to solve — the government, the private sector or citizens. The fight against mismanaged waste requires all stakeholders to work together. It also emphasised that ‘mismanaged waste’ is ‘misplaced resources’.

This distinction between ‘mismanaged waste’ and ‘misplaced resources’ is an important one. The former term is built on the premise that at some point materials cannot be recovered and are eventually ‘wasted’. Misplaced resources, on the other hand, suggests that everything can be utilised, either recycled or as fuel, but just needs the right systems behind it.

So, here are nine common lessons gained from experts across all hill stations.

Almost all waste management initiatives, except for in one of the hill stations, were first initiated by the citizens till their work was levelled up by a larger body—either the municipality stepped in or an industry body or a cluster of HNIs (high-net-worth individuals) that helped fund a larger project got involved. Often these come down to one person or group, who simply started by cleaning up their neighbourhood and then went on to look for a good way to dispose of what they had picked up. Stakeholders across these towns often named one person or group in each town– in Panchgani, it was Mona Patrao, in Mussoorie Dana Crider, in Coonoor it was the Clean Coonoor Project and in Ooty, it was ‘The Make Ooty Beautiful Project’. From here, citizens, organisations and governments took on more complex challenges through systematic problem-solving.

2. Every town has its big moment. Look out for it. Seize it:

All the towns that have had some amount of success usually point at one single event that changed everything. Ooty identifies a zero-waste exposition that was hosted by citizens and a team including members representing organisations such as the Market Association, Hotel Association and Rotary Club’s Ooty Central chapter. Mussoorie cites the moment the NGO KEEN decided to service not only Woodstock School but also the entire town. Coonoor recalls the cleaning up of their local stream that ran through town, which brought together the most passionate zero-wasters. For Panchgani, it was bringing the largest slice of the population into the system—the boarding school residents who comprise almost half of the town’s populace.

3. Address all three aspects of the challenge:

None of the towns addressed all three facets of the challenge thoroughly. The three facets are illustrated via the now-famous bathtub analogy. Judith Enck, the founder of Beyond Plastics, said, ‘Let’s say you walk into your bathroom at home [and] the bathtub is overflowing with water. Well, what you would do is try to turn off the tap as opposed to grabbing a mop or some towels.’

Too many campaigns and initiatives have focused on mopping up the mess, instead of closing the tap. This is possibly because “closing the tap” and “regulating drainage” are the less business-friendly options. Often the largest contributor to a hill station’s economy, hill station waste management systems are almost always designed only for the core population and not for the hospitality industry. The populations of almost all the towns covered ballooned to well over five times the number of its long-term residents during weekends and holidays.

Municipalities have been reasonably successful in managing their local population’s waste. However, preparing for spikes in tourism requires agility across departments. Often there are simply not enough bins, people to manage the waste, trucks to transport it and space to store and sort it.

5. Don’t focus only on anti-littering campaigns:

6. Duplicating systems from the plains will not work:

Composting occurs faster in drier and warmer climates. Anyone who has handled compost would tell you how the temperature in a compost pile rises well beyond the average human body temperature because of the microbial activity in the pile.

According to a paper on the physics of composting by Cornell University, ‘…decomposition occurs most rapidly during the thermophilic stage of composting (40–60°C), which lasts for several weeks or months depending on the size of the system and the composition of the ingredients’.

Too much water running through compost lowers temperatures. Compounded with mountainous temperatures that are often well below 25 degrees, environmental conditions are not ideal for a compost pit to thrive naturally.

This factor also hinders home composting, and that in turn impacts segregation, which ripples outwards along the waste supply chain.

7. There is money to be made at the end-of-life of almost all waste: While there is a well-oiled system in place to pay for a bag of chips and its packaging to travel up the mountains, there are often no systems to pay for it to go back down the mountain to the appropriate place and close the loop. These systems exist, but they do need to be implemented appropriately. Part of the reason is that there is no economic model to pay for the transportation of all that waste back down the hills to the recycling units.

According to Adrian Merrington in Applied Plastics Engineering Handbook (2017), there are four types of plastic recycling. Each of these types would have its economic chain.

For instance, most hill stations do not generate enough waste at scale to make the set-up of a pyrolysis plant (plastic to oil) feasible.

A millennia-old sociocultural construct assigned waste collection to one strata of society. In doing so it essentially took away responsibility from the rest. A director of one of the non-profits working in solid waste management said that out of the 134 people employed by them to manage their town’s waste, 130 belong to a single caste. ‘There’s some form of this old system still in play. We need leaders in more privileged communities to take the lead to destigmatise the act of managing one’s waste, as well as someone else’s waste,’ said the director under the condition of anonymity.

9. Lack of action, not awareness, is the problem:

It became quite clear that government campaigns and the work of activists, civil society and the media have been successful. Everyone, across all levels of education, is now well aware of the fact that plastic packaging thrown in their garden is not going to turn into soil. Everyone is well aware that plastic is a problem. Almost everyone has been exposed to segregation and composting to some degree. In 2021 it is safe to say that a lack of awareness is not the issue—it is the lack of action.

This story was first published on thekodaichronicle.com. You can read more about the challenges unique to each of the towns by clicking here.