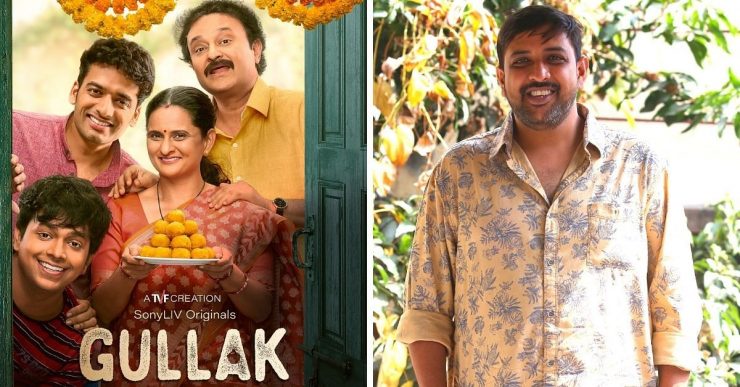 You know the writing has hit and crossed the boundary wall when certain scenes wrapped under the garb of humour without being preachy, make you uneasy and nervous.

The Viral Fever (TVF)’s family drama, ‘Gullak’ on SonyLiv is one such web show.

Directed by Palash Vaswani, the show is set in an unnamed town of North India that follows ‘kisse’ (tales), not a ‘kahani’ (story) of a middle-class family of four. ‘Gullak’, meaning ‘piggy bank’. The narrator of the show, voiced by actor Shivankit Singh Parihar, brings his quick-witted and satirical take on the Mishra family making every episode funny and relatable. Starring exceptional actors—Jameel Khan (the father) and Geetanjali Kulkarni (the mother) supported by their reel children, Vaibhav Raj Gupta and Harsh Mayar—the show explores the most mundane problems (like nosy neighbours and sibling rivalry) to big ones like corruption, exam failure, career and money, fragile egos and more.

In its third season (which was released on 7 April), the show has managed to sustain its slice-of-life and heartwarming flavour (which is quite a feat given that movie sequels and more seasons tend to lose their charm).

As a viewer one cannot help but wonder how the writers have managed to stick to reality without misusing their creative liberty to create a convenient narrative when it gets challenging.

To understand and decode the fabulous writing, The Better India caught up with Durgesh whose life took a pleasant turn post Gullak’s success.

“I grew up in Uttar Pradesh’s patriarchal landscape where women were never considered equal to men. We lived in a joint family where our days began with chaos and ended with laughter and endless chatter. One thing that stood out for me amidst the chaos and laughing was my mother’s struggles to get respect, freedom and dignity. As a writer, I have tried to inculcate these domestic issues experienced first-hand wrapped around humour. That is what made the audiences easily connect with Gullak,” he says.

He does not explicitly say this but Geetanjali’s character, Shanti Mishra, is his tribute to his 70-year-old mother who lives in Machhli Shahar, an hour’s ride from Prayagraj.

To Make A Hit Web Show

Durgesh completed his schooling in Hindi medium in his hometown and then moved to Allahabad University. Besides moving out of his house for better education, Durgesh wanted to get away from the injustices he saw at home.

He did not want to be in a house where respect was only one-sided, where women were treated as second class citizens and domestic violence was rampant.

So one day he boarded a bus to Allahabad and against his parents’ wishes appeared for an entrance exam for an undergraduate Arts programme. No one in his family understood why he wanted to get into Arts when he could have ‘done Science and earned better’.

However, his sister and mother, who otherwise did not speak up for themselves, took the risk and gave him the money to cover his expenses and college fees.

This act of bravery from the women proved to be the turning point of his life.

At the University, he was introduced to literature, student politics, newspapers, prolific writers and more. He completed his Masters’s in Mass Communication.

If writing literature was not enough, Durgesh dipped his toes into world cinema too. A small-town boy who had never seen anything besides Hindi movies was now diving deep into the worlds of legendary filmmakers such as Jafar Panahi, Akira Kurosawa, Asghar Farhadi and more.

However, he soon realised that this treasure of knowledge and pool of storytellers would not provide him with a livelihood. So he packed his bags again and moved to Mumbai in 2012.

He knew no one in this mega city so instead of directly running behind his passion for storytelling, he dabbled in stable jobs including journalism, radio and advertising.

His penchant for writing was first recognised by a radio channel. He was originally hired as a junior writer for RJ Nilesh Mishra’s famous show ‘Yaadon Ka Idiot Box’ and within a few months, he was promoted to lead writer.

A desire to do something more took him into advertising where he wrote jingles, and copy ads for prestigious ad firms like DDB Mudra and Ogilvy for 4-5 years.

In 2019, the creative writer in him pushed him to explore a story telling format that went beyond 30-seconds. Luck favoured him and Amrit Raj Gupta, a leading digital content creator, approached him to write the title track for Gullak.

“Amrit knew me from my advertising days and he had liked my jingles. I may have written it as yet another project but the love ‘Yaadon ki Gullak’ received online gave me the confidence to change my career path. I was surprised to see that my writing had the power to move people,” he says.

His honest and sincere writing bagged him a gig to write one episode of TVF’s Panchayat series (starring Jeetendra, Neena Gupta and Raghuvir Yadav). This later got him season 2 of Gullak.

Despite the confidence and faith that makers of the aforementioned series put in him, Durgesh had his reservations. He did not quit his ad job after all he was the creative director. The taunts that writing will not get him any money from his family still haunted him.

It was only much later that he finally resigned with support from his wife, Komal.

It is almost ironic when Durgesh says that his writing is very vernacular. Although he has taken inspiration from filmmakers all over the world, he does not want to explore non-Indian narratives.

“I love Batman but I cannot create a Gotham-like city for Indian audiences. It will not be relatable. If I want to show robbery or crime I will keep the flaws of Indians and society in mind. I will not romanticise or glorify it with tech-savvy stealing equipment. I would go the Sriram Raghvan route. In his movie, the watchman is distracted by crowd chaos and the two robbers shut the bank, loot the money and leave,” he says.

That said, he does have the fear of being ‘boring’ because relatable scenes he writes are already appearing in everyone’s daily life. There is no escapism.

“That’s where the layer of humour comes in,” Durgesh interruptedly says.

“Jokes, even if they are PJs, will not bore you. If I have to show a crime scene I will use humour. This again stems from what I have seen in my family. After my father’s funeral, we were going back home and in between, a few of our relatives halted in the market to eat kachoris and rasgullas. In such a sombre environment, they did not forget to smile or relish food,” he adds.

Much of his writing comes from his own experiences or things he has seen around him, there is originality to his work.

For instance, in one episode of Gullak ‘Cheeni Kam, Paani Jyada’, Jameel’s character, Santosh, is excited to taste his favourite chutney Shanti is making on sil batta (grinding stone). The scene begins with an anticipation of a mouth-watering food item but ends with unearthing the deep-rooted patriarchy of the Mishra family.

Santosh fails to realise the painstaking effort of grinding chutney manually as opposed to the convenience of a mixer grinder.

It is only when Shanti mentions that she has been making this chutney on sil batta ever since she got married (but instead of making it on the kitchen platform she has to sit on the ground because of knee pains) that it hits him and the viewer of how unfair this is. The episode hits the final nail when Shanti uses her kitty party money to purchase a mixer without first consulting with her husband. With this, she asserts that she has not forgotten to love herself.

“That scene is straight out of my mother’s ordeal of making chutney on sil batta back home. She got the mixer very late in her life but deserved it much earlier. I saw my mother liberated after my father’s death. Through this show, I have attempted to create a world that I wished my mother was a part of. This family, unlike mine, is okay with apologising and open to change,” he adds.

Asked if Shanti is his favourite character, he quickly says ‘no’. Instead, he chooses characters that have not yet appeared in the series. “Pinky mama and bittu ke papa are only known through the main characters. We never see them appear but we know how they are. That style of writing is my favourite. In season 3, we have added one more invisible character of halwai,” he says.

What’s next for Durgesh?

He completed writing season 3 of Panchayat and an anthology of four short films. He is looking forward to seeing his characters and stories come alive through regional directors like Bhaskar Hazarika, Kaushik Ganguly, Gurvinder Singh and Nagraj Manjule.

He has also written a show for HBO India and a movie revolving around the life of a journalist. He is soon planning to wear the director’s cap.

With so many projects lined up, Durgesh is quite busy but happy that his emotional baggage is finally translating into stories.