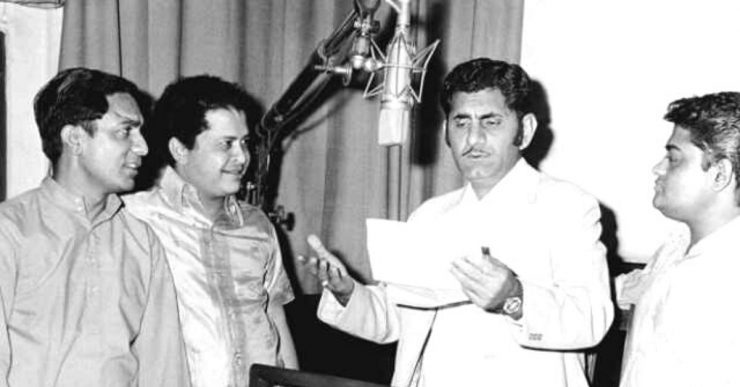 Playback singers from the likes of Asha Bhonsle, Lata Mangeshkar, Kishore Kumar and Mohammed Rafi to Udit Narayan have all breathed life into his words as well. Legendary Bollywood actor Dharmendra called Bakshi a ‘King’ for his immaculate body of work, while filmmakers like Mahesh Bhatt referred to him as “a steady flame, with a sound mind”.

Here’s the remarkable story of this legendary, but forgotten figure in Hindi cinema.

Growing up in Love with Film Songs

Born on 21 July 1930 in Rawalpindi (now in Pakistan), Bakshi harboured ambitions of becoming a playback singer in the Hindi film industry. His family, however, had different expectations of him. His paternal grandfather, a superintendent of prisons in the erstwhile Punjab Province of British India, and father, a bank manager, actively discouraged Bakshi’s passion for music.

Inspired by the syncretic traditions of his hometown, where people heard music from the Mosque, Gurdwara and Hindu temples, and the folk songs sung by farmers, Bakshi found a way to escape his father and grandfather’s objections. Whenever they weren’t around, he would walk around his neighbourhood either reciting verses from folk poems or singing film songs.

By his teens, Bakshi had joined the Indian Navy, but soon after, Partition struck. Picking up whatever they could, the family took off in a Dakota aircraft for a new home in India. Post Independence, he even worked for the Indian Army. All these experiences would influence a large part of his songwriting, whether it was the nostalgia associated with his childhood, the pain of leaving his hometown during Partition or his patriotism having worked in the armed forces.

You can hear some of these influences on songs like ‘Aaya Hai Mujhe Phir Yaad Woh Zaalim’ (Devar, 1966), ‘Mere Desh Mein Pavan Chale Purvai’ (Jigri Dost, 1969), ‘Ghar Aaja Pardesi’ (Dilwale Dulhaniya Le Jaayenge, 1995). And even in songs like ‘Yahan Main Ajnabi Hoon’ (Jab Jab Phool Khile, 1965) where he juxtaposes nostalgia for his childhood with the alienation he sometimes felt living in the bustling metropolis of Mumbai and its chaotic film industry.

One of Bakshi’s biggest influences growing up was his mother Sumitra Bali Bakshi, whom he tragically lost at the age of just six. In fact, one of the few things he was able to pick up from his home after escaping Rawalpindi during Partition was a photo of his mother. It’s a photo he kept with him throughout his life. Despite all the success that came later on, the event left a serious imprint on his mind and would go on to influence his songwriting too.

In a 1993 interview with journalist Mrityunjoy Kumar Jha, Bakshi recalled how music composer SD Burman explained a scene to him from Aradhana and asked him to write a song for it. About three days later, Bakshi came back with a song which excited SD Burman.

“How did you write such a wonderful song?” Burman asked Bakshi. To which he replied, “Dada, my mother passed away when I was a little child. When I wrote this song, I thought of her.” The song which emerged from this exchange was ‘Chanda Hai Tu Mera Suraj Hai Tu’ sung by the late Lata Mangeshkar. In the same film, however, Bakshi also wrote other classics like ‘Mere Sapno Ki Rani’, ‘Kora Kagaz Tha Yeh Man Mera’ and the timeless ‘Roop Tera Mastana’.

Making it in Bollywood

But before he could write all these songs, Bakshi had to get his foot into the door and that wasn’t easy by any stretch of the imagination. As he notes in a biography, ‘Nagme, Kisse, Baatein, Yaadein – The Life & Lyrics of Anand Bakshi’ written by his son Rakesh Anand Bakshi:

“I arrived here with lots of disadvantages. I knew no one to begin with and had no support [from] my family. However, in hindsight, I now realise that I had one very big advantage: I could sing and suggest Punjabi folk tunes with my lyrics; both came naturally to me. I had been singing and composing my own verses for friends since childhood; I did so for my peers in the army as well. I didn’t know then that it was to work to my advantage. Moreover, it was the singing I had been doing since childhood that made me want to write poetry in my teens.”

By the late 1950s, he had spent months calling studios to meet directors, composers and producers, but to no avail. He finally got a small break with the 1958 film Bhala Aadmi, when director and lead actor Master Bhagwan hired him to write songs. But his first major break in the film industry came the following year when noted composer Roshan [Lal Nagrath Mohan] chose him to write lyrics for his 1959 film CID Girl starring Balraj Sahni, Geeta Bali and Helen.

The story of how he got this gig exemplifies the intense work ethic and discipline that marked Bakshi’s career. One day, despite heavy rains that shut down Mumbai’s local train and bus services, Bakshi walked 19 km from his temporary residence in Borivali to Roshan’s home in Santa Cruz carrying a book of poems he had written and a broken umbrella.

There were two key facets to his process — a film’s storyline and simplicity. As Rakesh wrote in his biography, “Many directors told me that before beginning work on a song, Bakshi would ask them to narrate the entire story to him again and again. And once he had absorbed the film’s plot, even an earthquake could not have distracted him. Though the story was of prime importance to him, the lyricist understood and respected the role of the music composer. He knew that it was the trio of composer, singer and lyricist that brought a song together.”

Bakshi himself had said, “How do I write film songs? I always first hear the complete story, understand the plot and characters deeply, and then hear the individual situation of the song required. I think I am a very good listener. Good songs exist in good stories. It’s a matter of getting them out of the situation itself. I unlock my songs from the situations provided to me by the scriptwriter and director. Then I discuss all I have heard with the music director and director several times; only after that do we move on, together, to create the tune and lyrics.”

“The songs are in the story. I always picture how the song will play on the screen while writing. I can visualise it even if I don’t know how the director will shoot it. Filmmakers like Subhash Ghai lift my lyrics to extraordinary levels by picturizing them very well,” added Bakshi. There were even moments when he wrote songs “tuned to the metre of my heartbeats”.

The second facet of his songwriting process was ensuring that it was written in simple language which everyone could understand. Since his formal education only extended to Class 8, Bakshi would often admit that his vocabulary was ‘limited’. Nonetheless, his approach to songwriting was co-signed by other lyricists he respected dearly including Dinanath Madhok, Sahir Ludhianvi and Shailendra. They all advised him to maintain that simplicity.

Having said that, there were still those in the industry who looked down upon Bakshi’s work. They would say, “Anand Bakshi tukbandi karta hai. Woh toh shayar hi nahi (He is a rhymester, not a poet).” His response to these taunts was, “I have never claimed to be a poet. Moreover, khayal apna apna, pasand apni apni (Each to this own).”

As Rakesh wrote in his father’s biography, “Of course, the lyrics writer can fly, like a poet. But only within the sky of the story. This makes it a difficult discipline compared to poetry. Unlike a poet, the film lyrics writer has to gel with the others without losing his or her individuality.”

In the following sentence, Rakesh refers to a quote by Pt Narendra Sharma about film lyrics: “The film lyrics writer inspires and entertains the listener, encouraging him to believe he or she could perhaps be its writer, its singer, or its music composer.” Some would argue that songs like ‘Main Shaayar Toh Nahin’ (Bobby, 1973) and ‘Main Shaayar Badnaam’ (Namak Haram, 1973) were sly digs at those critics who demeaned his pen game.

Besides all the countless instances of his lyrics inspiring millions of Indians, there is one that stands out in particular. According to multiple accounts, Bakshi one day received a letter from a fan who wrote to him about how his song lyrics saved him from dying by suicide.

The fan had allegedly laid down on the railway tracks passing through his village. But as he waited there for the train to come, he remembered the words of a song from the 1974 film Dost called ‘Gaadi Bula Rahi Hai Seeti Baja Rahi Hai’. Loosely translated a part of the song reads:

Don’t defame a train by keeping your head on the rail.
Don’t lose faith and have patience, come, let’s go back home.
This night is passing, the morning is arriving.
The train beckons, blowing its whistle.
Life is about moving on. Life keeps moving.

Realising his grave mistake, the fan got off the railway tracks and jumped out just as the train whistled past him. This letter, Bakshi believed, was his biggest award despite the 40-odd Filmfare awards he received for ‘Best Lyricist’.

He eventually passed away on 30 March 2002. Not a man to retire, he continued writing lyrics to film songs till a few days before he breathed his last. By any measure, it was an extraordinary career adapting to changing expectations, culture and sensibilities of the film industry into his 70s.

While his soul may have departed, his words will continue to stand the test of time.

‘Music and lyrics: For Anand Bakshi, his life was his muse’ by Ganesh Vancheeswaran courtesy Scroll.in (30 March 2022)