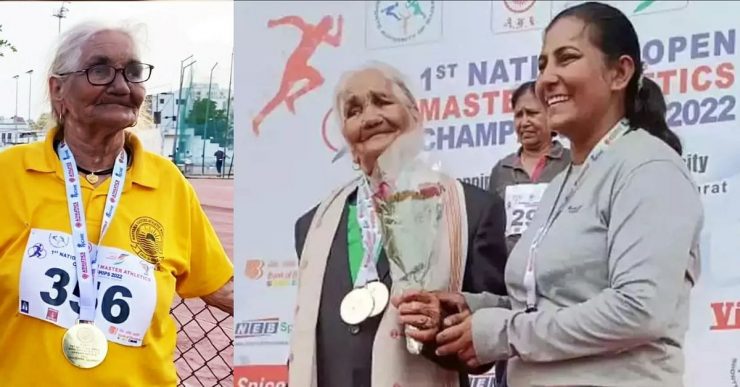 You can achieve your dream at any age. Here’s proof. Meet 105-year-old Rambai, who just created a new record in the 100-metre race. She ran the distance in 45.40 seconds at the inaugural National Open Masters Athletics Championships held in Vadodara, Gujarat.

The entire stadium cheered her on, as she was the only one participating in the race in the 100+ category. But that didn’t deter her spirit. There was no competitor above the age of 85.

Hailing from Kadma village in Charkhi Dadri, Haryana, this centenarian won two Gold Medals at the event on 19 June. She won the 200-metre race, too, with a timing of one minute and 52.17 seconds.

This determined lady took up running just a year back. She broke the record of 101-year-old Man Kaur who won gold in 100m in 74 seconds at the World Masters meet.

Her family members say they were a bit apprehensive about her participation, but her fitness and performance squashed their worries.

“My grandmother was determined from the word ‘go’, to take part in the event. Initially, we were a bit worried because of her advanced age, but given how fit she is, we were confident too,” said Sharmila Sangwan, Rambai’s granddaughter to PTI.

This is not the first win for this grandmother.

“My grandmother first participated in a race in November 2021 in Varanasi. She then participated in competitions in Maharashtra, Karnataka, and Kerala, and has bagged a dozen medals,” Sharmila added.
What’s the secret to Rambai’s fitness?

When asked what her secret to fitness is at this age, she said that she jogs every morning.

“I wake up early and go jogging. I do all the household chores myself. I also work at our farm daily,” Rambai told PTI.

She is also careful about her food. The pure vegetarian loves curd and milk. “I eat churma, dahi (curd) and milk,” she added.

Sharmila said that she consumes a lot of ghee and curd daily.

“Nani is particular about having about 250 grams of ghee daily and 500gm of curd. She also drinks 500ml of pure milk twice a day. She likes bajre ki roti (flat bread made of millet) and doesn’t eat much rice,” Sharmila said to TOI.

“No one can stop me now. I have always had confidence in myself. I now want to go abroad and participate in events,” says Rambai.

Next time you need some inspiration to start running, think about Rambai.