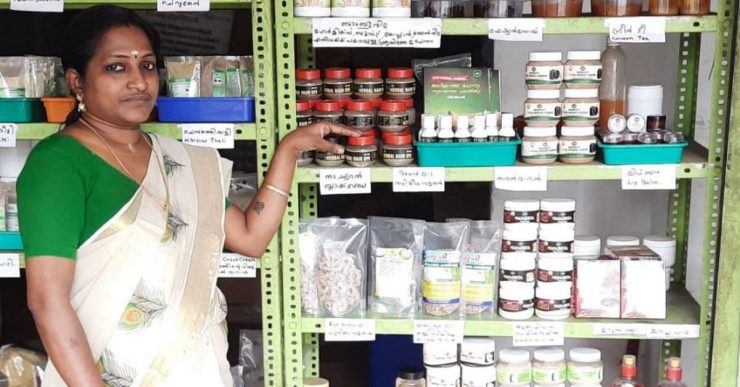 Doing something of her own brings immense joy and satisfaction for Alappuzha native Viji Sreekumar, who started her journey as an entrepreneur almost 10 years ago.

While she had to take up the role of a homemaker after marriage, Viji had always looked forward to starting a business venture at some point in her life. For a while, it was her husband Sreekumar who would earn for the family with his small scale coir business, until he began facing huge losses due to market conditions. Realising the need to step up, Viji decided to start a small scale business, as she had always wanted.

Today, she runs a flourishing small scale business of payasam mixes and different value-added products made out of bamboo rice under the brand name AVS and earns a revenue of Rs 50,000 per month.

“Ever since I started thinking of starting a business, I wanted to do something different and stand out from the crowd. That’s how I started making value-added products out of bamboo rice,” Viji tells The Better India.

Being a diploma holder in fashion designing, Viji says she first tried her hand at running a tailoring unit, but things didn’t work out. But with her passion for cooking, she didn’t have to think twice before deciding on taking up a food business.

So in 2012, she started making homemade achars. While the business was slowly picking up, she decided to add more products to her business. “When it comes to cooking, I have always had a thing for making payasam. So with my achar business, I started making payasam for events conducted by Kudumbashree, as well as other government and private organisations,” she says, adding that she travels across the state and even outside to showcase her culinary skills through payasam stalls.

Viji says she loves experimenting with different flavours and ingredients. “I am a person who loves variety in everything. So, when I started making payasam, I wanted it to be unique. Now I have recipes of over 100 varieties of payasam,” she says, adding that she makes payasam out of ash gourd, Chinese potato, carrot, beetroot, raw jackfruit and so on.

She says that at the events, especially outside Kerala, her payasams were selling faster, with requests coming in to send food via post or couriers as well. “That’s when I realised the scope for making payasam mixes that are ready to make, as well as ready to eat retort processed payasam that can be stored for almost six months,” she says.

Viji, who had been on a constant lookout for adding more products to her business, came to know about the goodness of bamboo rice and the scope of making value-added products out of it. “I started researching bamboo rice and learnt that for the adivasi community, it is essentially a health secret. It’s rich in fibre, proteins and vitamins. It is also considered to be good for diabetics,” she adds.

Thus, Viji started experimenting by making bamboo rice payasam, which became an instant hit. “I knew that I could do more with such a healthy grain. I also wanted to transform it into something where its goodness can be utilised in a better way,” she says.

She says it took a few years for her to come up with the right ingredients for the protein-rich supplement. “The bamboo rice-based protein supplement is made using natural ingredients. The product is lab tested and has good nutritional value. It can be consumed either with milk or water and can be used while making shakes or smoothies.”

Bamboo Vita, priced at Rs 490, is the fastest-selling among all her products, says Viji, who has now expanded her business to beauty care products as well. “I make products like face packs, hair packs, lip balm, hair oils and so on which are completely made with organic ingredients,” she adds.

She also owns a small organic shop near her house at Pathirapally, where she showcases all her products. She also sells her products through her website and also through Facebook and WhatsApp.