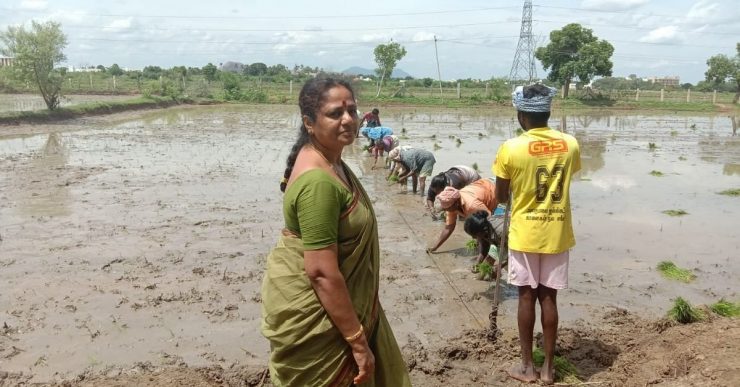 Conviction and perseverance are two of P Buvaneshwari’s biggest strengths. It’s why she was able to convince her in-laws to farm organically, a method that was completely in contrast to their usual way of farming.

Bhuvaneshwari requested her family to give her 1.5 acres of unused area on their 10-acre farm to cultivate crops naturally. No one, including the farm labourers, had any hope from her.

But from her experience of kitchen gardening, she believed that if the right methods are executed, it is possible to shift from chemical to organic farming. She first began experimenting in 2013, and today, almost eight years later, the entire 10-acre farm is free of harmful chemicals and pesticides.

While discontinuing the use of chemicals is a noble thought and the right step towards a healthy lifestyle, it is no easy feat to achieve by any means.

“If the land and crops, which are so used to chemicals, stop receiving them suddenly, the reaction is going to be unfavourable. The yield will be affected or even damaged. It is thanks to my upbringing, habits and knowledge accumulated over the years that we were able to ensure a smooth transition,” Bhuvaneshwari tells The Better India.

The 54-year-old was born into a family of farmers in Kalyanaodai village in Tamil Nadu’s Thanjavur district. She grew up in the lap of nature with the Kaveri River flowing close to her house.

“Since my childhood, I had easy access to a variety of fruits and vegetables grown on our farm and village. Mother nature was kind enough to provide us with materials that made our quality of life easier and better. If I craved blueberries, I could go and harvest some from the blueberry plants growing nearby. If mosquitoes created a nuisance, we used to pluck ‘nochi’ leaves and scatter them around us at night to sleep peacefully. It is this intimacy that I had with mother nature that piqued my interest in farming, coupled with the thirst and eagerness to learn. As years progressed, I continued observing the farming activities carried out by my family, and that very expertise came handy,” she says.

After marriage, she moved to Pudukottai Karuppayurani village in Madurai, and pursued farming by growing flowers in a tank-like structure filled with soil called thotti, located in the backyard of their house. Within six months, the backyard was blooming with roses, hibiscus and jasmine.

When Bhuvaneshwari decided to get into full-time farming, she had two issues to resolve on priority — stop using chemicals, and bring back native rice varieties.

‘Steps I took make my land organic and highly fertile’

Before Bhuvaneshwari took over, the farm was growing hybrid paddy that was water intensive and prone to pest attacks. Thus, the land needed excessive use of chemical fertilisers and pesticides as pest repellents.

“The green pigmentation of the crops had started fading, thereby turning the crops white. During the summer and drought season, our crops would suffer badly,” says Bhuvaneshwari.

She wanted a foolproof plan to grow vegetables, paddy and fruits organically. For this, she approached Vanagam Nammalvar Ecological Foundation in Karur and learnt organic farming steps in detail.

After success on 1.5 acres, Bhuvaneshwari expanded to the rest of the land.

Here’s what she uses to make her land fertile, increase yield, and keep the insects at bay: She began with two varieties by borrowing seeds from a farmer from Ariyalur. She used the aforementioned organic fertilisers and sugarcane mulch to rejuvenate the field and cultivate the crops. Alongside paddy, she sowed leguminous plants to restore nitrogen. This hack worked as the field yielded around 25 kilos of both the rice varieties.

“Initially, the crops suffered, and people told me to use chemicals. But I did not give in, and continued spraying my homemade mixtures. It took some time but eventually gave good results,” says Bhuvaneshwari.

She also implemented the intercropping method to grow crops such as tomato, eggplant, green chillies, and snake gourd, along with leguminous crops like moong dal, urad dal.

In between tomatoes and eggplant, which require a lot of nutrients, she planted spinach. “Spinach utilises optimum sunlight to grow well and thereby helps plants around it grow as well. Leguminous crops help other crops grow as well, due to nitrogen fixation properties,” she adds.

A good yield is reflected in the family’s revenue growth.

“Per cycle of the ‘karuppu kowni’ rice, the yield produced amounts to around 72 kilos and revenue per kilo is anywhere between Rs 180 to Rs 200. I sell it at Rs 200 against the market rate of Rs 350,” she says.

To assure people of the quality before they purchase, she hosts students, farmers and customers on her farm. She gives them a tour and demonstrates her organic methods, alongside offering cooked food such as kozhukattai, kanji, halwa, paniyaram, puliogare, lemon rice and more, which she prepares using rice varieties from her field. “I have eaten Bhuvaneswari’s karuppu kowni rice. Within three months, my sugar levels have reduced from 400 to 150. There are innumerable benefits about which I can go on and on. I feel more energetic, and the best part is that the rice tastes really nice,” says Nikumba, one of Bhuvaneshwari’s customers.

A humble Bhuvaneshwari does not shy away from sharing the failures as well. According to her, these will assure people when they face similar challenges.

She says that when she tried digging small pits and channels to harvest rainwater, they didn’t prove to be effective for her farm.

“These water saving practices are dependent on a lot of factors, and they vary with every area and terrain. Hence, many water conservation methods might prove to be ineffective. I do intend on exploring other options in the future,” she says.

‘Advice and hacks that I swear by’